This sci-fi/noir starts off as one of the silliest movies I’ve ever seen. Eddie Constantine plays a secret agent named Lemmy Caution. "Eddie Constantine" may just be the best name for an actor in a noir movie ever. He's got a pretty great noir face, too. 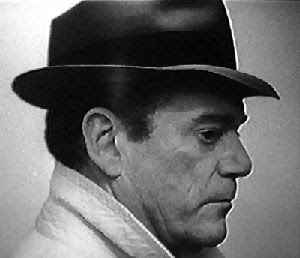 The movie has all the noir conventions: Caution has voiceovers between scenes, he wears a trenchcoat and fedora and smokes like a chimney (nobody else seems to dress like him, either). Women are betrayers and seductresses. In fact, in Alphaville, it’s their job; whenever Lemmy goes back to his hotel room, he’s accompanied by a “Seductress, Third Class.” It’s all so over the top, though; you’re never sure if it’s intentionally campy or just campy.

The sci-fi aspects of Alphaville are less cartoonish, although they’re definitely a product of their time. Alpha 60, the computer that controls everything in Alphaville, fills an entire building with whirring tape drives and vacuum tubes. He speaks in a weird monotone, and gives rousing speeches to the citizens of Alphaville:

MEN, BY THEIR OWN ACTIONS OVER THE CENTURIES, WILL GRADUALLY BE DESTROYED. I, ALPHA-60, AM ONLY THE LOGICAL MEANS OF THAT DESTRUCTION.

You can see how he got control of the city: such a politician! Anyway, in Alpha 60 you can see the ancestor of HAL 9000, Skynet, and a whole lot of other sci-fi computers. The closest analogue to Alphaville, as dystopias go, is Camazotz, the planet controlled by a giant brain in A Wrinkle In Time. There, as in Alphaville, central planning has gotten a little out of control, and the only defense humans have against conformity is the one thing cold, logical machines (or brains) don’t have: love. You can probably guess how this plays out in Alphaville; Lemmy teaches a beautiful young woman how to be fully human, &c., &c., &c. I’m not sure how often this idea had been played out on screen by 1965, but I don’t think this was the first time.

Some of the later scenes in the movie are very effective, however, even if many of the big concepts fall kind of flat. There’s a really frightening scene where Lemmy and Natasha (the girl who falls for him) attend an execution. It’s held at a swimming pool. Spectators watch from a balcony as the condemned, one at a time, march to the edge of the diving board. They’re shot there, and fall into the water; four women in bathing suits jump in after them to drown them if they have survived, and retrieve the bodies (so the next person can have a nice, empty pool to fall into, presumably). It’s pretty chilling.

One other thing to note: this movie was made for basically no money, and it shows. Some of the handheld camera work is really nice in a threadbare way, though—there’s a great shot where the camera tracks Lemmy across a hotel lobby into an elevator, goes up with him, and follows him out. The shot is repeated in reverse later in the movie; both times it looks great. There’s also a very nice shot of Lemmy and Natasha having breakfast in front of a television; all you see are their hands and the meal reflected in the dead screen.

I think the low budget actually helps Godard when it comes to the sets. He shot around Paris, picking the most depressing architecture he could find; it looks as dystopian now as it did then. The best moment of this type: Lemmy and one of Alpha 60’s technicians walk down an endless hall with closed doors on either side. As they walk, fluorescent lights weakly flicker to life all the way down the hall. “Ah! The day breaks!” says the technician. It’s a perfect moment. 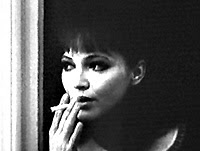 She kind of makes me want to give up writing and become a director. Preferably famous, and French, and in the 60s.


One thing I’ve been learning from watching these movies is that a lot of things that I thought were original ideas in movies I’ve liked were in fact done earlier, sometimes better, sometimes worse, but earlier. I thought I was really on the verge of something big, until I read this:

Turns out some jerkoff stole my big idea two thousand years ago.

Posted by Matthew Dessem at 8:19 PM

This film is so incredibly fresh and now..even today. There is nothing in it that makes me "look back" and say, oh, how much better it could be if they had x, y, or z.

It stands. I feel, almost as if its _still_ ahead of its time, of our time in fact! The cuts, shots, quickness of editing and story progression -- I don't see anything like this anywhere!

Case in point -- I went to see the "cutting edge" film, The Fountain. Boy, I liked it, but it positively LAGS compared to Alphaville. For as much information as The Fountain purports to tell, its really not that rich at all. Alphaville, on the other hand, flows with cool stuff right and left...and that's proven, as you write, by the number of feeder movies, scenes and devices that it's engendered.

I can't say enough good things about this film...I guess because I just finished watching it 1 hour ago (for the 3rd time in my life). It almost makes me mad. I see this movie, and the point of art really is to always go beyond what's been done. I think of all the money and movies that have been made and so few even come close to Alphaville.

I saw this a long time back, and may rewatch it; I get the impression I missed a lot the first time around. The Fountain I have so far not seen.

It IS intentionally silly. This is Godard, after all. He's the joking intellectual. I think you weren't expecting much from this film; you sounded a bit dismissive in your review, methinks.

I was just browsing for Alphaville pictures and ran into your review, and felt compelled to comment on it, as it is one of my favorite films.

You should watch it again, this time understanding its comic verve, its whimsical nature. Much of it is tongue-in-cheek, although the themes are ultimately rather serious. That is to say, the ruminations on poetry, Alpha 60's speeches, its very design, and even the pool sequence, are not supposed to be realistic, or chilling, at all - they are sardonic and intentionally overdone, like the cool scenes where Lemmy Caution beats up the henchmen following him. They are pastiche; Godard's playful jab at Noir conventions.

What you have to understand about Godard, is that even when he is being playful, he's being serious. Once you get that, you'll love him.

I definitely need to see this again.

I have to agree with the other folks here who said you might not be looking at the movie right way--for me what jumped out was Godard's connection to Surrealism; the bizarre, funny visual metaphors of Bunuel, the disturbing humor, etc. etc. That said, I love your page, which has launched me on my own "see 'em all" Criterion adventure. Thanks!

Glad you like the page and are on a similar adventure. I really need to revisit some of the earlier posts on this site -- I've become a better film viewer since I began, and I'm pretty sure my reaction to many of these films would be different now.

1. If you've seen later Godards, you may suspect as I do that he began (to the detriment of his art) to be completely fed up with conventional film making. By the 70's his films were basically unwatchable for this reason, but with Alphaville it's actually a bonus. How else could you possibly make a shoestring French sci-fi noir in the 60s that is of any value whatsoever?

2. The scene where Mr. Caution casually moves a hanging lamp just to watch the light effect, and the camera lingers on him for the same purpose, is so sublime that I'm surprised it wasn't worthy of one of your random comments. But we should celebrate the different strokes instilled in us different folks I suppose.

Anna Karina has been the great love of Jean-Luc Godard’s life. Their relationship and marriage lasted about six years. Karina was unfaithful to him and by the time Alphaville was filmed they had divorced. As the 60’s progressed he became increasingly suspect of America’s cultural influence and believed that it was responsible for a dubious sexual morality and culture of pleasure to which women in particular were susceptible. He felt that if Karina were free of these dominating influences she would be free to love him as she should. Alphaville was Godard’s attempt to allegorize his relationship with Karina.

The above information comes from a book called Everything is Cinema: The Working Life of Jean-Luc Godard, by Richard Brody. But I’m a bit confused. I thought Americans were the ones who were sexually pent-up and forever wagging fingers at those licentious Europeans. Maybe it’s Godard that’s confused. It does seem like Karina kind of screwed him up.

But with that in mind, the most poignant part of the film is when Natasha Vonbraun (Karina) asks Lemmy Caution (Eddie Constantine) what love is and Godard, in answer, cuts to a choker close-up of his exquisite ex-wife. There's a tremendous amount of feeling in that shot. The whole film is a journey through the night to a time when Karina can say once more, in Alphaville's final words, what Godard longed to hear: “I love you.” In a film that is at times funny and beautiful, but all too often impenetrable and downright weird, I found this unexpectedly moving.

Late to the fair again - I'm going back through the movies to catch up, and finding things I want to comment on. Sorry about that, Matthew.

Interesting point about Godard and Anna Karina's relationship, and how it might have affected ALPHAVILLE, John B. I didn't know about that - though I did have a pretty good inkling of Godard's tongue-in-cheek approach to filmmaking conventions, as Jeff and Beau pointed out. Maybe I'd already heard of that before I saw ALPHAVILLE, but when I finally saw it (recently), I too looked at it as a European-style deadpan lampoon of hard-boiled thriller conventions like the actual Lemmy Caution stories (https://secure.wikimedia.org/wikipedia/en/wiki/Peter_Cheyney#Lemmy_Caution ) or Secret Agent OSS 117 (https://secure.wikimedia.org/wikipedia/en/wiki/OSS_117 ).

If you don't think ALPHAVILLE is primarily comic, check out how Natasha disarms Caution by suddenly telling a (completely out of character) joke, so he doubles over laughing and can be clobbered by a pair of hardcases! Also, look at the foolish ease with which Caution escapes, time and again, his pursuers - and the deadpan absurdity of the fights and shoot-outs (making an artistic virtue out of low-budget necessity).