I Know Where I'm Going!, 1945, written and directed by Michael Powell and Emeric Pressburger.

After having such mixed feelings about the gap between the formal and technical brilliance of Black Narcissus and its toxic cultural context,1 it was a relief to see Powell and Pressburger on less cringeworthy ground. Thematically, a lot of I Know Where I'm Going! is familiar: a Western worldview runs smack into something older and more primitive and basically falls apart. This time the part of the Raj is played by the Hebrides, so there's a lot less cultural and political baggage. Unless, of course, you're a member of the Scottish National Party, in which case it's Black Narcissus all over again.

Like Black Narcissus, this one's a genre-jumper. By the end of the film, it's a romance—after a brief stint in Jack London man v. nature territory—but the opening is straight from American screwball comedy. We're introduced to Joan Webster during the opening credits as a baby, while a stentorian voiceover tells us:

When Joan was only one year old, she already knew where she was going. Going right? Left? No. Straight on.

Later scenes during the credits characterize her as a snob and a striver: she insists that Santa bring her real silk stockings, and she has no time to waste on her schoolmates. When we first see her as an adult, the camera reduces her to a pair of legs plowing straight through a crowd: 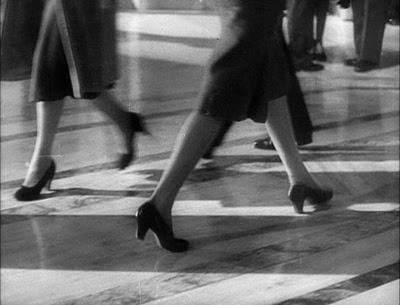 The last time I saw a movie use its opening sequence to portray its protagonist as a relentless freight train of ambition and desire, Daniel Day-Lewis was digging for oil. Of course, screwball comedies have always relied on characters who are completely unstoppable: think of Cary Grant in His Girl Friday, or Katherine Hepburn in Bringing Up Baby. It takes an incredible amount of charm to pull off a character like that without souring the tone of the film (which is why Grant and Hepburn usually got those roles). Powell and Pressburger apparently wanted to cast Deborah Kerr, but had to turn to their second choice, Wendy Hiller. It was a fortunate accident, because Hiller has the same combination of overconfidence and blithe indifference to the world around her that characterizes Hepburn's best comedic roles. 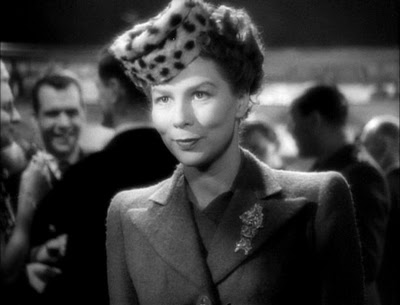 Hiller needs all the charm she can muster, because her character is pretty dreadful, at least at the start. And here's where we move away from the classic romantic comedy template: the "unstoppable force" characters are usually on the side of the angels: they're the ones that are absolutely sure that love will conquer all. It's the other character who's allowed to have all the wrong goals. Usually those goals are understandable and innocuous, no matter how misguided: authenticity, Ralph Bellamy, an intercostal clavicle, or Ralph Bellamy. Joan Webster is considerably less likeable.

In Hiller's opening scene, she's telling her father, a middle-class bank manager, that she's leaving town that very evening to be married. When he asks who the groom is, she shows him her works pass for Consolidated Chemical Industries: 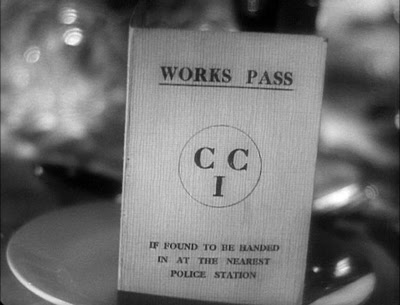 You can't marry Consolidated Chemical Industries, but you can do the next best thing and marry its chairman, Sir Robert Bellinger. They're to be married in the Hebrides, as she puts it "away from... people." When her father protests that Bellinger is as old as he is, she replies, "And what's wrong with you, darling?" Like I said, pretty dreadful.

Her motives are perfectly clear and perfectly deplorable: Bellinger's her ticket into the cocooned life of the filthy rich, where timetables are planned out in advance, everything is arranged, and absolutely nothing ever has to be done for oneself. She crosses the threshold at the train station, when one of Bellinger's factotums hands her a neatly typed itinerary. 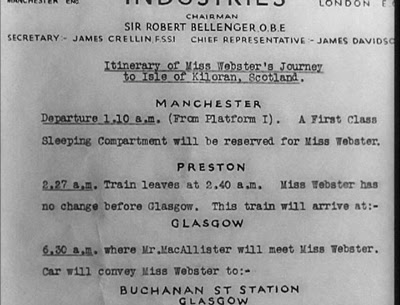 Powell and Pressburger make Joan's shallow venality abundantly clear in a dream sequence while she's on the train. After fantasizing about being literally married to Consolidated Chemical Industries, she envisions her life to come: inside a bubble made from the plastic that encases her wedding gown, surrounded by lots and lots of money. 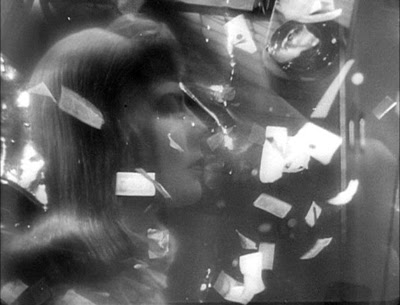 So how do Powell and Pressburger get away with having such a horrible person as a heroine? It's not just Wendy Hiller's performance (although that's a lot of it). The tone of the first act is much more comic than the rest of it; we're continually reminded that we're in a comedy. They go so far as to have a Playtime-style visual pun, tracking in tightly on one of Bellinger's agent's stovepipe hat: 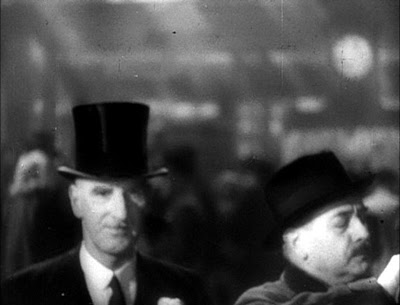 And then dissolving from the hat: 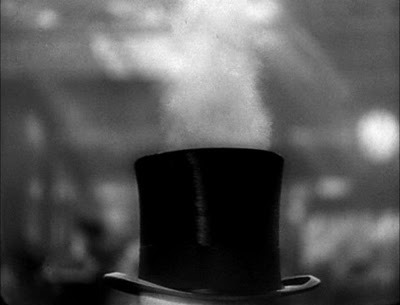 To the smokestack of the train as it prepares to leave the station. 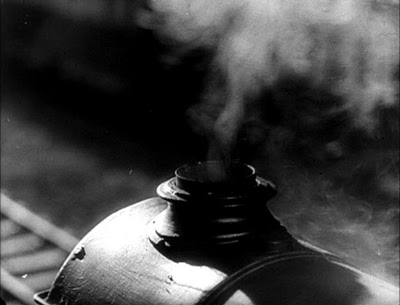 I think the jokes are more overt here because as long as it's a comedy, we know Joan is being set up for a fall. Once fog and choppy water prevent her from reaching the island where she is to be married, I Know Where I'm Going! slows way down. There's no place in a film like Bringing Up Baby for a long mournful shot of the landscape, but Powell and Pressburger (courtesy of Erwin Hillier's cinematography) give us just that: 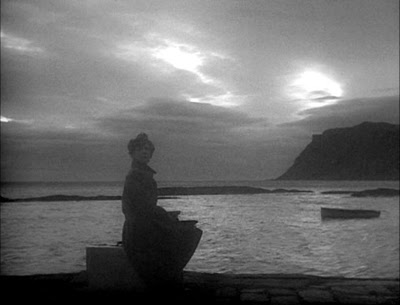 If the first act had moments of languor like the second act does, I don't think there's anything Wendy Hiller could have done to keep audiences from hoping she'd drown.

The change in pace gives Joan time to fall in love with the Scottish countryside, and especially with Torquil MacNeil, a Naval officer and down-on-his-luck Laird whose ancestral home is the island Joan's fiancé is renting. Roger Livesey wisely underplayed the role: he's the straight man to Joan's manic energy. 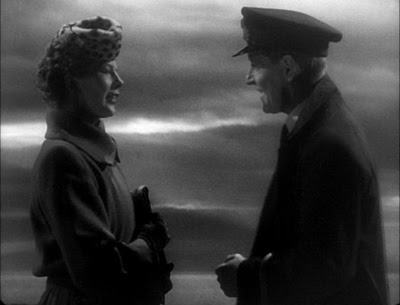 That's not to say that tone of the film changes entirely; there are a few characters straight out of drawing room comedy. The best of these is Colonel Barnstaple, an eccentric falconer, eagle trainer, ex-military man, and cook. He's played by Captain Charles William Robert Knight, M.C., F.R.P.S., F.Z.S., and it doesn't seem to be much of a stretch for him. 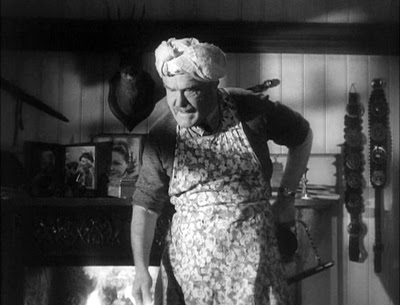 And although they're not onscreen much, special notice must be given to the Robinson family, upper-class British twits who provide Joan with a chilling glimpse of her future with Bellinger. 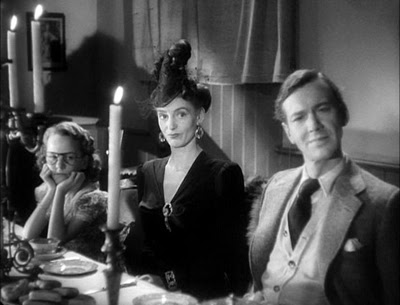 That's Catherine Lacey, Valentine Dyall (also in Brief Encounter, as Alec's sallow, insinuating friend), and Petula Clark. Yes, that Petula Clark. Her performance suggests she could have had a great career in Children of the Corn-type-roles, if things had gone differently. 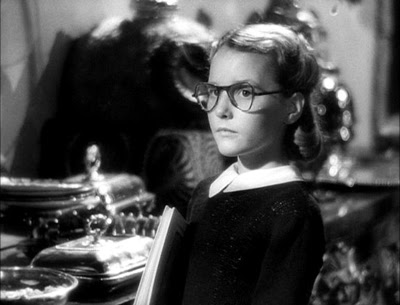 Powell and Pressburger background the comedy in this section of the film to give Joan and Torquill breathing room (they could have done a great deal more with the Robinson family, for instance), and the film transitions into a straight romance. Powell apparently loved Scotland, and this section of the film pays careful attention to the local scenery and customs. The highlight is a sequence at a céilidh to celebrate a diamond wedding anniversary. 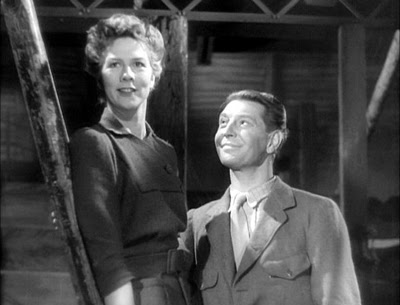 Joan being Joan, she doesn't react well at all when she realizes she's headed off course (and falling in love with Torquil). Desperate to wrap herself back up in Bellinger's money, she bribes a local boy to take her across to the island despite the weather. And this at the height of Scotland's whirlpool season! 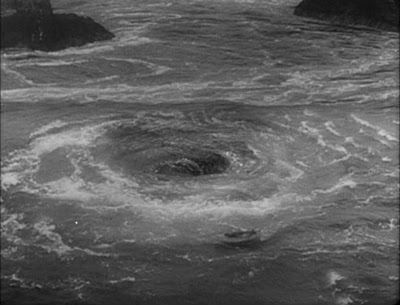 Torquil is dense enough not to know why she's leaving. Fortunately, as is customary in movies of this type, he has a worldly-wise friend who sees what's happening, played with witchlike intensity by Pamela Brown. 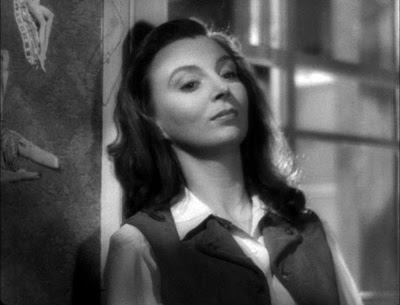 Torquil rushes down to the boat and insists on going along, and once again we're in a different sort of movie. The boat sequence could be in a Jack London story, except for the mythical whirlpool (it's called Corryvrecken, and Powell and Pressburger set it up better than I did). It's tense, tight bravura filmmaking, and nothing in the film's screwball-like opening would lead you to believe this is where things were heading.

But despite all the genre-hopping, the whole thing hangs together. The film's finale is the perfect embodiment of Robert McKee's2 advice about endings: Powell and Pressburger give the audience exactly what they want, but in an way they don't expect. In a movie with a mad British falconer, a giant whirlpool, and Petula Clark, you're probably wondering what could possibly be unexpected. Well, I'm. not going to tell you. 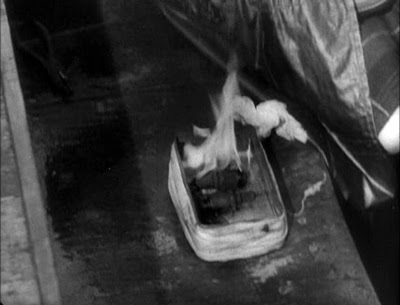 And reconnect everything, on camera: 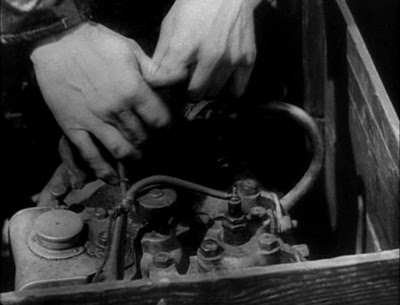 You could make this sequence without those details, but it works here the same way it does in Rififi, ratcheting up the tension by dwelling on every step Torquil has to complete to save their lives. 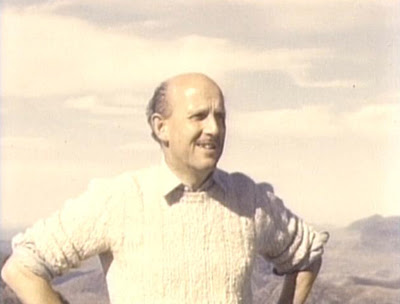 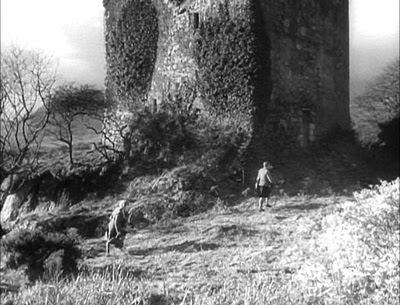 uses a body double and the actual castle, but the medium shot has Livesey on a set (notice the tree that suddenly appears to Livesey's right). 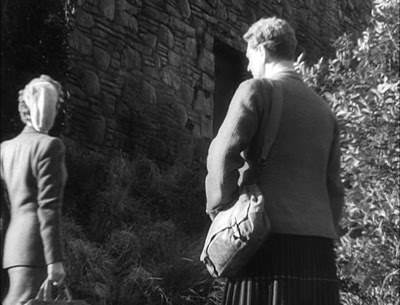 As obvious as that is when comparing one frame to the next, while the movie is playing, it's seamless—I wouldn't have noticed at all if it hadn't been pointed out. 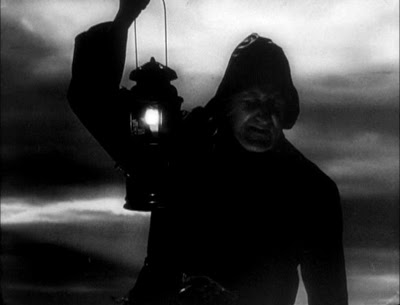 He was equally well-cast that same year as Abel Magwitch in Great Expectations. 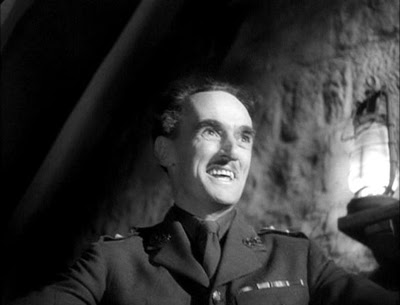 And that's why I couldn't remember where I'd seen him, because the last time I'd seen that face, it was considerably less pleasant. That's John Laurie, who played the horrible crofter in The 39 Steps. Fortunately, the DVD also features an excerpt from The Edge of the World, Michael Powell's first film about the Hebrides, in which Laurie plays a bit closer to type: 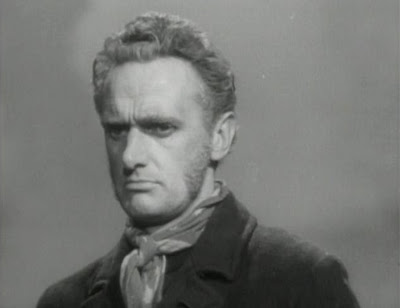 That's the John Laurie I remember!

1If only they'd given up on recreating the subcontinent at Pinewood and set Black Narcissus in Oz. Or outer space.

I saw Play Time on 70mm at the Aero a few weeks back, and it occurred to me that this site's focus on DVDs obscures the fact that virtually everything in the Criterion Collection was designed to be seen in a theater (with a few exceptions). So for those of you in Los Angeles, here are some of the films from the Criterion Collection that are showing in movie theaters during the month of September. If anyone wants to e-mail me listings for shows in other cities or venues, I'll be happy to add them to this post; I'm going to try to put this together on the first of every month.