As some of you know, I currently work as a systems engineer for New Line Cinema. If you read the news, you know it won't be long before I no longer work for New Line Cinema. I don't know when my last day will be, and I want to work until then, so I get my severance package. But I'm thinking about my next move. I know some of the people who read this blog work in the entertainment industry here in Los Angeles; if any of you know of an opening that you think I'd be suited for, please let me know at mdessem@gmail.com. My IT-related résumé is available online here, but I'm not solely considering IT work, or the entertainment industry. I'm up for just about anything, as long as it doesn't involve watching Salò again.. Thanks!

In August of 1973, my father and mother moved into a strange little house on Massachusetts Avenue in Cambridge, where my father was starting law school. The house belonged to an elderly woman who promised her husband before his death that she wouldn't sell the home they'd shared. So while the rest of their neighborhood was bulldozed and turned into office space and retail, her house just sat there. And as Google Maps reveals, it's sitting there today, defying the architecture around it: 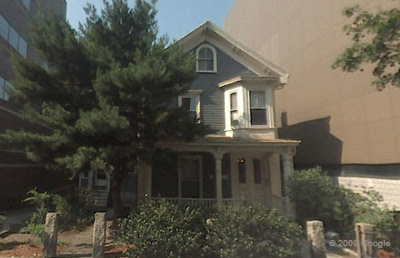 My parents had the front of the second floor, which didn't have enough room for a full-sized bed. But like many old houses, this one came with a window seat (pictured) and a terrible curse (not pictured). The curse worked like this: the house was right across the street from the Orson Welles theater. So at least once a week, some moviegoer would park in front of the driveway, blocking everyone in. And that August, the movie that inspired such careless parking was The Harder They Come, which began an unprecedented seven-year run at the theater that summer. My parents have always said that The Paper Chase—opened that October, set at Harvard Law—was sort of their theme movie for the year, but it seems to me that The Harder They Come had a more direct impact on them, in the sense that they kept having to call tow trucks because of it. So full disclosure requires me to point out that this film caused my family actual, measurable harm. But it's impossible to stay angry at a movie with this much low-rent charm. 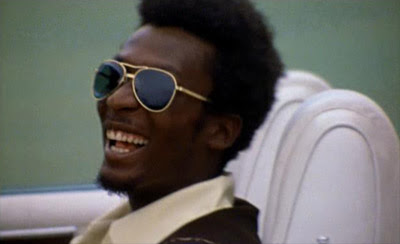 That's Jimmy Cliff, undoubtedly about to park that car in front of my parents' driveway and make my dad late for class. He plays Ivan Martin, a kid from the country trying to make it as a singer in Kingston, Jamaica. Ivan is literally just off the bus: 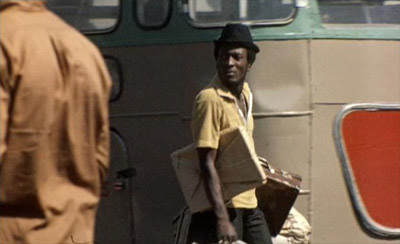 And naïve enough that the first thing he does is load all of his worldly possessions onto the garishly decorated pushcart of a young man who is nice enough to offer to help him carry them. Here's the last glimpse he gets of everything he owns: 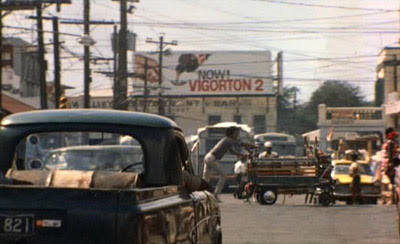 Ivan has big dreams, but not a lot of follow-through. On his first day in Kingston, he meets a gambler who is having a suspicious run of luck at dominoes, and that pretty much sums up his chances. Kingston's economy is a rigged game, and nobody makes it from here: 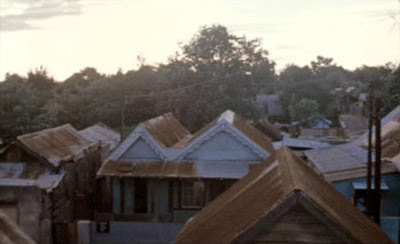 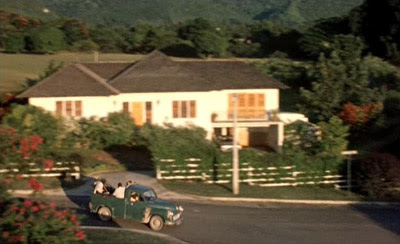 Ivan's no exception to the rules, but he makes a pretty good show of trying. For the first half of the film, he moves from one unsuitable father figure to another. The first is a ferocious preacher played with brio by Basil Keane: 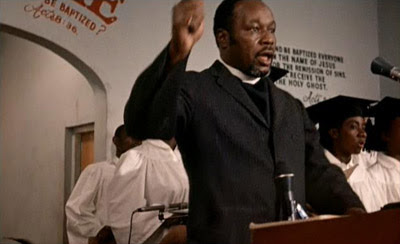 You can imagine how well the preacher gets along with a laid-back reggae fan like Ivan—for one thing he thinks the music Ivan listens to is called "boogie woogie." But living here beats the streets, and Ivan at least manages to scrounge up enough money to buy an unforgettable hat. 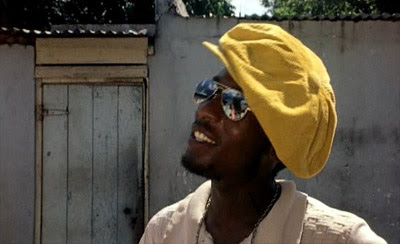 You can see where this is going; the preacher has a young ward, Elsa, and his intentions toward her are perhaps not as honorable as he tells himself. She's played by Janet Bartley: 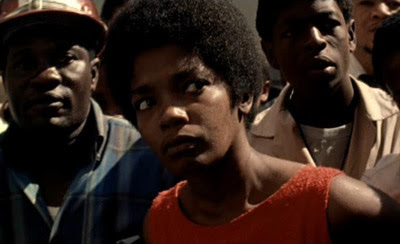 So it's no surprise that the preacher doesn't much like it when Ivan starts taking her out for rides on his bicycle (Sidesaddle! In heels!). 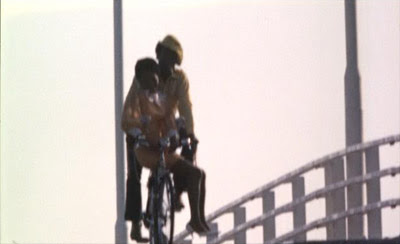 Fortunately, Father Figure #2 swoops in to save the day right when the preacher evicts Ivan. He's a music producer named Hilton, who gives Ivan the chance to make a record, out of pure love for music and enthusiasm about the young man's talent. Look up "avuncular" in the dictionary and there's a picture of Hilton: 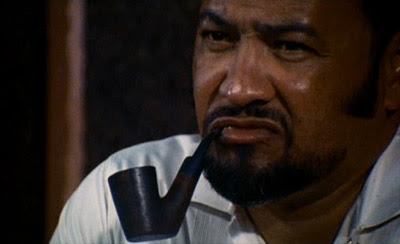 I'm just kidding. He does it for the money, giving Ivan a take-it-or-leave-it deal on his single: $20 for all rights in perpetuity. Without Hilton's go-ahead, no DJ will touch the record, no matter how good it is, so Ivan eventually signs it away. That's why you need an entertainment lawyer, kids. You think cars like this pay for themselves? 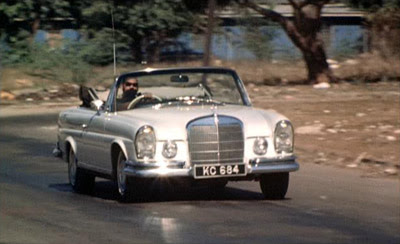 Shitty deal aside, Hilton does let Ivan record a song, which is as close as he gets to his dream. Here he is in the studio; this footage was shot of Jimmy Cliff actually recording the film's title song. 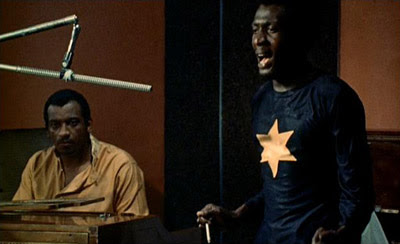 Which brings us to father figure #3, the only constant, reliable thing in Jamaica: 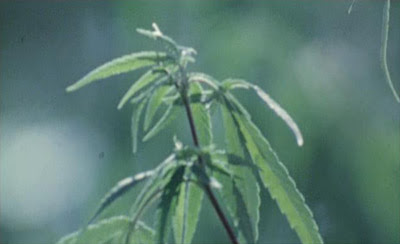 Ivan gets in on the ground floor in what everyone in the movie just calls "the trade," recognizing that there's little else of value coming out of their country. But as with the preacher and Hilton, he chafes against the raw deal he's getting. Unfortunately for Ivan, authority figures in the drug trade stay in power with harsher methods than preachers or record moguls.1 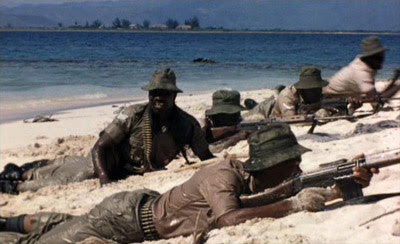 After Ivan kills a cop rather than be pulled over again, the second, weaker half of the film follows him on the run. He doesn't get to be famous the way he dreamed, but he's famous nonetheless. Luckily for Hilton, this means Ivan's record shoots up the charts while Ivan shoots up the countryside. Ivan is the kind of celebrity publicists dream of: he runs a pretty competent publicity campaign on his own behalf, sending the newspapers photos to run. 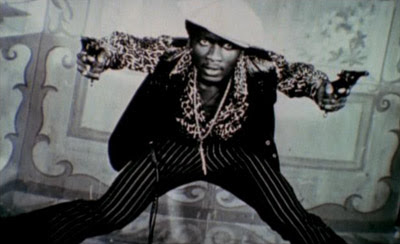 As you can see, he's modeling himself on Dillinger and Bonnie and Clyde. And things turned out pretty well for them, right?

The Harder They Come doesn't have an amazing screenplay, but it floats by on the strength of its other qualities. Almost the entire film is handheld, giving it a documentary feel, which in a way, it is. Henzell didn't hire actors to pick through a garbage heap for this shot, he just let his camera roll. 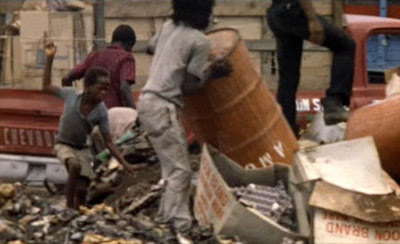 The further Henzell gets from this kind of documentary feel, the more the film suffers; compare his footage of the dump to this shot, from the knife fight that for me, marks the film's low point. 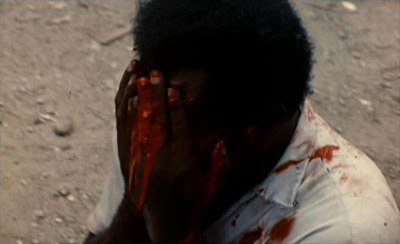 The realism of the rest of the film drowns in terrible fake blood. The gunfights don't play very well either. That means the second half doesn't work nearly as well as the first, because Henzell has a lot of plot he has to move along, which isn't his strong suit. But in the first half, the realism pays off in narrative terms. Henzell doesn't spend a lot of time exploring Ivan's desire to be rich and famous, becahse he doesn't have to. He simply documents the vast gulf between the upper and lower class in Jamaica, and that does his work for him. All it takes is a few carefully chosen details: Ivan has a copy of Playboy in the burnt out car he's made his headquarters; the first thing he does when he gets to Kingston is go to a Spaghetti Western, he looks longingly at a Stratocaster in a display window. Clearly, Western materialism is not serving him well.

I'm not qualified to judge the relative accuracy of Perry Henzell's Kingston or Marcel Camus's Rio de Janeiro, but The Harder They Come feels a lot more real than Black Orpheus. It's not just the camerawork; Henzell also let his actors speak in unapologetically Jamaican patois, so you'll want to watch this with the subtitles on. And then, of course, there's the music. Just as Black Orpheus brought Latin American music to the states, this was the first taste Americans had of reggae music. And the soundtrack is amazing: Jimmy Cliff, Desmond Dekker, and Toots and the Maytals: 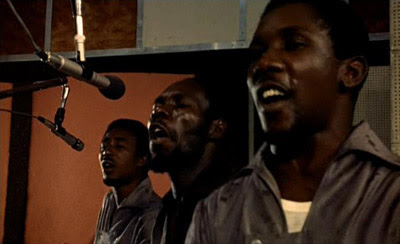 There's no Bob Marley and the Wailers on the soundtrack, but this created a market for "Catch a Fire." I would bet that many more people bought the soundtrack than saw the film, which is actually a pretty fair assessment of their relative merit. The soundtrack is a masterpiece, and the film isn't. But it's still well worth seeing, both for Jimmy Cliff's charismatic performance and Henzell's great footage of Jamaica.

My mother and father would probably disagree with that assesment. In all the time they were in Cambridge, they never crossed the street and bought a ticket. As far as I know, they never bought the soundtrack either. Maybe they didn't want to support the business that kept blocking their driveway, maybe they never found time, or maybe the dealbreaker was my dad's questionable taste in music.2 I like to think there's an alternate universe where they saw the movie, decided it appealed to them much more than The Paper Chase, and I had a very different childhood. But even if that's not how it would have played out, there's a shot in the movie that might have given them some perspective. It's of a corrugated fence on which someone has written:

There are worse things in life than a blocked driveway, after all. 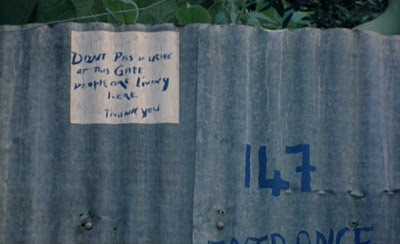 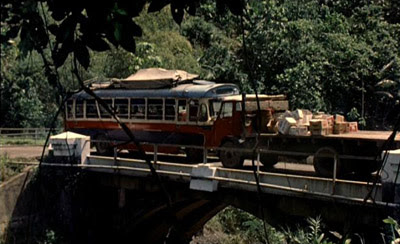 That shot apparently got audiences to erupt into cheers all over the third world. 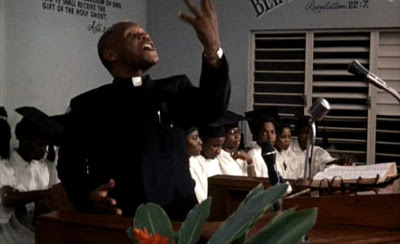 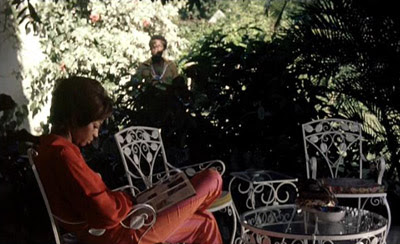 She's way better than Nancy Reagan on "Diff'rent Strokes." Come to think of it, she's better than Ronald Reagan in Bedtime for Bonzo.


1Well, maybe not modern-day record moguls, but this was filmed before Napster.

3The ten countries with only one film on the IMDB are:

4Mella Lahina's Niue: This Is Your Land, which appears to have been a student project.