The Blood of a Poet, 1930, written and directed by Jean Cocteau.

The Blood of a Poet might have been titled The Limits of Surrealism, or The Breakdown of Communication. Any interpretation of the film is going to be difficult to defend well, but most people would agree that Cocteau intended it to be an allegory about the development of an artist. Well, allegory isn't easy. I can think of only one modern example that is wholly successful: Animal Farm. From Orwell's example, we can infer the secret of successful allegory: talking pigs. The Blood of a Poet doesn't have talking pigs. It does have a cow that appears to be covered in scraps of an old map, but it's hardly the same. 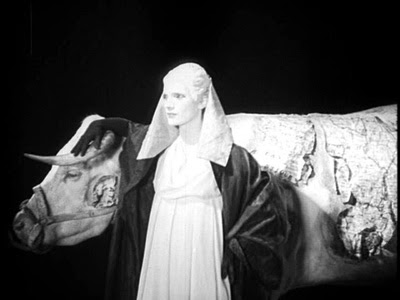 The film is one of the strangest things I've seen. It seems to have provoked reactions that range from adoration to blind hostility from the first time it was screened. Here's a bit of Variety's review:

On the face of it, this film represents six reels of scraped together footage from off the cutting room floor. A more vague or hopeless mess could not have resulted.

It's not as formless as the review makes it out to be, but that may be the most frustrating thing about The Blood of a Poet. One senses that beneath the seemingly random strings of images, Cocteau had a symbolic order in mind, but it's nearly unintelligible. He opens the film with an intertitle that begins:

Every film is a coat of arms. It must be deciphered.

Which is well and good, but I think most viewers would have better luck translating the Voynich Manuscript. Alas, that's not what this website is about. So here's what Cocteau gives us to work with.

The film is divided into four chapters, bookended by a shot of a tower collapsing. The first chapter is, for me, the strongest in the film. Not coincidentally, it has the closest ties to a recognizable world. The poet, the film's main character, played by Enrique Rivero, is working on a charcoal drawing, ignoring the battle of Fontenoy raging outside. 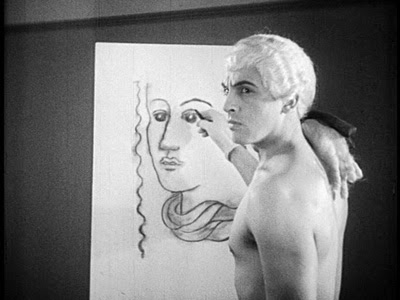 In something of a hurry to erase a mistake, he rubs the mouth off with his hand. To his horror, he discovers that the mouth has rubbed off on him, instead. 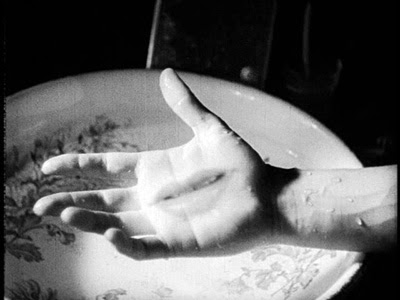 After he overcomes his initial disgust, he does what any red-blooded Frenchman would do; he makes out with his own hand. 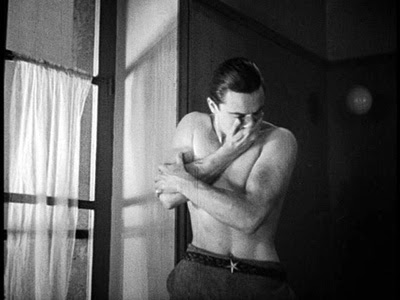 And then he rubs off on the mouth that rubbed off on him, as it were. 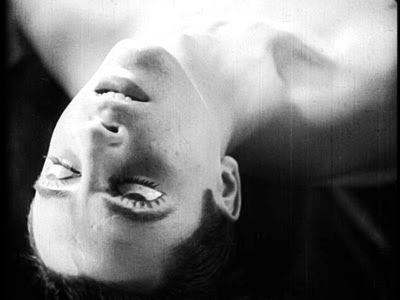 The painted eyes are disturbing, and Cocteau comes back to them later; but the mouth in the poet's hand is on another level entirely. One could imagine Cronenberg doing wonderful things with this material; it has that Swiftian disgust with the body that he gets so much mileage out of. But if this were a Cronenberg film, the early scene where a visitor recoils in horror when the poet offers his disfigured hand to shake wouldn't be an aside, it would be the whole film. Cocteau, in contrast, isn't interested in his character as a human being with a past and a future. The poet in the film matters only in the sense that he's a stand-in for Cocteau (marked with a star-shaped scar on his shoulder, Cocteau's signature). So he has no qualms about dropping the story of the mouth completely for the rest of the film. The goal, rather than telling a story that suggests other meanings, is to create a dreamlike series of images, something like music, which he called "nameless nourishment to our emotions and memories."

In the second chapter, the poet travels through a mirror to a strange hotel, which serves as a loose framing device for a series of bizarre scenes that he sees through keyholes. The mirror itself is a nice low budget effect; Cocteau cuts from this shot of Rivero feeling the mirror: 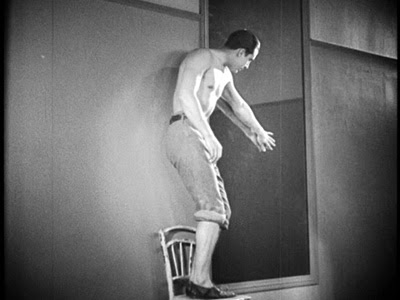 to a matching set built sideways for him to go through: 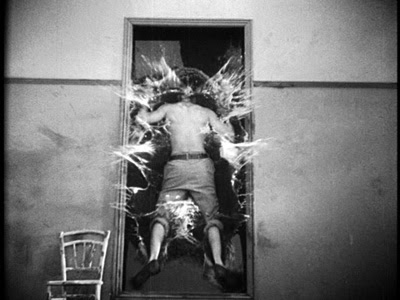 This is one of Cocteau's favorite tricks. The hotel hallway is also built on its side, and Rivera moves down it in a creepy approximation of walking (he's really sliding on his back and side). He uses the same effect again behind one of the hotel's keyholes, in the room labeled "Flying Lessons." 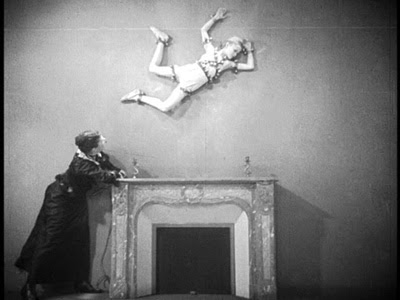 Some of the images the poet sees in the hotel are suggestive, and approach the kind of background to emotion and memory that Cocteau says he was aiming for. My favorite is a room where a man is shot in slow motion, falls to the floor, rises again as the film is reversed, then falls again. 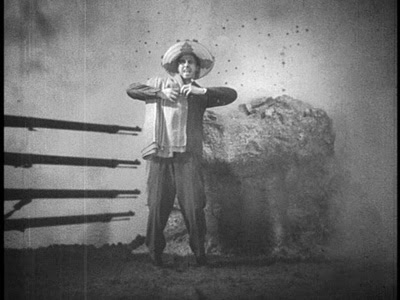 There's a beauty and a grace to the way he dies and comes back to life (and to the way the statue behind him breaks and reassembles) that got to me. I was reminded of, in no particular order, Prometheus, a passage in Slaughterhouse-Five, the phoenix, and Goya: 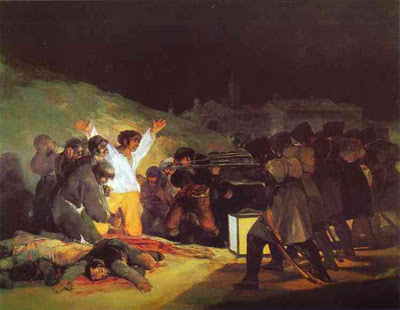 Why are the rifles on the wrong side? Because we're in a mirror, of course. This small sequence illustrates, I think, what Cocteau was aiming for with this entire chapter. Unfortunately, for every image that's evocative, he has two or three that are nonsensical and silly: 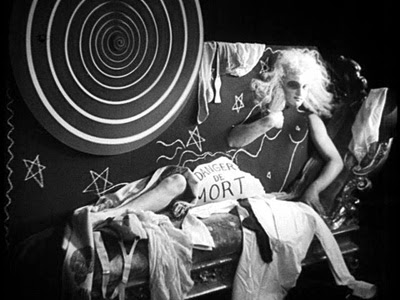 The context of the image above doesn't make its meaning any clearer, let me assure you. And the third and fourth chapters make even less sense. The third features a snowball fight in which a child is killed; in the fourth, the poet plays a game of cards on a table over the child's body.

Now if you accept The Blood of a Poet on its face as something nonsensical, you could watch it like you'd watch "Saturday Night Live": most of it's terrible, but occasionally something good happens, and you don't expect any continuity between sketches. What's frustrating is the sense that Cocteau is trying to create a unified film. It seems from one of Cocteau's lectures that he had a specific meaning in mind for much of what's on the screen. He says:

I could tell you that the snowball fight represents the poet's childhood and that when he plays the card game with his Glory, with his Destiny, he cheats by drawing from his childhood instead of from within himself.

Of course, he follows this by saying that each viewer should find their own personal meaning in the film, and insisting that he "wasn't thinking of anything" when he directed it. This is something of a cop-out. Either he had an intricate symbolic order in mind or he didn't. I'm inclined to believe he did, and that The Blood of a Poet is intended to express his ideas about the artistic process. But frankly, it's hard to tell what those ideas are.

Nabokov, when teaching The Metamorphosis, said that in an allegory "...if the enchanter leaves and the storyteller and the teacher remain alone together, they make poor company." In The Blood of a Poet, the teacher isn't entirely clear on what he's trying to say, and the storyteller gets kicked out of the room after about fifteen minutes. Which leaves the enchanter. Now a movie could succeed on those terms alone, but only if every image were compelling and evocative. That simply isn't the case here, and whenever the images aren't up to snuff, you're left with nothing. 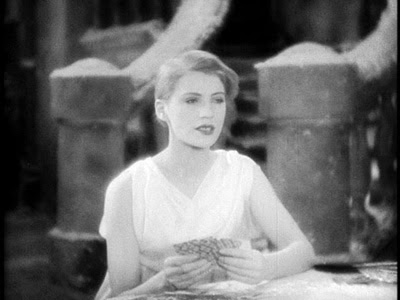 It's not her first appearance in the Criterion Collection, however. Tereza and Sabina talk about one of Man Ray's portraits of her in The Unbearable Lightness of Being. 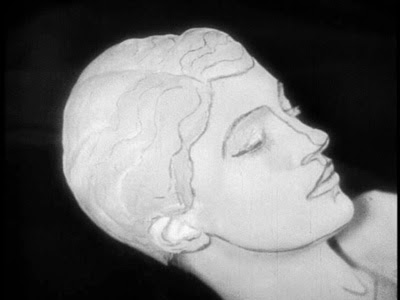 And in others, a she's a statue: 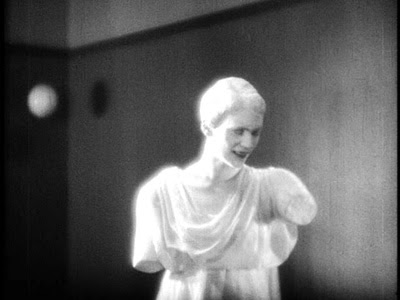 Cocteau reused the statue look for the caryatids in Beauty and the Beast. Finally, toward the end of the film, he has Miller walk around with eyes painted on her eyelids: 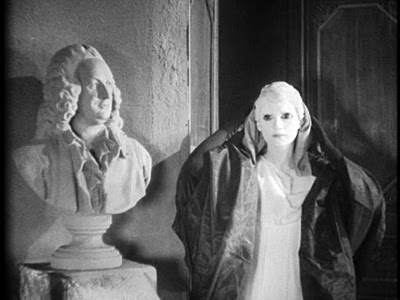 Right into the uncanny valley. Interestingly, the effect is only apparent when Miller looks at the camera. Look closely at the first still in the review and you'll see that her eyes are closed there, as well.