The Scarlet Empress, 1934, directed by Josef von Sternberg, screenplay by Eleanor McGeary, from the diaries of Catherine II, arranged by Manual Komroff.

From the Poetics right up until the post-structuralists blew everything up, literary critics spent a surprising amount of time on taxonomies of genre. Although it has glaring omissions, I think Northrop Frye's was one of the most elegant, if for no other reason than that he mapped his genres onto to the four seasons. I'm not going to do a better job of summarizing the correspondence than Martin Amis in The Information:

Autumn: tragedy. Isolation and decline, fatal flaws and falls, the throes of heroes.

Spring: comedy. Weddings, apple blossom, maypoles, no more misunderstandings—away with the old, on with the new.

Well, films have seasons, too. And although it's unlikely anyone running a studio has spent much time with Frye (or even Amis), archetypal criticism is alive and well in the studio release schedules.1 In fact, once you realize that summer blockbusters fit within Frye's definition of romance, it's nearly a one-to-one correspondence.2 We're in the height of summer right now, and more money than ever is ever being thrown at tepid variations on the monomyth. What better time to watch a film like The Scarlet Empress, which belongs wholeheartedly and unabashedly to winter?

On its face, The Scarlet Empress seems like a more common kind of story: a tragedy of overreach. Think of Citizen Kane, The Great Gatsby, or (from a certain perspective) Paradise Lost: stories of overweening protagonists who gain the world and lose their souls. And it's a period drama about royalty, with all the possibilities for lavish sets and costumes that affords. Those lavish costumes are going to be worn by none other than Marlena Dietrich, at the height of her powers: 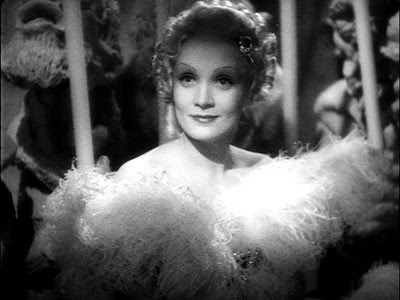 Bring on the Oscars. So on paper, The Scarlet Empress seems familiar. Against that familiarity, you begin to get a sense of how strange and perverse von Sternberg's film really is. Consider the opening sequence, in which we meet Princess Sophia Augusta Frederica, long before becoming (as von Sternberg puts it in an intertitle) "the ill-famed Messalina of the North." Young Sophia is played by Maria Riva, Dietrich's daughter, and looks every inch a princess. 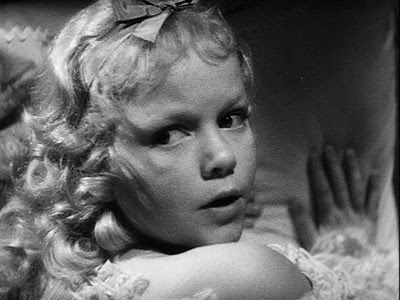 This is the "childhood innocence" sequence found in the kind of movie The Scarlet Empress sometimes pretends to be: Charlie Kane doesn't want to leave his father, Gatsby doesn't want to go to war, and Sophia doesn't want to marry a king—she wants to be a toe-dancer. But as she settles down to hear her bedtime story, she pulls a creepy-looking doll from beneath the covers and the tone changes. With a different score, the way the doll rises from beneath the blanket could play like the end of Don't Look Now. 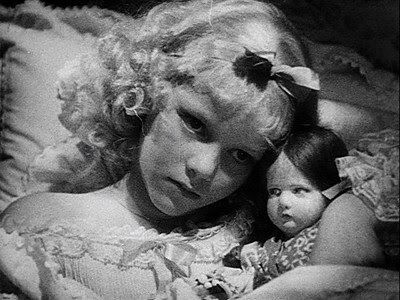 And the bedtime story she listens to? A history of "Peter the Great and Ivan the Terrible and other Russian tsars and tsarinas who were hangmen," represented on screen by a montage that would be hard to get past censors today, from a torturer whipping prisoners: 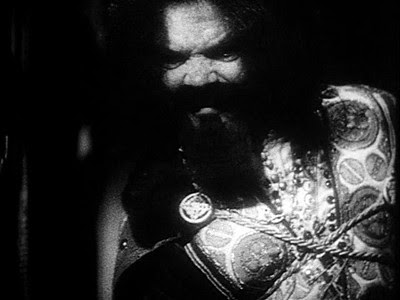 To naked women on some strange variation of the Catherine Wheel: 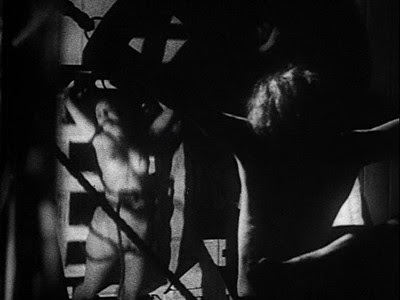 To, most memorably of all, a church bell with a human clapper. 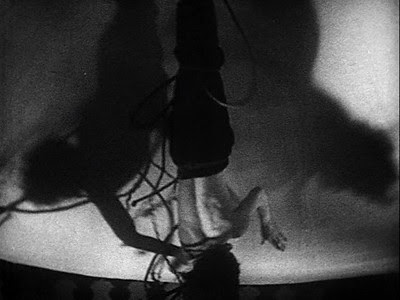 That last shot of the bell ringing rather famously dissolves into a match shot of Sophia's hoop skirt as she rides a swing toward camera. The film is filled with this sort of mordant wit, although there's nothing else that rhymes quite like that. There is a recurring visual motif, though, and it's found in the shot of the doll: something unexpectedly terrible emerging from its hiding place. You can see the same thing in a later shot of an obscene cuckoo clock, or this memorable image of a drill bit slowly making its way through the eye of an icon. 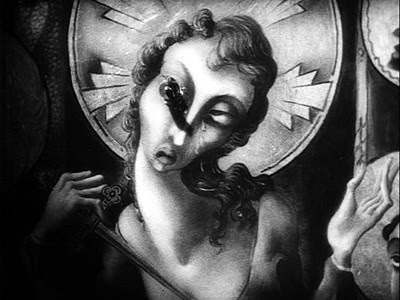 These shots are echoes of the film's greatest, darkest joke: Sophia's introduction to Peter III. Bedtime stories or no, when Dietrich first appears as onscreen, she seems as naive as her daughter, the kind of girl who believes in fairy tales. 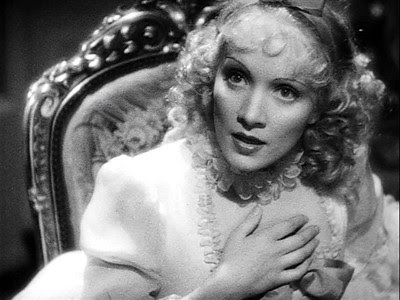 So when John Lodge, dressed like the cover of a romance novel, arrives as Count Alessi, envoy of the Russian court, you know exactly what kind of story she thinks she's landed in. 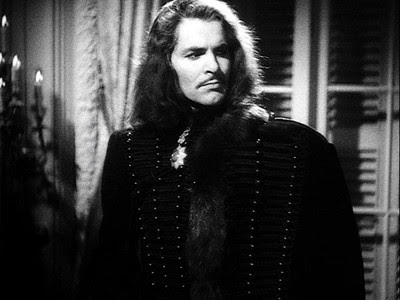 Which is, of course, exactly the kind of movie von Sternberg wants us to think he's making. Sophia's husband-to-be is, according to Alessi,

The handsomest man in the Russian court, tall and formed like a Greek god, a model in fashion and deportment which all of us strive to follow. His eyes are like the blue sky, his hair the color of ebony. He is stronger than a team of oxen and sleepless because of his desire to receive you in his arms. And he can also read and write!

It's the "read and write" that's the tell. When Sophia arrives in Moscow, and excitedly begs the Empress to let her meet her husband, we get the film's central image. A gigantic door is thrown open, and a strange procession emerges: dwarfs in formalwear leading hunting dogs, a steward, a glowering woman (the prince's mistress, it turns out), and, finally, the "handsomest man in the Russian court." 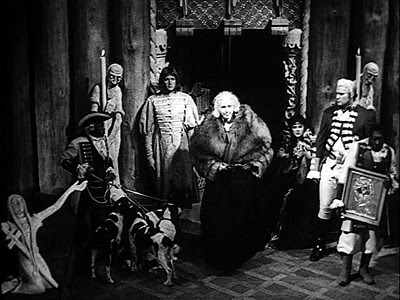 That's Sam Jaffe in his first film role, as a Russian Emperor and a horror-film jack-in-the-box. His Peter III is a sniggering madman: in his first interaction with his new bride, he insists on showing her his new "invention" (a toy soldier glued to a wheel; it's not clear what part of it he thinks he's invented), then rushes off to watch an execution. 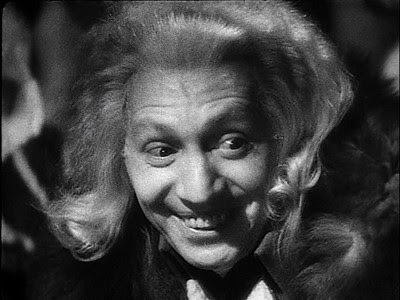 Oh, and that glamorous Russian Court we expect to see in this kind of film? With all the pomp and splendor and inevitable Oscars for the costume designer? Here's Empress Elizabeth in all her glory: 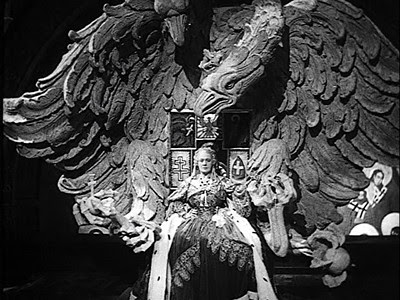 Believe it or not, that chair is one of the more subtle pieces of furniture in the film; Elizabeth has an entire table surrounded with chairs like this: 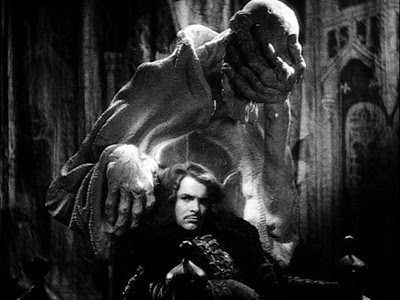 The joke is on Sophia, but it's also on anyone who came to The Scarlet Empress expecting a tasteful historical drama. This might be a good time to point out that the film's posters featured Dietrich in sable; John Lodge was on more of the lobby cards than Sam Jaffe. Von Sternberg really rubs the audience's collective nose in it, too; it's safe to say that fewer tickets would have been sold for a film about the relationship between a brood mare and royal half-wit: 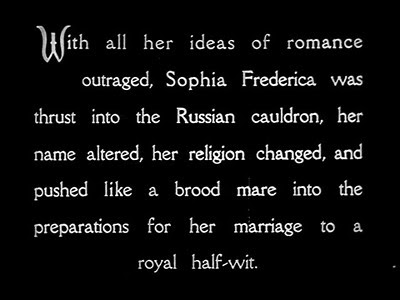 The final act of the film is basically about Marlene Dietrich being Marlene Dietrich, which is always a pleasure to watch. I can't think of another film from this era in which power and sex are so explicitly linked. There's actually a scene where Count Alessi kisses Sophia, then hands her a whip and demands she punish him for his insolence, which somehow sailed right over the heads of the Production Code Administration.3 She doesn't whip him—at that point in the film, she still thinks the handsomest man in the Russian court is losing sleep over her—but never fear, Alessi gets his. No one but no one could use her sexuality as a weapon like Dietrich. If she'd done nothing else her entire career, the shot of her coolly assessing Peter's mistress would have made her a cinematic icon. 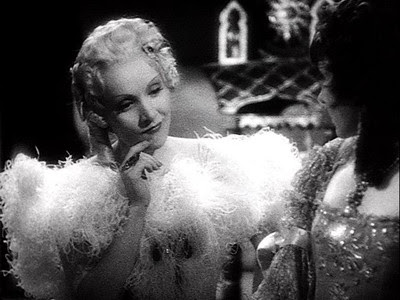 Clearly this isn't Sissi. But what's stopping it from being Citizen Kane? After all, Sophia gradually loses her humanity as she becomes Catherine; by the film's delirious end, she's arranged the murder of her husband. Well, for one thing, the tone's all wrong. Imagine a version of The Godfather Part II in which Michael reacted to Fredo's death with a rictus like Dietrich has here: 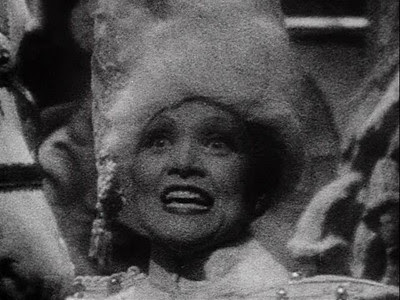 More importantly, from beginning to end, von Sternberg repeatedly makes the point that Sophia doesn't make any of her own choices. Early in the film, we watch Sophia's routine on entering her own parlor: she curtsies and kisses the hands of no fewer than seven people before speaking. Seven curtsies, seven kisses—and then one more, once she is introduced to Count Alessi. When she leaves the room (after being told that she's travelling to Russia to be married), von Sternberg makes us watch the same ritual, in reverse. Her every action is circumscribed by ritual, and by decisions that were made for her. When she does seize the crown, it's because her husband is insane and his mistress has promised her a shaved head and a trip to a convent. Aristotle would say that's a misadventure, not a tragedy. I say it's an inverted world, a mirror version of fairy tales and costume dramas.

Whatever it is, it's not for everybody. The Scarlet Empress was a box-office flop. But look, if you're feeling cheated, if you want the awards season biopic you were promised, all is not lost. As it happens, there is one grand tragedy in The Scarlet Empress, one character whose fatal flaw leads him headlong into catastrophe. 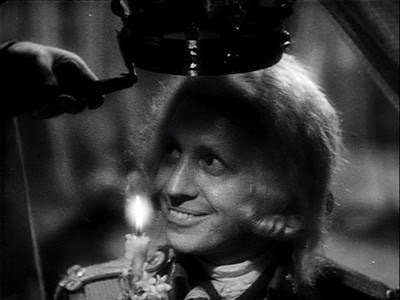 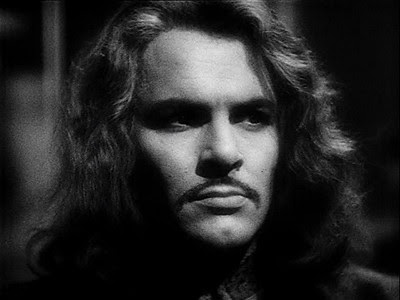 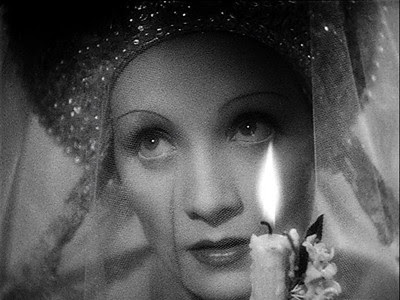 The effect is to make the wedding a scene that happens between betrayer and betrayed, not husband and wife.


1The last studio head who might have read Northrop Frye was fired in 2005.

2The reason it's not one-to-one is that very few people will wager a film's budget on satire. Unless you count the terrible, terrible films the studios dump in January as very subtle satires of Hollywood greed and incompetence. They certainly encourage me to embrace wintry thoughts, so maybe Frye wins again.