Novels rely greatly on tone and style, which don't have exact equivalents in filmmaking. Films rely on structure and plot. I think this is why Dickens is appealing to filmmakers; his novels are very plot-heavy and very carefully structured. But Dickens does two things that you can't do on film; his humor relies on understatement and he condenses the hell out of things. Which maybe you don't believe, looking at the length of his novels, but consider this scene; Pip has just seen his aunt's friend Mr. Wopsle give a truly disastrous performance of Hamlet and invites him back to his apartment for dinner:

...he sat until two o'clock in the morning, reviewing his success and developing his plans. I forget in detail what they were, but I have a general recollection that he was to begin with reviving the Drama, and to end with crushing it, inasmuch as his decease would leave it utterly bereft and without a chance or hope.

That's the dinner scene in its entirety. If you tried to film it, you'd be looking at a minute or two of screen time, and you'd have to show Pip's irritation and contempt through dialogue. Pip's brief summary of Wopsle's speech is funny, but listening to him give it would be murder. And after spending two minutes on it, you'd still have the tone wrong. Granted, this isn't a pivotal moment in the film; I doubt anybody remembers Mr. Wopsle and his theatrical career when they think of Great Expectations; I didn't. But Dickens is filled with little, two-sentence scenes. And if you're making a movie you have time for none of them.

Which is a very long-winded way of saying that Lean's adaptation is a radical streamlining of the novel. Orlick is gone, Mrs. Joe dies of natural causes, Herbert Pocket doesn't seem to have a family, Bentley Drummle is a jerk for no apparent reason, and on and on and on. If you haven't read the novel recently, you won't miss any of it; Lean boils the plot down to the bare minimums: Pip's betrayal of family in search of wealth, Abel Magwitch's shadowy malevolence, Miss Havisham's doomed existence. I think he succeeded brilliantly; this is one of my favorite adaptations.

Great Expectations should, of course, be judged on its own merits as a film, not on any kind of imaginary scorecard comparing it to the novel. The movie won two oscars, for Guy Green's cinematography and John Bryan and Wilfred Singleton's art direction and production design. I think it's worth just looking at a few stills, to see how carefully crafted every shot is. Here's Magwitch on the boat back to the prison ship: 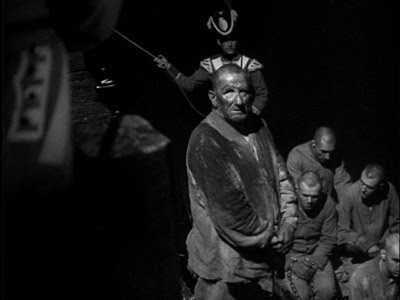 I looked at this in Photoshop; that's true black in the corners, and that sharp diagonal composition must have required a lot of planning to get right. Note how noirish and sleek that shot is, and compare it to the overstuffed, Gothic horrors of this one: 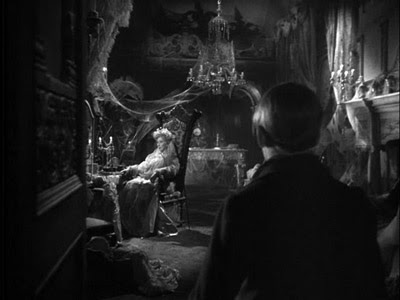 This is Pip entering Miss Havisham's room for the first time. The door that you see on the left opens on this scene. In the commentary for The Silence of the Lambs Jonathan Demme says that there's nothing scarier in the world than a tracking shot down a hall to a closed door (you can see one of these shots in Jame Gumb's basement). This is that shot's ancestor, and it's incredibly creepy. Notice how much stuff is in this room, and still how carefully it's framed so that the curve in the spiderwebs from the chandelier is mirrored by the archway to its right. Here's another door shot: This is Jaggers arriving at Joe's forge for the first time. You see Pip and Joe working on the forge in silhouette, and then the door opens and Jaggers steps in. It's a facile visual metaphor (he's going to come between them!) but it's a quick shot and you don't notice that. The one other thing it accomplishes is it holds off on revealing Pip. Five years have passed since the last time the audience has seen him in the movie; up to this point he's been played by Anthony Wager, who was 14 when the movie came out. From here on, he'll be played by John Mills, who was 38. So having Pip in silhouette prepares the audience for his drastic change in appearance. 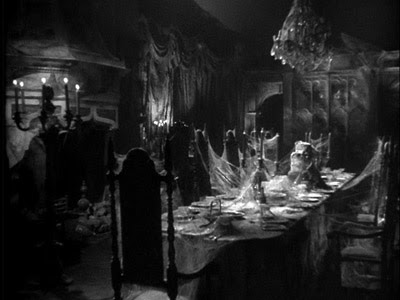 Miss Havisham's dining room. That's five pages of description from Dickens, mapped out to a few seconds of screen time. You can see in this shot how much Sunset Blvd. drew from the production design. One picky thing: the wedding cake on the table is an anachronism; tiered cakes were a later nineteenth century innovation. But still: wow. And then there's this: 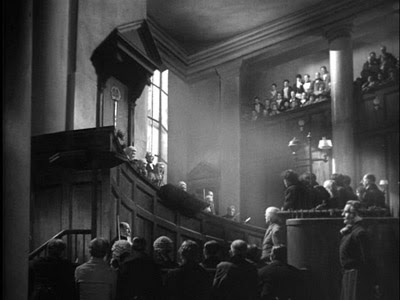 The court where Magwitch is sentenced to death. As in the earlier shot of Magwitch on the boat, note the strong diagonal composition. But also notice how detached this shot is; the attention is on Magwitch, who is sitting at the far left of the bar, not visible. It's almost like a diorama. Compare it to the establishing shot of the courtroom from M: 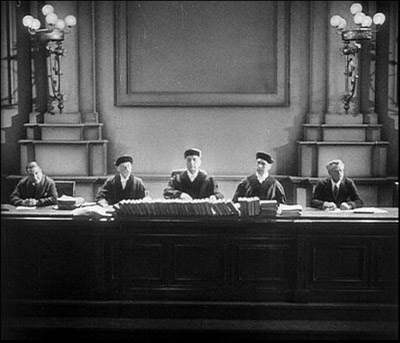 That's a little more direct, no? I could go on about the diagonal compositions pulling the eye away vs. the head-on grid of the bench and columns in M, but that would be misleading; Great Expectations does have some moments that directly confront the viewer, usually to heighten fear. Here's a shot of Magwitch from the initial scene at the graveyard: 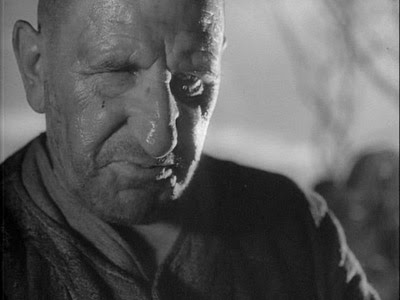 That's about as direct as it gets. Lean is pretty smart about when to shoot a scene close and when to be at a distance. One thing I've learned from this movie is how the same kind of careful composition can give your actors room to play a scene, especially for humor. Here's Pip, Joe, and Mrs. Gargery at the dinner table, very early in the movie: 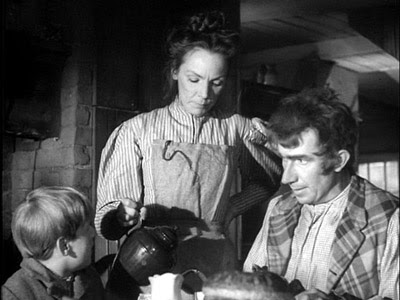 This scene is basically a static shot in which Joe tries to communicate with Pip without Mrs. Gargery knowing. By putting them all in the same frame and just leaving the camera rolling, the actors get to play it to the hilt; you always know where Mrs. G. is looking, and it's one of the funniest parts of the movie. Increasingly I think good direction and editing depends on knowing when to trust your actors to carry a scene; all the humor in this would be lost if it were edited. 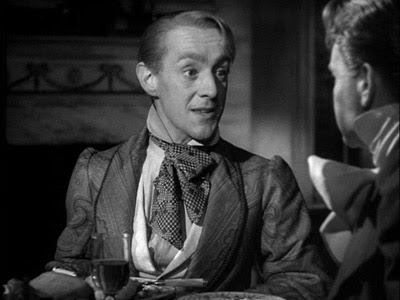 That's all for this one. I read the novel before watching the movie; the next movie in the series is Oliver Twist, directed by Lean two years after Great Expectations; I'll be watching the movie before reading the novel, which I think will make it easier to judge the film on its own merits. That means I'll probably be talking less about the adaptation process, but I can't promise there won't be a lot of stills.

1My roommate Eric informs me that interaction between non-diagetic music and characters onscreen is called "Mickey Mousing" the soundtrack, from those scenes in Disney cartoons when the sound of Mickey walking up the stairs is picked up by notes going up a scale.