In American horror films, one of the obligatory shots for building tension is a tracking shot down a hallway to an unopened door. Jonathan Demme talks about it in the commentary to The Silence of the Lambs, and there's a version of it in just about any slasher or horror film you can name. For Japanese horror, there's an equivalent shot: a slow track in on a woman, seen from behind, with long black hair obscuring her face.

Both shots work on the same principle: vital information is withheld, while the tracking in tells us that the information we're not getting is really important, and undoubtedly horrifying. The fact that the Japanese version features a woman instead of the American hallway probably says something about Japanese attitudes toward women and American attitudes toward hallways (or American sublimation of attitudes toward women, &c.), but it's not a line of thought I'm interested in pursuing much further. I'm just too terrified by hallways. The point is, that's an iconic Japanese horror shot, and it's iconic because it works. Ringu marked its apotheoisis: 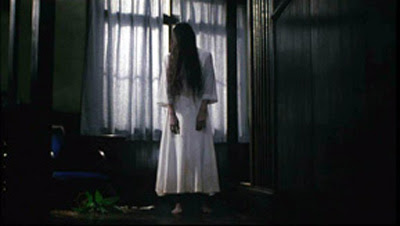 You can track in on Sadako Yamamura all you want, you're never going to see anything but more hair. Kwaidan fits squarely into the tradition of Japanese horror: its emphasis on the weird more than the disgusting, the importance of the unseen, and, of course, the idea that the dead rarely rest easy. It's an anthology film, based on the work of Lafcadio Hearn, one of the first Westerners to collect Japanese folklore. Kwaidan presents four separate stories. The first, appropriately enough, is titled "The Black Hair."

It's the story of a callous samurai who leaves his wife for the daughter of an aristocrat who can give him more money and a better social position. Of course, dating an aristocrat means putting up with ohaguro and hikimaru, neither of which was exactly fashion's finest hour:

Not too surprisingly, the samurai starts pining for his old, non-aristocrat wife, with white teeth and normal eyebrows. But a word to the wise: if you've done someone wrong and decide to make amends, and when you return to your old home, you find her just as you left her, apparently glad to see you—despite the weeds that have grown up through the floor and the caved-in roof—you should probably not sleep with her, no matter how nostalgic you both feel. You're setting yourself up for the worst coyote morning ever.

That's a pretty traditional ghost story, but it's made creepier by a wildly non-traditional score by Tôru Takemitsu. The climactic scene plays with hardly any music, only the sounds of boards and bundles of sticks being snapped in half. There should be diagetic noises of boards breaking; the samurai throws himself through a door and the floor caves in beneath him, but that happens silently. Playing the "things are so wrong and supernatural that the audio track has become unglued from reality" card is a risky move, but Kobayashi and Takemitsu make it work here, mostly because the soundtrack is creepy and startling in its own right. The Carol-Reed-style camera angles don't hurt, either.

She's a yuki-onna, an ice ghost, who freezes men to death and bleeds them dry. The sexual politics are left as an exercise for the reader, but the cinematic ways Kobayashi makes her eerie and inhuman are worth studying. The main trick is lighting:

You can see how carefully the light on her white kimono is aimed to keep her face icy blue. Also note the strange way Kishi is carrying herself; there's a shot later that uses Cocteau's technique of putting an actor on a dolly so they seem to glide along without walking. I originally believed that was being done in this sequence, but it isn't; Keiko Kishi just walks that way. This is also the most expressionistic of the stories, with completely unreal outdoor sets that heighten the sense of weirdness. For no apparent reason, there are eyes in the sky:

That kind of painterly, surrealistic set is more associated with theater than film (probably because it's built around a backdrop), and I have to confess, I love it. That's winter: eyes staring balefully at you from the sky (that's why I moved to Los Angeles). But summer doesn't look much more inviting:

Expressionism serves the second story well, but it doesn't rise to the same level of horror as "The Black Hair," simply because it doesn't have the same queasy undertones of guilt and repression. The protagonist is more or less blameless: a good-looking innocent who grows up to be a loving father and husband. If "The Woman of the Snow" has a message, it's that there are considerably stranger things going on beneath the surface of most other people than you might imagine. Which is true, but a lot more comfortable to think about than regret and betrayal.

The third story, "Hoichi the Earless," despite having the most arresting visual image, is probably the least frightening, unless you're terrified by biwa music. It opens with a recreation of the battle of Dan-no-ura that looks like a producer's nightmare.

I would have loved to be at the meeting between Kobayashi and the Toho execs where he explained that he needed to stage a 12th century naval battle, with period ships and costumes, and he needed to do it indoors. I suppose this was always seen as a prestige project, rather than the kind of exploitation we associate with horror films in the states, but still, this must have been expensive.

Which is not to say that Kobayashi didn't do it as cheaply as possible; many of the tricks in Roger Corman's playbook are on display here. You'll notice lots of medium shots and no wide shots, which means the same extras can be used more than once. In place of wide shots, Kobayashi uses the educational film trick of panning over a historical painting of the battle, which is surprisingly effective, since part of the point of the sequence is that it happened a very long time ago. I wouldn't recommend this technique if you're trying to shoot a space battle, however.

You can see that the skies are not as expressionistic as the ones in "The Woman of the Snow," but rest assured, the shots of the Emperor's attendants throwing themselves into the blood-stained sea are just as striking.

The Battle of Dan-no-ura is just prologue, however, and I must regretfully inform readers that the main story of "Hoichi the Earless" involves a great deal of biwa music. This is certainly apt: the story is about a blind biwa player who becomes renowned for his version of "The Tale of the Heike," an epic poem that was traditionally sung. Word of his version reaches the underworld, and the principles of the original battle arrange a command performance (they probably think the song is about them). So, yeah, there's diagetic and non-diagetic biwa a-plenty in this chapter, and I just don't have an ear for traditional Japanese music. The visuals nearly make up for it, however, especially at the end. Hoichi can only escape the ghosts who want him to perform for them by having prayers written on his body.

There's a semiotics thesis just waiting to be written there, if it hasn't been already.

The final story, "In A Cup of Tea," was a very odd choice for inclusion in the film. The Lafcadio Hearn version is kind of a trick story about narrative expectations, and not exactly screaming out for a film adaptaton. Hearn presents a story that—he informs us before he begins—was left unfinished. Despite the warning, anyone reading will get caught up in the story-within-the-story, about a samurai who starts seeing a ghostly reflection whenever he sees water.

All the elements of a great ghost story are there except the ending, which Hearn chides the reader Nabokov-style for expecting:

I am able to imagine several possible endings, but none of them would satisfy an Occidental imagination.

It's a nice little bit of metafiction, and it works pretty well on film, but Kobayashi, maybe sensing that this finale would be something of a letdown for an audience that had been watching Kwaidan for the previous three hours, makes a critical change to Hearn's structure that I don't think works. He doesn't do the worst thing: he doesn't resolve the story-within-a-story any more than Hearn does. But he does attempt to link that story and its framing device, in a way that plays like a traditional ending. I can understand the impulse, but if he wanted to have a satisfying narrative conclusion to his anthology (the sort of conclusion that Hearn derides as being typical of the "Occidental imagination"), then maybe "In A Cup of Tea" wasn't the best story to end with. It seems perverse to tack a sort of metafictional resolution onto a story that is very deliberately about (and against) the desire for narrative resolution. Of course, if you haven't read the story, all you'll notice is an ending that's a little too clever for its own good.

So how does the whole thing play, in all it's sprawling glory? Not badly at all, although the stories seem to be arranged in order of diminishing emotional affect. Anthology films can be hard to judge in their entirety: does the creepiness of "The Black Hair," or "The Woman of the Snow" make up for the slow pace of "Hoichi the Earless?" Clearly, "In a Cup of Tea" is an attempt to tie the whole enterprise together by making the movie about storytelling itself. That's all to the good, except that "In a Cup of Tea" doesn't quite have the courage of its own convictions. We're left with two excellent ghost stories, one average one, and one that doesn't quite work. Two out of four ain't bad.