The showbiz movie has two basic archetypes, positive and negative. In the positive version, an innocent gets discovered and rises to the top: the conflict comes when they have to choose between violating some core principle and taking some kind of short-term gain—Singin' In The Rain is probably the best example. The flip side of the mirror are the movies where a ruthless protagonist slimes his or her way to the top; think of All About Eve or The Player. But while the positive and negative archetypes may portray show business at different levels of toxicity, there's never any question of its seductive power. Half the appeal for the viewer (especially in the negative showbiz movies) is the chance to vicariously experience the power and the glory of the entertainment industry. What makes Variety Lights so charming is its version of power and glory. Here's Checco Del Monte as we first see him, embodying all the irresistable glamour of third-rate post-war Italian vaudeville: 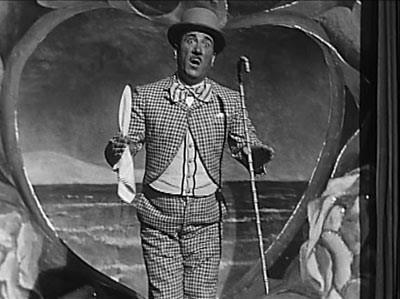 He's not exactly Joel Grey in Cabaret. Checco is played by Peppino De Filippo, and that's as dignified as his character gets. He's the capocomico of a troupe whose appeal is becoming more selective. It's hard to imagine why; not only do they have Checco's singing, they have Giulio Cali's fantastic magic act: 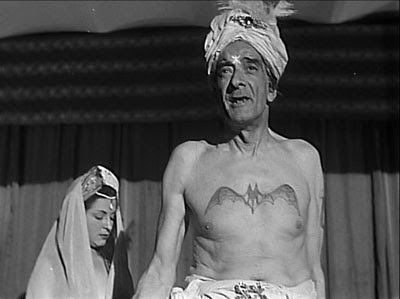 His big trick is eating a lightbulb. 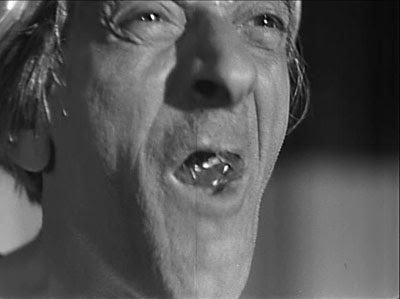 And if that's not enough to seal the deal, there's the act that gets the largest print in the posters... TUTTI A BIKINI! 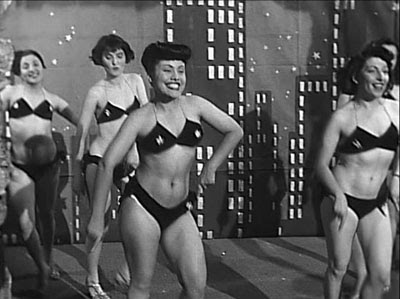 It's as glamorous as the "Dignity... always dignity!" flashback in Singin' In The Rain. But while Don Lockwood and Cosmo Brown both go on to bigger things, for Checco and the rest of his troupe, the performance that opens the film is their finest hour. Fortunately, they reach at least one member of the audience, Carla Del Poggio's Lily Antonelli, who applauds the show's cheesy finale like it's Jesus coming back from the dead. 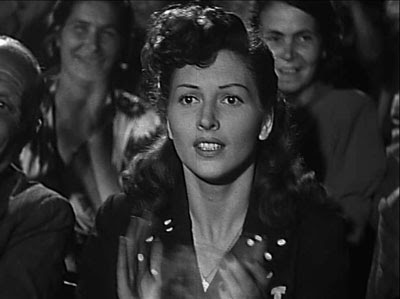 Lily tracks Checco and his company down on the train to their next show and explains that she is eminently qualified to perform with them: she was the winner of a local dance marathon ("I had to stop because the others did, but I wasn't tired at all"), she was elected Beach Queen, and a local paper said she had "legs like Maresca."1 Sterling qualifications, to be sure, and Checco is suitably indifferent, even when she hands him a stack of glamour shots and shows him her legs in person. She finally makes an impression when she rents a cart for the whole (flat broke) company and saves them several miles of walking. This gesture convinces Checco to give her her big break. She takes full advantage, first upstaging the prima donna: 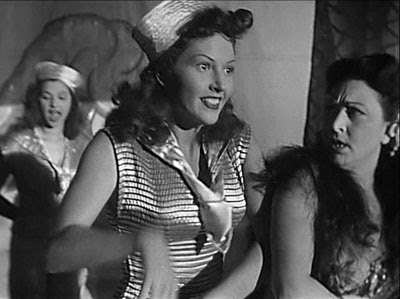 Then winning the hearts and groins of her audience with a convenient (but accidental) wardrobe malfunction: 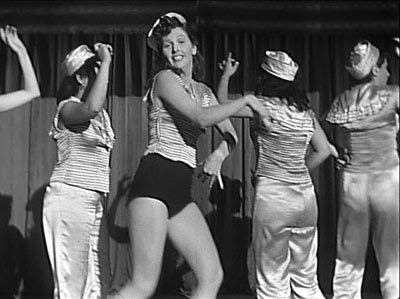 Needless to say, Checco knows talent when he sees it, and Lily quickly becomes the company's star attraction. This doesn't go over well with the rest of the act, but it especially doesn't go over well with Checco's sort-of-fiancée, Melina Amour. She's played by Fellini's wife Giulietta Masina, and if you remember Nights of Cabiria you know that no one plays long-suffering like Giulietta. 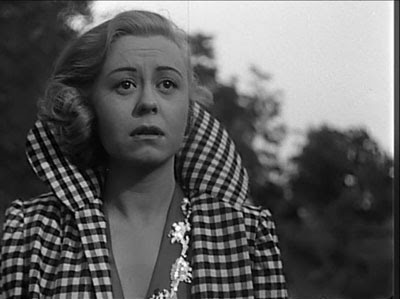 Of course, it's apparent that Checco's world—where success means staying on for a repeat performance of "TUTTI A BIKINI!" for an audience of farmhands—won't satisfy Lily for long. You can actually see the moment when she decides he won't be able to get her where she wants. He's taking her around Rome, trying to put a new production together, and booking agents are roundly ignoring him. He plays things cool, but she looks around appraisingly at the other agents: 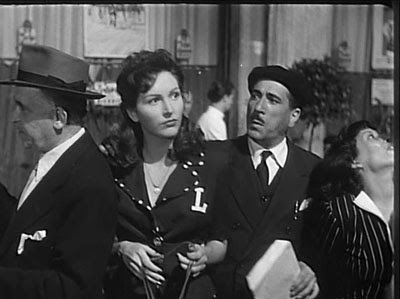 It's a beautiful moment. Although Lily does turn into something of a monster over the course of the film, this is an altogether gentler film than All About Eve, and even at her worst, there's something charming about her. Checco's a rube, but he's still seen a lot more of the world than she has. She knows enough about the best of everything to order lobster and champagne when Checco takes her out: 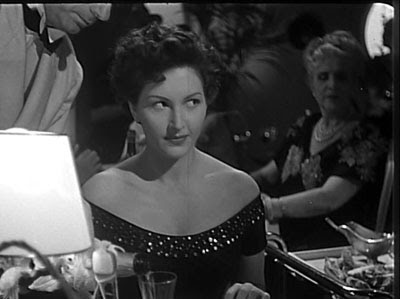 But after one sip, she says, surprised, "It tastes just like soda!" and orders a beer instead. In short, Checco should know better, but Lily clearly doesn't. And so the film doesn't fit the mold of the negative showbiz movie: it isn't about Lily's megalomania, but about Checco making a fool of himself. Let's be clear: this is not a man with a lot of dignity to spare: 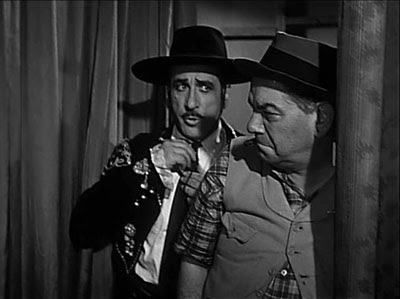 But he does have the one thing you can't afford in the entertainment industry: sentimentality. Although he treats Melina Amour terribly, he unfortunately seems to see Lily as something more than a means to an end. Watching the gap widen between Checco's version of Lily and the genuine article will be a familiar experience for anyone who's had a good friend go off the deep end for the wrong person. And when you're emotionally invested in someone who's using you, you can always fall lower. 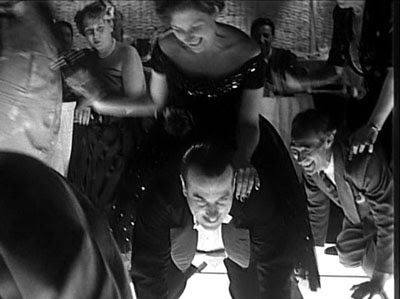 I'm making this sound like an unpleasant film about unpleasant people, and that isn't the case at all; whatever happens, it's clear that the filmmakers have tremendous affection for all the main characters. So they all get a happy ending, at least from their own perspectives, even Lily. She achieves the success she's always wanted; when we last see her, she's dripping with fur: 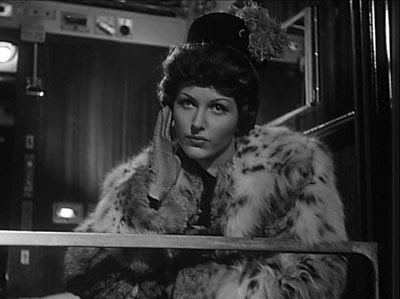 Which is considerably more than she wears onstage. 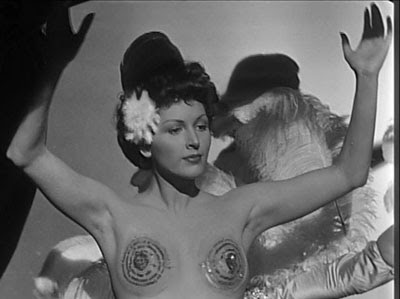 And Melina may have lost her savings, but she's doesn't seem to be too unhappy about it. 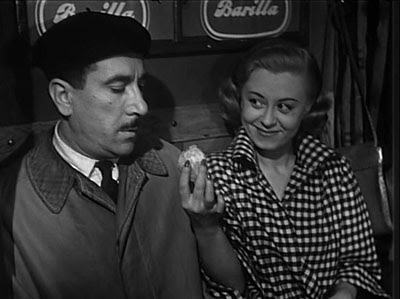 Neither is Checco, for that matter. He's put his old troupe together for a grand tour: they're playing Bisceglie2, Molfetta, and posssibly even Trani. He's also still letting Melina take care of him, but at the film's end, we see him flirting with another would-be actress. This is where the Fellini and Lattuada stumble: like Melina, they forgive Checco too much. He's squandered Melina's libretto postale and dashed her dreams of running a salumeria. While it's credible that Melina would have him back (it's clear she can't deny him anything), and he's clearly incorrigibly foolish, it's asking a lot from your audience to try to wring a lighthearted tone from his disastrous moral failures. It's a testament to the filmmakers that they almost pull off this ending, but ultimately I wasn't quite sentimental enough about Checco. It's probably churlish to play the sentimental card, given that we're talking about Italy circa 1950; it wasn't exactly a mecca for cold-eyed rationalists. You can read Luigi Barzini's The Italians, for a book-length exegisis of what I'm talking about,3 or you could just observe that in Variety Lights, an audience is brought to tears and a standing ovation by Melina Amour's singularly unconvincing impression of Garibaldi: 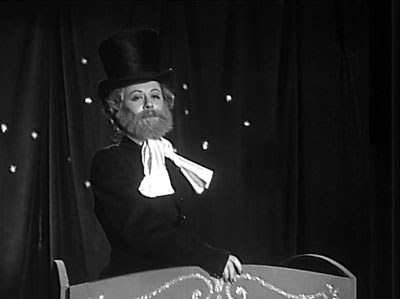 So the film's treatment of Checco is a product of its time and place. Sometimes the filmmakers seem to be aware of this, and sometimes they aren't. It's not a keenly observed character study, and it's not Nights of Cabiria. But Variety Lights mostly gets by on likeability and low-rent charm. A lot like Checco. Or Italy. 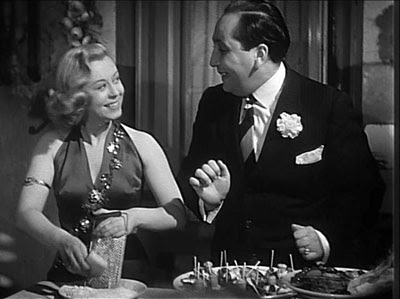 There's a great shot of the meal that has no conversation, just the sound of lots of people noisily chewing. Of course, the evening ends with Checco throwing a fit and getting everyone thrown out without a decent night's sleep. But that seems a fair trade-off for the food. 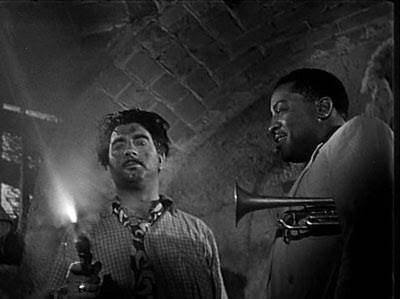 Coincidentally, a magical Mexican sharpshooter is the one thing that could have saved The Legend of Bagger Vance.


1Probably this was a reference to Lidia Martora Maresca, an actress who seems to have been Peppino De Filippo's lover. Anyone know for sure?

2Not "Bisceglia," as the subtitle has it, but this place. Note that all three stops of Checco's tour are on a ten-mile stretch of railroad track.

3Particularly his chapter on family life—he calls Italy a "crypto-matriarchy," which is still apt.

Posted by Matthew Dessem at 3:05 AM 7 comments: