Blood For Dracula, 1974, written and directed by Paul Morrissey, characters created by Bram Stoker. You may remember Bob Dole extolling the virtues of True Lies during the 1996 presidential campaign, and the press's reaction. If he'd mentioned Blood For Dracula instead, nobody could have criticized him. I think the moral here is clear: if you want to be President, you'd better put in some time with X-rated Andy Warhol productions. Seriously: although I doubt James Dobson has seen it, or would care to, Paul Morrissey's version of the Dracula story is moralistic, harshly conservative, anti-communist, and anti-modern. And I loved every second of it.

Morrisey's main variation on the traditional Dracula story is that his Dracula can only drink the blood of virgins. As the movie opens in the 1920s, Romania has run out of virgins; at his servant's suggestion, they travel to Italy, where they believe that the Catholic church will have insured the purity of unmarried women. They're taken in by a family of down-on-their-luck aristocrats with four marriageable daughters; but as Dracula discovers, aristocratic women sometimes have a weakness for hired hands, especially if their hired hand is a socialist, looks like Joe Dallesandro, and chops wood shirtless.

Morrisey plays the conflict between Dallesandro's servant and Dracula as a conflict between socialism at its most brutish and the courtesies of an older, more refined age: it's the horror movie as dialectic. Although both characters want to exploit the Di Fiore daughters, it's clear that the director's sympathies lie with the dying class structure that Dracula represents. In part, this is due to the inherent attractiveness of evil; it doesn't hurt that Morrisey has Udo Kier as the Count. He has the features of a silent film star (and has been stunt-cast in vampire movies ever since, e.g., The Shadow of the Vampire and Blade). Here's Kier in the opening shot, a beautiful extended take of him applying his own makeup: 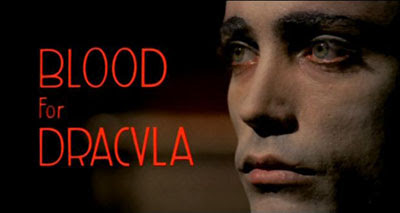 Now that's what I call aristocracy!

In the end, Dracula's refinement and, well, class are undone by modern permissiveness; the Di Fiore daughters (at least, two of the four) are no good to him because they've been allowed to indulge themselves. You can't really blame Dallesandro, though; the infinitely corrupt daughters in question are played by Dominique Darel and Stefania Casini, both of whom have much to offer a red-blooded socialist: 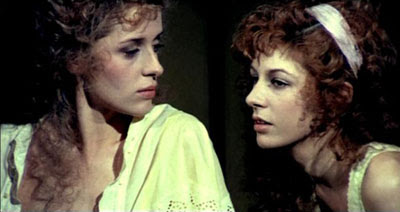 So Dallesandro is tempted (though it doesn't take much to tempt him), Dracula's tempted. Dallesandro gets what he wants and more from the daughters; you'd have to call their relationships antagonistic, but he seems satisfied. Dracula doesn't react so well to his encounters with the two middle daughters. He reels around like a drunkard and projectile vomits back their blood. It's campy, and funny, and gross. 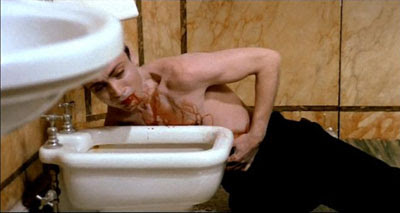 Now that's what I call vomiting!

These "sick Dracula" scenes go on far too long to be anything but funny, and that's something I should note: for all its moralistic fervor, the movie is pretty campy. I don't think we're meant to take Morrisey's ironic detachment from vampire stories, or horror movies, as ironic detachment from his distaste for modernity, however; the movie does too good a job of making Dracula a romantic figure, and way too good a job of making Joe Dallesandro's servant an awful guy. Example: talking about the youngest daughter, who is 14, "I'd like to rape the hell out of her." Later, he does, purportedly to save her from Dracula (cause if she's not a virgin, she's no good to him). 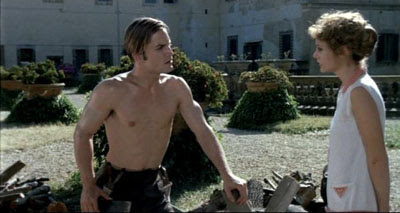 Joe Dallesandro and Silvia Dionisio as Mario and Perla

Morrisey also uses the lighting and sound to make Dracula seem more romantic than he otherwise might. As I mentioned earlier, Udo Kier looks like a silent movie star, and Morrisey lights him like one, too: straight on light. He gives everyone the same treatment—his is one of those movies in which everyone looks like a movie star—but he does an especially nice job with Kier. And Claudio Gizzi's excellent score, which is very romantic (as in the period) adds a tragic dimension that keeps the picture from going headlong into camp. I can't say enough good things about the score, actually; the Criterion disc has a stills gallery with a stereo mix of excerpts from it that I listened to again and again. All in all, well worth the time it takes to track this one down and see it.

That's all for this one; I leave you with Arno Juering as Anton, Dracula's servant, and possibly the creepiest guy ever: 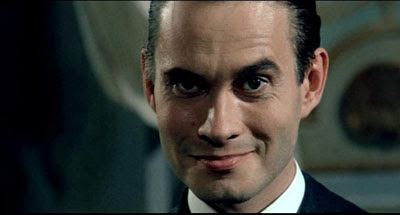 Arno Juering, looking honest and upstanding. I really wish I could do that thing with my eyebrows.

The Morrissey films raise an interesting question. If, as he and esteemed film critic Maurice Yacowar proclaim, these films are about how society's licentiousness have led to corrupt morals, etc., then how annoyed are they that these films are generally enjoyed as pure horror-comedy spectacles? (Or do they think their message is breaking through into peoples' heads anyway?) Ideologically I find their agendas clumsy and kind of dumb, yet the movies are fun in a way that either transcends the filmmakers' intentions or skirts around them.

I do remember that Morrissey was completely deadpan on the commentary track; the idea that someone would find the movie funny didn't seem to have occurred to him. Which seems particularly strange in the case of "Flesh For Frankenstein," because I can't imagine anything more distracting than shooting in 3-D.

It's reassuring to read your spot-on review/analysis. This film is too often misunderstood; a reflection (I think) of people's preconceptions.

Weirdo! The story sounds interesting, particularly the whole concept of virgin blood. I am a big fan of the original novel Dracula, but have never liked any version of the movie. This one sounds a much better thing than the normal Dracula movie though!

I don't know how to approach Flesh for Frankenstein or Blood for Dracula as anything other than camp. But I don't always understand or recognize camp. A film can be either inadvertently (Valley of the Dolls) or deliberately (anything Charles Busch) camp. Which are these? On the one hand there seems to be a seriousness of purpose in the art direction, score and cinematography. On the other hand the content and performances seem intentionally over the top. Or are they just really bad? I'm not sure. And because I'm not sure, I don't know how to respond. Furthermore, at what point does a film morph from bad to camp?

Then there are those commentary tracks by Paul Morrissey and Maurice Yarcowar. There is such high-mindedness in the analysis of these films that the commentaries themselves approach inadvertent (what Susan Sontag calls in her "Notes On Camp" naive or pure) camp. Sontag says that "in naive, or pure, Camp, the essential element is seriousness, a seriousness that fails." I found myself laughing several times at the pretentiousness of these commentaries.

I think that aspiring to be camp somehow misses the boat. Camp at its best is an appreciation after the fact. And that may be the key right there. Perhaps in the end I'm thinking too much. Perhaps camp is too nebulous to be successfully analyzed. Perhaps camp should merely be enjoyed.

I'm late to the party, but in an interview in Fangoria, Paul Morrissey took exception to Flesh for Frankenstein and Blood for Dracula being labelled as "camp". He claimed that camp means that something intended to be serious instead plays as funny, whereas he says that his Frankenstein & Dracula were intended to be funny, and are therefore comedy.