This movie is fucking great. Or to put it another way, s'fucking great, innit. Bob Hoskins plays Harold Shand, a London crime boss on the make. Harold has money, friends in high places, money, a high-class girlfriend, and money. He's basically a yob, and so are his friends, but when the movie opens he's about to go legit. With some American mob money, he's going to buy up the decaying Thames waterfront and develop it into the heart of a new London, just in time for them to host the 1988 Olympics (we all know how that turned out). The American mobster comes to London to scope out his investment and, over the course of an Easter weekend, Harold's empire falls apart.

Or, more accurately, is blown apart. His Rolls Royce explodes outside a church, his closest friend is stabbed to death, the pub where he's set up an elaborate dinner for the Americans is bombed; it's not a relaxing weekend. To make things worse, Harold doesn't have any idea who's doing this to him, or why. So he has to play the gracious, responsible, in control host to the American while simultaneously throwing everything he's got against whoever's trying to kill him.

This is Bob Hoskins's movie all the way. He plays Harold as a writhing mess of ambition and desire; it's a really incredible performance. Most of the acting is good, with one exception: the American mobster is played by Eddie Constantine, from Alphaville, and he's no fun to watch. I appreciate stunt casting him, and his ruined face is perfect for the character. But his version of an American accent is painful to listen to. Just one example: he pronounces Vietnam with two syllables.

Everyone else is either good or great, though, and the script is so good that one off note wouldn't matter. I don't think this is as good a gangster movie as Sexy Beast (which for me is the gold standard), but it gives it a run for its money. And it has one scene that's iconic; Harold addressing a group of mobsters who he thinks may know who's out to kill him. What makes him a great leader is his ability to put other people at ease, to let them make themselves at home even in an awkward situation. Like so: 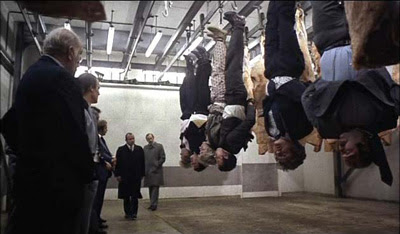 Guy Ritchie, eat your heart out.

HAROLD
The Yanks love snobbery. They
really feel they've arrived in
England if the upper classes
treat them like shit.

VICTORIA
It gives them a sense of history. 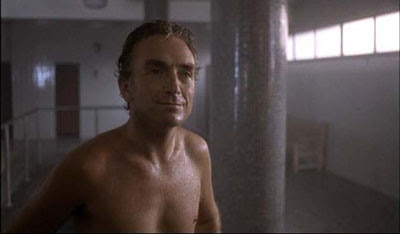 And here's the young killer: 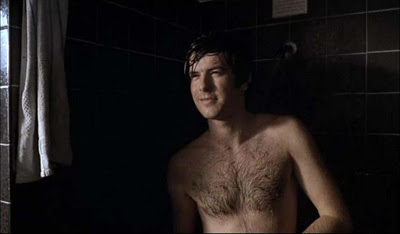 That's right: in this movie James Bond nearly makes out in the shower with Belloq, then stabs him to death. I felt like I'd wandered into some sort of terrible fan fiction. The worst thing is, there's nothing a filmmaker can do to prevent this; when you cast a minor role, you just have to hope for the best. 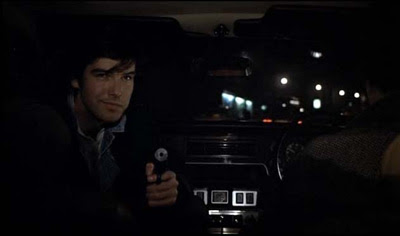 Posted by Matthew Dessem at 9:01 PM

You've caught the mood and energy of this film! We definitely need a comment on Helen Mirren's portrayal of a tender but strong Victoria and what Victoria's tough-love attitude toward Harold reveals about him as a person, apart from his gangster outer shell. The scene where she hauls off and slaps him, the why of it and his reaction to it and to her and to her counsel throughout the film have to be mentioned to give us the full character of Harold as the director and writer conceived him.

I'm looking forward to your reviews of Criterion's "The Night Porter," "The Leopard," and "White Nights."

Mirren's performance, and her relationship with Harold, is definitely critical to the film as a whole—I was just so overwhelmed with the pop-cultural weirdness of James Bond picking up Belloq that I left it out entirely. It's been more than a year since I saw the film, however, so I'm going to have to beg your pardon rather than adding anything about it—but if you'd like to comment on it, feel free to do so in the comments section.

The Night Porter is next, actually, I'm watching it tonight. When you mentioned White Nights, I thought you meant the Taylor Hackford one (Helen Mirren on the brain, I guess). "Say You, Say Me," "Separate Lives," and the heyday of adult contemporary soundtracks. Shudder...

Visually The Long Good Friday isn’t a very interesting film, although it does have a taut script and effective score. It is Bob Hoskins’ tour de force performance that undeniably elevates this film to a must-see. As you've noted in your most recent essay, film is a multidisciplinary medium. But some parts are more equal than others. I don’t think a superlative film score is going to elevate an otherwise mainstream film to greatness. But an outstanding performance can do just that.

This is a gangster film, a mystery, as well as a character study, but I think what The Long Good Friday does best is the last, i.e. explore the character of crime boss Harold Shand. Hoskins gives a carefully modulated performance. He engages the audience early on with a wise display of Harold’s most endearing qualities: his sense of humor, his charm, his devotion to family and mistress, and his grief over the loss of a best friend. The depth of Shand’s anger, sociopathic brutality and hubris are not fully revealed until the second half of the film, but by then we are firmly in Shand’s corner.

I wasn’t bothered by Pierce Brosnan’s appearance here as First Irishman. I even thought it was beneficial. When he turns around to point his gun at Shand in the final scene, I think that Brosnan’s familiar face drives home with an immediate, forceful impact that this is the end of the road for Shand. If this had been an unknown character actor that you may or may not have remembered seeing early in the film, this reveal might not have had the same punch.

Of course, Brosnan was an unknown character actor when The Long Good Friday was released. Also, I love the phrase "devotion to his family and mistress" and may use it on my tombstone.

I realize Brosnan was unknown when this was originally released. You suggested that his subsequent fame is detrimental to the film. I had a different take. "Devotion to his family and mistress"...lol, that slipped by me. It should have read "mother and mistress" but it's yours to use as an epitaph if you'd like.

"Not interesting visually!!!" That's because there's no cgi in there.......This film has great sets and scenery! One of the best for the budget. Fantastic drama with superb dialogue & characters.