After trying to avoid ruining Diabolique for anyone, it's nice to write about something without a twist ending. You could make a case that Wages of Fear is an insightful critique of globalization, particularly relevant during our occupation of Iraq. And you'd be right, but you'd be boring. Mostly, it's a thriller, with as simple a setup as Speed: get two trucks loaded with nitroglycerin from point A to point B without blowing it up. It's a bit like those Grand Theft Auto levels where you're transporting explosives, except non-interactive.

All right, it's a little more complicated than that. The movie's set in a dead-end town in South America. Like in Casablanca, the town is filled with Europeans in exile; they all want to leave, but no one has enough money. It's an oil town, and as one character remarks, where there's oil, there's Americans. In this case they're workers for the Southern Oil Company (no relation to the Standard Oil Company expressed or implied, I'm sure). In classic American style, the oil company employees have integrated themselves with the local community, established a trust-based relationship with the natives, and are pumping money into the economy. No, I kid, I kid. They actually ride around the town on motorcycles, talk to no one, protect themselves and their oil pipeline with armed guards, and live in a secure area (let's call it a "Green Zone"). They do hire natives, for the lowest paying and most risky jobs. Shortly after the movie begins, four locals are killed and nine injured in an oil rig fire; in a public relations masterstroke, the Americans don't tell anyone who's been hurt (they don't seem to know any of their names), and so the truck carrying the sick and the dead is stormed by locals desperate to know if their family members have been killed. 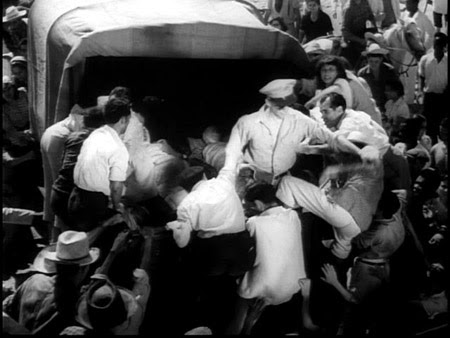 Americans get to know the locals. Note the friendly uniform and sunglasses of the Southern Oil Company, and the unfortunate mummy in the back of the truck (he doesn't make it).

All that stuff is background, though, and it makes the movie sound much more political than it is. The point is to get the oil well burning and establish that the Southern Oil Company doesn't much care if its workers live or die (that goes for Americans, too: one American gets killed in the oil fire; he is given "the boss's regards" over the phone and the company hangs up on his mother to keep their phone lines free). So with those facts as givens, here it is as a story problem:

You can probably guess the solution Southern Oil comes up with. They offer $2000 (about $14,000 today) to any driver who can get a truck filled with nitroglycerin to the fire. They end up hiring four drivers: two Frenchmen, an Italian, and a German. The people who don't get a chance to drive a truck filled with explosives through the mountains aren't happy about it; that's how desperate these people are to get out of town. One of the rejected drivers kills himself; another, it is strongly suggested, kills the German in order to take his place. They're suited up in brand new Southern Oil Company uniforms, paired up, and sent on their way in the dead of night. 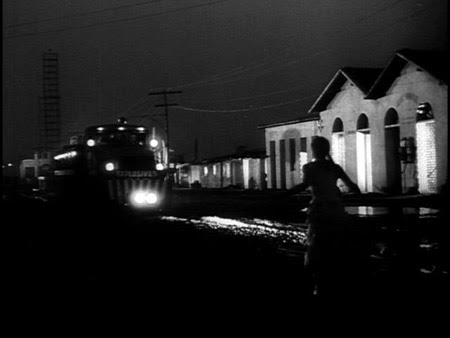 One of the two trucks making its way through town, siren blaring, at three in the morning. Note the subtle and reassuring warning label on the front.

What follows is sort of like the most horrible driver's-ed class imaginable. If either truck hits so much as a pothole, the nitroglycerin will explode. Clouzot sets up a series of increasingly sadistic obstacles for the four men, and the resulting scenes are incredibly tense and exciting. A few examples: 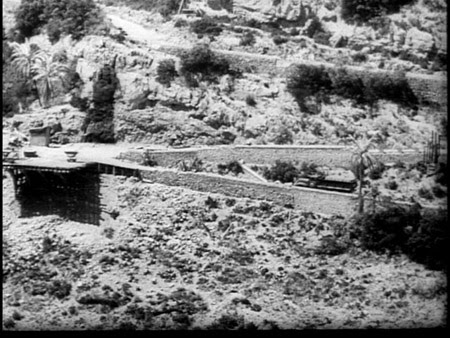 Note the S turn, too tight for a truck to make. 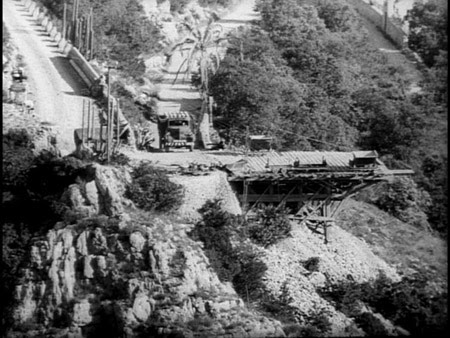 But fortunately, there's a wooden ramp to use to turn around. 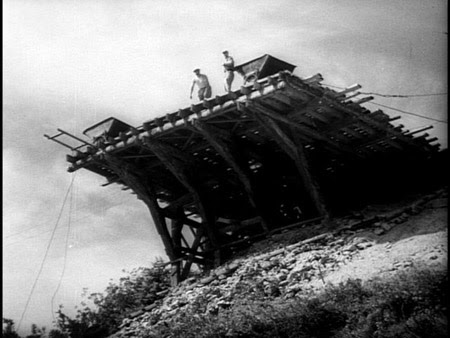 Which, as you can see, is sturdily built.

So the truck has to pull forward, then back onto the ramp to make the turn. But the truck is heavy and the wood is rotten, and backing up a truck isn't easy to begin with. What follows is one of the most harrowing scenes ever filmed. I'll give away a secret; they make it. They knock a big hole in the platform with a tire, end up covering the whole thing with slick mud, and nearly go over the edge while backing up, but they make it. Of course, that's the first truck. The second one has a worse time of it. Doing this sequence essentially twice in a row is a ballsy move, but Clouzot pulls it off; it's more exciting the second time around.

These are set pieces that wouldn't be out of place in a modern action movie (and for the most part, they're handled better here than in modern action movies—the best parts are exciting like Raiders of the Lost Ark is exciting, and I don't make that comparison lightly). On top of that, Clouzot layers a pretty vivid picture of globalization at its worst, and on top of that, there's a sort of pop existentialist portrait of the unknowability of other people (let's just say that "teamwork" is pretty loosely defined by these drivers). It's not Andrei Rublev, but it's more than just entertaining (and it's very entertaining). If you're not yet convinced to see this, I offer one final, irrefutable argument: KABOOM! 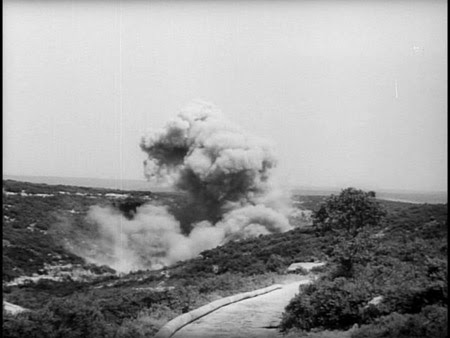 Not everyone makes it.

"Criterion's site says that the new transfer is high-definition, but I'm not sure how that's possible, given that the source material is 1.33:1."

"HD" here simply refers to the number of pixels used when transfering the 35mm print to digital--the more pixels, the more the image on the eventual DVD or BluRay or HD-DVD (etc.) is likely to accurately represent the print. It has nothing to do with aspect ratio.

Right -- I understand this now (I hadn't grasped that they were keeping the HD transfers to be ready to release Bluray or HD-DVD versions). Still, if you have a 1.33:1 SD DVD as a final product, it shouldn't matter much whether it was made from an HD transfer or an SD transfer, should it? Or are you less likely to have artifacts if you work from an higher resolution transfer when compressing the video?

I love this movie and I love your essay. I'm so glad I found your site, I'm working my way thru your reviews the way you're working your way thru the movies (I've seen a lot of these but not all). It's very refreshing to read the reactions of someone really smart who loves movies but isn't a movie critic.

Thanks! Glad you're enjoying this.

Thanks so much for this post - I saw this film on TV aaaages ago, and it has really stayed with me, although I couldn't remember the name of it. Googling "film", "truck" and "explosives" got me to this page! Your review has reminded me what a great film it was. I must get it out on DVD to watch it again.

This movie is scheduled for a Blu-Ray release soon, yo. Am I the only one who doesn't feel the homosexual vibe that most every critic mentions? This movie has a lot in common with The Treasure Of The Sierra Madre and There Will Be Blood. For me, driving the truck through the pool of oil was way more intense and memorable than the wooden ramp sequence. This is a very fun movie AND I LOVE THE COMPARISON TO GRAND THEFT AUTO!!!!!!!!!!!!

Your first impression of Susan Boyle was probably as off the mark as mine. And no matter how much information we’ve acquired since, that first impression of her walking onto the Britain’s Got Talent stage in that viral video clip is indelibly etched in our minds. There’s no question that first impressions, mistaken or not, are powerful things. The opening sequence of shots in a film may not make or break the film, but it is a golden opportunity to establish its central mood and themes and make a good first impression.

A boy dressed in only a tattered shirt taunts several cockroaches bound to each other with string. The boy is distracted by the call of a shave ice vendor whose wares are beyond the boy’s means, and when he turns back he finds he has lost the roaches to a vulture. The camera pans across the ravaged landscape and impoverished citizens of Las Piedras. Another boy playing at the edge of a mud puddle is callously and copiously splashed as crisply dressed Americans in a Southern Oil Company jeep drive headlong through it.

In three swift and striking shots lasting less than 45 seconds Clouzot brilliantly and economically establishes every important theme in The Wages of Fear: the poverty, desperation and yearning of the citizens of Las Piedras; American imperialism; the plunder of natural resources; man’s appetite for cruelty and exploitation.

The first hour of The Wages of Fear is all expository set-up; the last ninety minutes the action-packed pay-off. While it’s true that first and foremost The Wages of Fear is a nail-biting thriller, the exposition intensifies our response to the action. Although I understand the statement that this structure would seem peculiar in a modern film, is there really a better way to tell this story? The ostensible aimlessness of those first sixty minutes mirrors nicely the lives of the characters. And Jo’s flip-flop from tyrant to coward plays as well as it does not just because of Charles Vanel’s masterly performance but also as a direct consequence of the thorough exposition early on.

The Wages of Fear is dazzling from first frame to last. While it is way too early for me to be compiling a list of my ten favorite Criterion films, it is hard to imagine that The Wages of Fear won’t one day make the grade.

Yeah, I absolutely love this movie.

Ohhhh this is a really old thread, but I must say I have thoroughly enjoyed stumbling over you blog, and have bookmarked it. This will provide many "mental" breaks over the winter.

Also - and I know I risked many raspberries for saying so - but the remake of this film, Sorcerer, is possibly my favorite movie. Also desperately suspensful, start to finish.