It's extremely rare for a marketing department or critic to hail a film as the best ever made, or the funniest, or the saddest, or anything else, with one exception: movies are routinely marketed as the most frightening. What's more, there seems to be some consensus about what the most frightening movies were at any particular time; Nosferatu had the title for a long time, as did Psycho. These days, I've heard again and again that Audition is the most frightening film ever (I haven't seen it yet). I think people are able to make this distinction for horror films in a way they can't for comedies or dramas because a good horror film can keep you creeped out for days, in an involuntary and not necessarily pleasant way. This provides a relatively objective measure of how frightening the film was. Anyway, from 1954 to 1960, Diabolique was the undisputed champ.

For a modern viewer it's more of a thriller than a horror film; there's nothing particularly terrifying outside of the last ten minutes or so. But by modern standards of thrillers, it's exceptional. The plot is the star, more than the individual performances or direction or cinematography, so the plot is what I'd like to talk about most. However, the movie has a surprise or two in it, and Clouzot ended it with the following admonishment: "Don't be DEVILS! Don't ruin the interest your friends could take in this film. Don't tell them what you saw." So I'm not going to go into great detail about the second half of the film, which means this will be an incomplete review.

Paul Meurisse plays Michel Delasalle, the principal of a French boarding school with a relatively great life. He's got an attractive wife and an attractive mistress, he makes a comfortable living off his wife's fortune, and he keeps himself amused by bullying people around him. And because he works at a school, he's got plenty of targets. However, his wife and mistress are both less than amused and less than trustworthy. Here's the whole happy family: 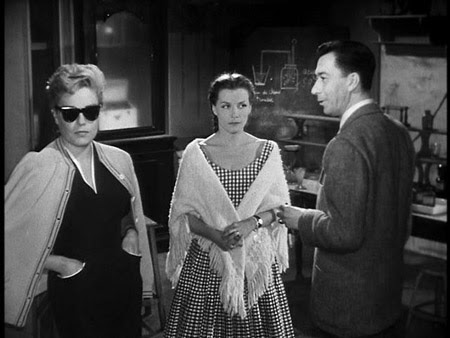 L to R: Simone Signoret plays Nicole Horner, the mistress. She's wearing sunglasses because Michele gave her a black eye. Vera Clouzot (the director's wife) plays Christina Delasalle. And Michele is on the right, amusing himself at the women's expense.

As you might have anticipated from the still above, Nicole and Christina team up to exact a hilarious revenge on Michel. It's kind of like First Wives Club. Below is Michel after falling victim to one of their little pranks. See if you can spot the difference between the two stills: 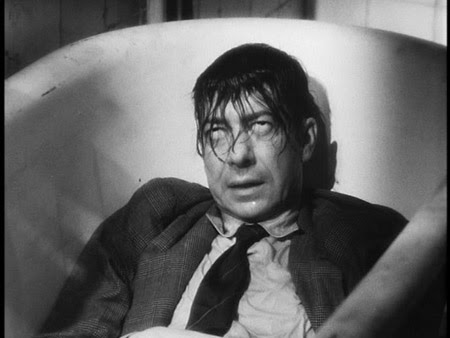 That's right: in the second picture, his suit needs ironing. Also, he's been drowned in a bathtub. Not a pleasant end, but then Clouzot goes to extraordinary lengths to show the audience what a bastard this guy is. He beats his wife (who he affectionately calls "my little ruin"). He beats his mistress. He mistreats his employees. He buys rotten fish for schoolchildren (no, really!). If anybody ever had it coming, it's Michele.

So you're sympathetic to his wife and mistress; you want them to get away with this murder. They have a pretty good plan, too: they drug Michele, drown him in a bathtub while he's passed out, sneak him back into the school grounds and dump him in an unused swimming pool, where he disappears beneath the algae-covered surface. By the time he surfaces, everyone will assume he got drunk and drowned himself.

Except he doesn't surface. Days go by and the body doesn't turn up. Finally, they drain the pool, but the body is gone. As the murderesses begin to turn on each other, someone seems to be having a joke at their expense: Michele's suit is returned from the dry cleaners; someone has rented a room in his name. And that's before the supernatural stuff starts happening. I won't go into the plot in more detail here, but suffice it to say you'll find it more accessible and absorbing than most movies made today. I love Psycho, but I'm not sure it should have taken Diabolique's place in the pantheon of horror movies. Psycho will make you afraid of showers. Diabolique will make you afraid of water.

Posted by Matthew Dessem at 6:40 PM

Nice review, definitely have to catch this one now...

Yeah, you totally should, it's great.

...it successfully associates water with decay and death, which is a reversal of its normal symbolic value. You can see the same value switch being tried in The Ring...

and, of course, "the wasteland."

my (now ex-)roomie and i took a class on the portrayal of homosexuality in code-era hollywood film. i'll make him watch this with me and we'll assess that wife/mistress relationship and get back to you with a full, journal-ready report. with these two women as backstabbing murderers, i don't think they're going to prove some big break from the standard.

Yeah, let me know what you find out. No more on that until you've seen it but there's a very obvious reason why suggesting a gay relationship is okay in this movie, and it's not because they're backstabbing murderers.

Two more recommendations for me! Wages of Fear and Diabolique! Thanks! By the way, Audition really isn't that scary. It is very high on the disturbing factor, but not very high on the scare factor. Its been awhile since I've watched it, but Watcher in the Woods has some of the scariest moments with the old lady's reflection in the mirror. And maybe it was just my childhood, but The Secret of NIMH was pretty scary too. See the original Grudge. Now that is scary.

Off topic, but there you are!

Ps. I won't be offended if you start deleting my comments for not moving any particular critique forward.

Yeah, I thought Audition was really very disappointing—it had all this potential to be terrifying early on, but then when things started to be revealed at the end, it was a big disappointment. I much prefer movies in which the evil force or villain or whatever is much less clearly defined; like the way it's not really clear in Nosferatu if he's responsible for the plague or not, or the way Samarra's origins, powers, goals in The Ring stay really murky and undefined. I thought that the woman in Audition was going to turn out to be some sort of horrible, soul destroying malevolent spirit, and then all she did was stick him with needles and cut off his foot? Not the stuff nightmares are made of. The Watcher in the Woods scared the shit out of me when I was a little kid. I think that one has a strange, letdown of a resolution, too, though, doesn't it? It's like aliens or something? NIMH didn't bug me but I'd read it and so I knew what to expect. Re: off topic, there's no real topic here so don't sweat it.

I just watched Diabolique on the basis of the recommendation here. For what it's worth, if you've seen Ira Levin's Deathtrap, you can see Diabolique's final twist coming miles away.

And if you've seen Peter Jackson's King Kong, you know how Cooper and Schoedsack's version is going to end...

And I saw both twists coming miles away but at least Diabolique's was the original. And it manages to do what few movies can do: scare me at each viewing. That scene in the hotel room when the door opens and... Right up there with the trip at the top of the spiral staircase in The Haunting.

As for the relationship between the two women, it's interesting to note that in the original novel (which plot holds a major difference) it is strongly hinted that the female characters are involved in a lesbian affair.

BTW, your site and I only met tonight but I think I'm in love.

Glad you like the site. But remember, it's an inanimate object, incapable of returning your love. I haven't read the novel, but there are some definite lesbian undertones in the film as well.

I just watched Diabolique. I think it beats out any Hitchcock film I've seen. There is a definite noirish element,too. Check out the slatted and dappled lighting in the scariest bits.

Definitely an undertated homosexual theme between the women - (S.S. says "You need to relax - REALLY relax.")

And look at the way the women's clothing seems to address binaries. At first Simone S. is in black, but then she's wearing a lot of grey, where the innocent (?) wears a lot of white, but sometimes with a black "mantel" or shawl, or housecoat. Watch the changes as the movie progresses.

And, man, what a charming dialogue - plenty of comic relief from the 'boy who cried wolf'.... And each frame lives in its own write.

Frankenstein doesn’t really scare anyone anymore. We continue to watch it for other reasons: for an iconic performance by Karloff, as a morality tale, etc. But fright no longer factors into the equation. We become inured to horror in a way that doesn’t happen with romance, comedy, or drama. Horror as horror has a shorter shelf life than other genres, which partially explains why at any given time you can say a particular film is the scariest ever made (my half-baked theory, anyway). If you want to pick the most romantic film ever made you’ve got to survey the entire history of film. If you want to choose the scariest film ever made the strongest contenders have usually been made in the past 10-20 years.

Diabolique, unfortunately, has two other things going against it: its reputation and its influence. Any film that you’ve heard for forty years is one of the scariest ever made is bound to let you down, and we’ve seen a last minute twist ending so many times since 1954 that not having one in a thriller like this would be the more surprising ending.

One of the most interesting things about a mystery or a film with a twist ending is how different an experience a first and second viewing is. The first viewing is all about being taken in by the filmmakers; if they have done their job well it is an emotionally charged experience. The second viewing is all about objectively seeing if the filmmakers have played fair. Plus the reading of such films changes substantially between first and second viewings. It’s the difference between our perception of reality and reality’s objective existence. For example, initially Nicole (Simone Signoret) appears to have a soft side with respect to Christina (Vera Clouzot), which needs to be rethought during subsequent viewings.

It was revelatory just how much of Vera Clouzot’s death scene was lifted by Hitchcock for the shower scene in Psycho. Both Vera Clouzot and Janet Leigh have their backs pressed up tightly against walls, which they slowly slide down. Clouzot extends her right hand to tear a dressing gown off a hook in the same way Leigh pulls down the shower curtain with her right hand. They both fall onto their left side and emphasis is placed on their vacant wide-open eyes.

Finally, I have a vivid memory of Hitchcock being interviewed on Merv Griffin’s talk show (my grandmother loved that show). Hitchcock spoke about a letter he had received from a woman explaining that her daughter refused to take a bath after seeing Diabolique and would not shower after seeing Psycho. She asked what should she do about this, to which he replied, “My dear madam, send her to the dry cleaners.” (It’s funnier when Hitch tells it.)