Not even Triumph of the Will announces its visual strategy as succinctly as Mon Oncle, which opens with the following credits: 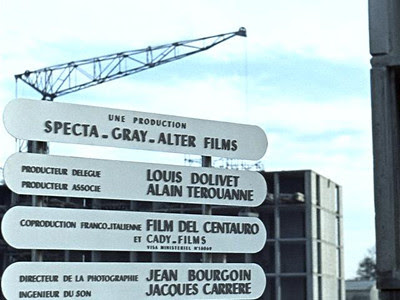 Followed immediately by the film's title: 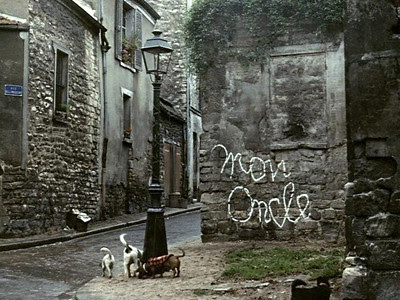 It's cold, sterile modernity versus warm, chaotic life, down to the adorable pack of wild dogs. Bet you can't guess which side Tati comes down on. It's a bit of a stacked deck: outside of Woody Allen movies, I'm guessing pre-Modern France wasn't always as charming as Tati makes it out to be. 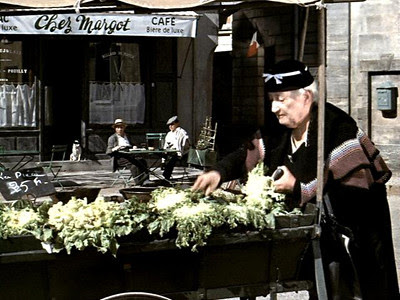 Nor were the worst excesses of modern architecture as magnificently ugly as the film's central set, the Villa Arpel: 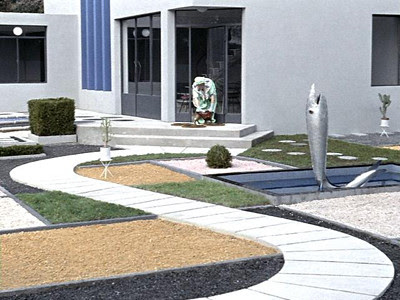 Too bad Mon Oncle was made before Brutalism really got rolling. It's the architectural equivalent of Ween spoofing Pink Floyd; designer Jacques Lagrange found a hidden dial in modern architecture and turned it to eleven. To say Mon Oncle was a step forward for Tati as a filmmaker is to understate the case considerably: Lagrange and production designer Henri Schmitt both worked on M. Hulot's Holiday, but nothing in the earlier film prefigures the kind of absolute mastery of the frame found in Mon Oncle. These would be the best designed sets in cinema—if Tati hadn't gone on to make Playtime. And Tati uses color precisely as Sirk: old France is all warm yellows and browns; modernity is, well, just look at it. 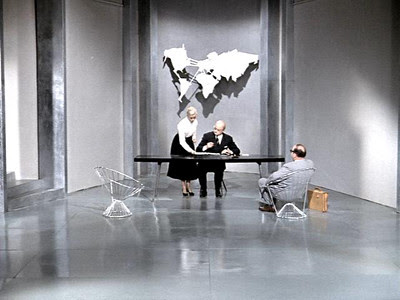 After establishing a hard-line distinction between the old world and the new, Tati throws Monsieur Hulot (dressed for the first time in a warmly-colored brown raincoat) into the gulf between them. There's a lovely shot of him carefully putting a stone back into place on the crumbling wall that divides the two worlds. 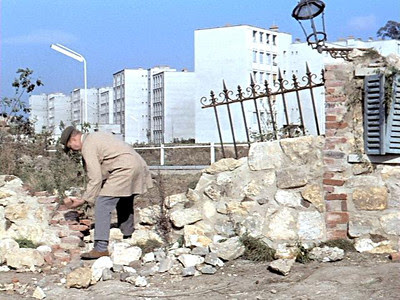 The Villa Arpel belongs to none other than M. Hulot's sister, her husband, and their nine-year-old son. The plot, such as it is, revolves around their efforts to figure out what to do with Hulot. In the character of M. Arpel, we find perhaps the closest thing to an antagonist in any of Tati's films. Jean-Pierre Zola plays him as the very embodiment of pig-eyed self-satisfaction. 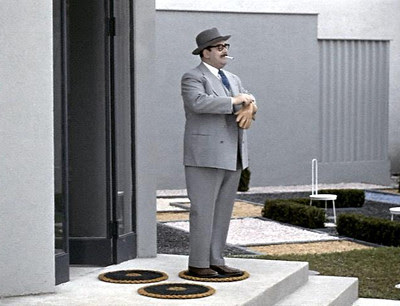 It hardly seems like a fair fight. Of course, calling dirty pool misses the point: Mon Oncle makes no claims of realism. I wouldn't even call it a cinematic essay; it's more of a fantasia on The Theory of the Leisure Class, and there's nothing else quite like it. I'm not kidding about Veblen: his sidenote that the "canon of reputable futility" demands curved driveways (because they waste time and space, they proclaim that their owners have time and space to waste) comes to glorious life in a throwaway shot of Mme. Arpel and her neighbor animatedly greeting each other, staring off in opposite directions. 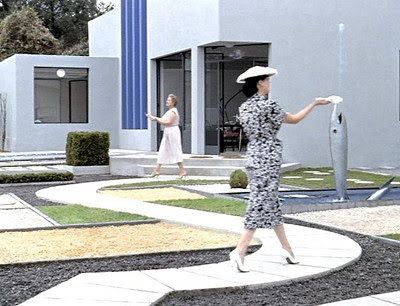 This is not to say that Mon Oncle is a critique of the ways in which modern design has failed to live up to the ideal of form following function, no matter how many times Tati returns to shots of characters pretending to enjoy sitting in painfully uncomfortable chairs. 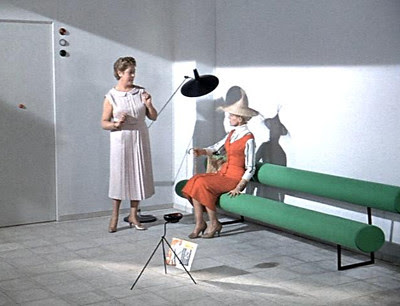 For one thing, M. Hulot's apartment is not exactly a triumph of functional design, no matter what color it is. In a long shot that I'm certain Wes Anderson has carefully studied, we see Hulot ramble his way through various windows and stairwells to the top left of frame. As Matt Zoller Seitz notes, it looks like a dollhouse. 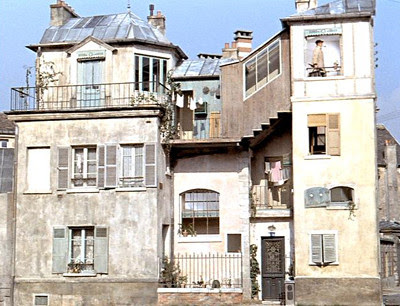 I love Seitz's observation that in the Arpels' hideous fountain, only turned on for guests, "you can see the gears of social need turning." I'm not so certain I'd go along with his assertion that Hulot is in any way part of the "mechanisms behind our modern world," however. You couldn't reverse engineer a smoothly oiled machine from his workplace performance, for instance. 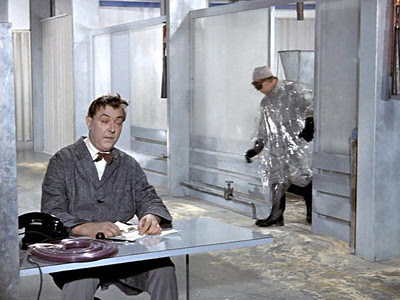 The only time we see Hulot fitting into the modern world like a cog in a gear, it's because he's gotten drunk, flipped a sofa on its side, and passed out. 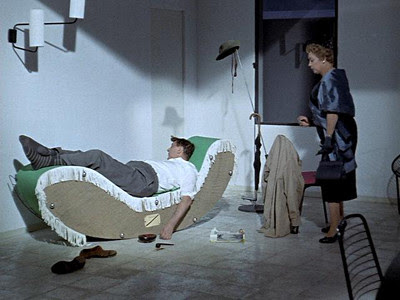 Gears have been much on my mind recently; the best movie of the Christmas season is obsessed with them. It's worth noting here that for all its love of artifice and artificers, Hugo is built on the same premise that animates the Villa Arpel: people have a purpose; they can be repaired and fixed into place. Tati doesn't see it that way: there's no solution to the problem that is M. Hulot. And not just Hulot: one of the most delightful recurring gags in Mon Oncle has to do with a street sweeper who somehow never... quite... manages to swing his broom. There would be no place for him in Hugo's train station, where everyone has a job to do (even if that job is filming our dreams). Of course, there's an inherent tension in a meticulously crafted film that argues that meticulous craftsmanship is anti-humanist. But I think Mon Oncle manages to have it both ways—remember, the wall between Hulot's world and the Villa Arpel is crumbling. There's a wonderfully generous moment at the end of the film when M. Arpel, after banishing Hulot to the provinces, causes some Hulot-style chaos of his own. After inadvertently making a traveler walk into a pole, Arpel and his son hide behind their monstrous car, the son takes his father's hand, and for a moment, the two worlds are united. 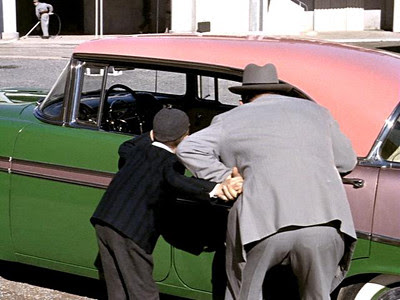 So here's Tati throwing a brick into the clockwork that rules us, beatiful and intricate though it may be:

People think it is a message, but it isn't: one should be free to say to a man who is building a house, "Be careful. It might be too well-built." 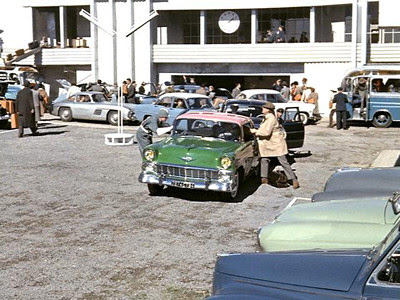 It may be a soulless machine, but it makes me cry like Daisy Buchanan.

Posted by Matthew Dessem at 4:52 PM

I must say this is my favorite of the Hulot films in how it balances his concerns with his comedy. Playtime is great, but is almost too awe inspiring where I can't relax when I watch it. Here though I can have some fun and laugh as I pick it apart. it doesn't scream out for attention even if it gets it all the same. Though an other element might just be because it reminds me of those Chuck Jones Curious puppies cartoons.

Another great review full of penetrating insights; however, M. Arpel's vehicle is a 1956 Chevrolet, not a Cadillac.

Just saw Hugo the other night. LOOOOVED it!

Mon Oncle came on TCM this summer. I flipped to it as it began to watch a bit as I brushed my teeth and did other things one does before sleeping. I ended up watching the whole thing. Something about the film's rhythmic presentation of gags and the gloriously hypnotic refrain of the repetitive theme music made me lose track of the passage of time. The rush of the modern world slowed down to a crawl as I giggled along with Tati.

Loved that list of "conservative" movies. I can understand conservatives misreading some of those films, but I was blown away by the inclusion of Gattica and Brazil. Ultra-conservatives can apparently twist anything to fit their agenda.

@Ed: The list of conservative movies did say "or at least films that resonate with conservatives in a particular way." It is perfectly possible for liberal filmmakers and actors to make a film that embodies values that conservatives hold dear. This list may not be the greatest example of this--few of the people involved strike me as real cinephiles--but the basic point they're arguing is absolutely legitimate.

And Gattaca and Brazil both express things that conservatives do in fact believe: that artificial genetic selection and discrimination is a bad thing that modern science has been reckless in making possible, and that massive government bureaucratic control is highly inefficient and quietly tyrannical. Brazil may also depict the government as a police state obsessed with nonexistent terrorists, a much more liberal issue, but that does not eliminate what went before. As to Gattaca, I have no idea how that movie doesn't fit into conservative beliefs all the way round: A man overcoming circumstances of his birth and the restrictions of bureaucracy to succeed on his own merits through hard work, thereby proving his individual human worth against an ideology that sees him in secular Darwinian rationalist terms, is pretty much the conservative ideal.

Mon Oncle is my fav comedy of all time,Tati is one of the directors I explore in Criterion http://www.tasteofcinema.com/2012/12-directors-i-explore-in-criterion-collection/