It's easy to forget just how much comedy is fueled by misanthropy until you encounter a film like M. Hulot's Holiday. As something of a misanthrope myself, I have mixed feelings about this kind of movie. On the one hand, it's a gentle, affectionate film that manages to evoke the laziness of summer vacations without being lazy itself. On the other hand, this is a comedy in which no one gets kicked in the nuts. How on earth did they cut a trailer?

M. Hulot's Holiday may have been released in 1953, but its sensibility and technique are both from silent films. Although it is nominally in French, there are very few subtitles, and none of them are strictly necessary. It doesn't take more than an instant to recognize Hulot as a silent film character, as iconic as Chaplin's Tramp, instantly recognizable by silhouette. 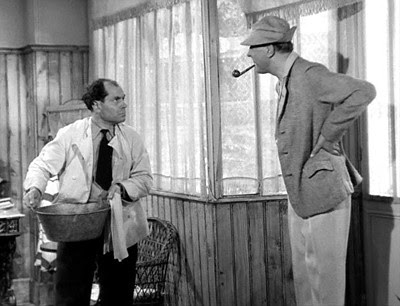 Although he has the same talent for pissing off waiters, hotel managers, and functionaries of all stripes, Hulot generally causes less chaos than the Tramp. The pacing is very different from a Chaplin film, or indeed, most comedies, silent or no. There are a few sequences of rapidly escalating catastrophe, most memorably when Hulot manages to set an entire shed of fireworks on fire. 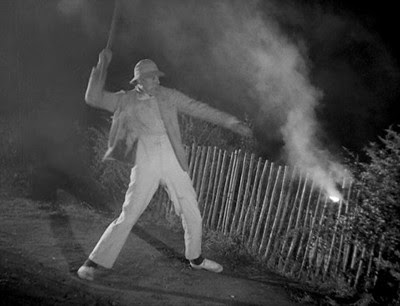 This is the kind of comedy we're used to: the clown racing around as things blow up around him. And there are other instances of brilliant physical comedy, even if they don't have that "Hall of the Mountain King" sense of impending disaster. Hulot's tennis match is a particular standout. 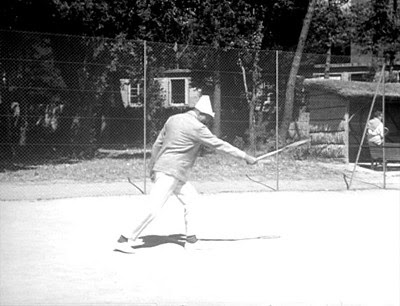 But I honestly laughed hardest at a moment that no one but Tati could have pulled off: a shot of Hulot near-hypnotized by a gob of taffy nearly falling from its hook. 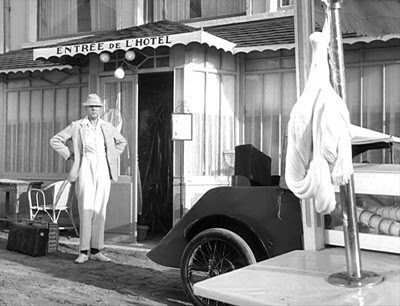 The taffy slowly droops, getting closer and closer to the counter, until at the last minute, just as Hulot is about to spring into action, the hand of the proprietor sweeps in from out of frame and catches it. Tati stays on this for a good thirty seconds (and returns to it later in the film), and I can't think of anything else quite like it. The rhythm of the joke, it seems to me, is not far from the peek-a-boo game we all found so mind-blowingly hilarious as babies, and maybe that's what Tati's tapping into here. Or maybe I'm just the kind of person who would feel the same irresistable urge to grab the taffy before it hits the cart. In any event, it cracked me right up.

Still, it must be said that visual language of the film is surprisingly conventional, at least compared to the loopy modernist brilliance of Play Time. I saw M. Hulot's Holiday for the first time about a year after Play Time and it's amazing how dramatically his visual style evolved. There are a few visual puns of the sort that Tati perfected in his later films, like this shot of a man transformed into a horse: 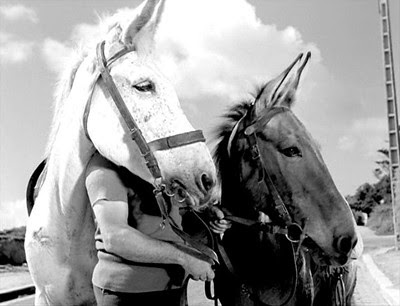 There's one brilliantly executed longer joke of this sort. Hulot's car breaks down at a funeral, and he drops the spare tire into a puddle of muddy leaves just as a chauffeur gathers funeral wreaths for the ceremony, and you can probably see where this is going: 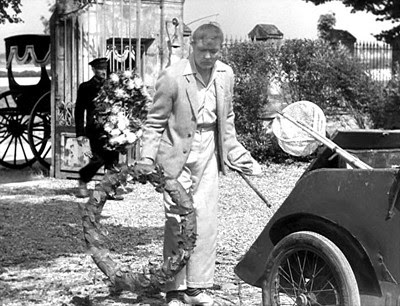 The interesting thing about the confusion with the spare tire is that it only works in black and white; you could probably get an undergraduate paper out of that fact if you throw the name Borges around enough.

I try to be cautious of my tendency to overpraise work that yields to, shall we say, vigorous critical exegesis; at various points in my life I've been a Pink Floyd fan and an English teacher.1 So it's possible that my preference for Play Time over M. Hulot's Holiday stems from my own character flaws—or my sense that modernity is attacking me, too. I will admit to being charmed beyond all measure by the one point where everything comes together, a costume ball where Hulot, against all odds, has a moment of grace and dignity. 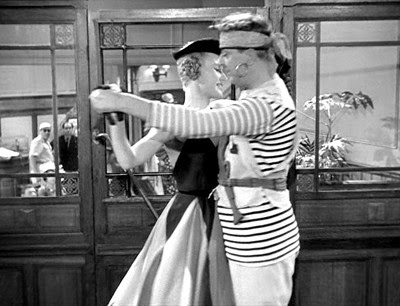 Of course, shortly thereafter, Tati has him catapulted at great speed into a canal. 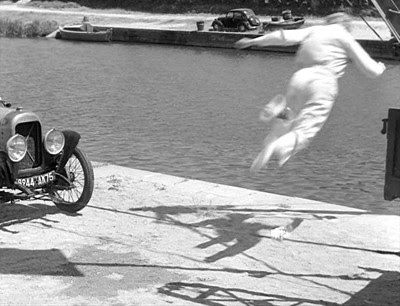 Comedy, like science, requires victims. But the unique thing about M. Hulot's Holiday is that it isn't about Hulot's ritual humiliations. Tati is at least as interested in the sound of the ocean, the strange collections of people who are thrown together on vacation, and that moment—you must have been around six—when your parents' car finally turned off the highway and the ocean came into view. 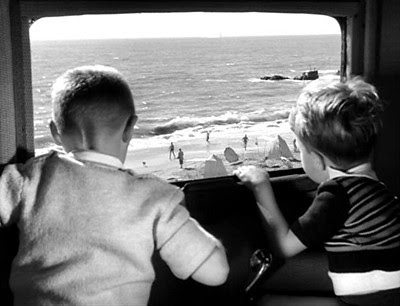 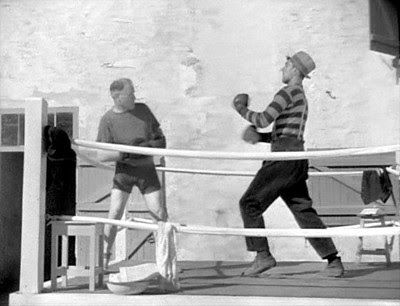 I couldn't read the post because something badly behaved (I think the CastTV module) kept scrolling/jumping the page away from where I was reading literally every five seconds.

Which is a pity, because I do enjoy your reviews.

When I first watched M. Hulot, it didn't do anything for me- the comedy is so gentle, and so buried under the pleasantries of what seems genuinely like a pretty nice vacation, that it's pretty easy to miss it altogether.

I came back after watching other Tati Hulot movies, and it worked much better. In some ways, it's a movie that makes _more_ sense after you see Playtime, or at least Mon Oncle or Trafic- it doesn't have the span of vision that Playtime does, but it's impossible to miss Tati's wavelength there, and once you're on it M. Hulot is a much more enjoyable film. It's not his best work, but once you're a fan, it might me his most relaxing (and least melancholy.)

Nice to have you back again. Funny piece of trivia, but this is another early film to have Christopher Lee as an extra. Seems to happen a lot in the collection.

It doesn't seem too bad to have a lesser reaction to this film than the other Tati's. It's the only one I saw in theaters and it still seems the smallest to me. It's clearly Tati on holiday as much as Hulot.

By the way have you seen The Illusionist yet? It's a lovely closing chapter to the Hulot book.

Sorry to hear that -- I'm not having that problem -- what browser, OS?

Definitely least melancholy. I know some people prefer this to his other work (I think Ebert said this was what he'd be remembered for) and it kind of baffles me. It's lovely, but come on, Play Time?

I loved The Illusionist. Where is Christopher Lee in this film?

(Also, re: being back: MGM moved offices, which meant 60-70 hour weeks for most of the summer, which meant as soon as that was done I left the country for as long as possible. I'm back).

I believe it's during the tennis match that he's present, though it could also be the funeral.

Oops, with two seconds of research found out he just dubbed the movie, which must have been an easy task.

Rosenbaum made a comment once that Tati was the easiest man in the world to make friends with- you just had to tell him Playtime was your favorite movie. I don't think there's any question that it's his magnum opus, though I think if Tati had finished Confusion, that might have been a contender.

I liked The Illusionist in a lot of ways, but it seemed almost comically melodramatic and depressing at times- in a lot of ways, I thought Triplets of Belleville more successfully captured the experience, and the mixed joy and melancholy of a Tati movie. The Illusionist was so gorgeously animated (and such a noble attempt, in many ways) that there's no way I wouldn't at least like it, but it feels more like a brilliant failure than a success to me.

Chomet's got to be one of the most interesting people in the world working in animation right now, though. The only other animated movie I've seen in a decade that compared to what he can do was the Secret of Kells.

I'm having the same problem with the page jumping around (Safari 5.05; OS X 10.6.7). Saved the page as a Safari web archive and it still misbehaved, but was finally readable from the Finder in "quickview" mode. I believe I noticed the same erratic behavior in the previous post.

Okay, I actually see the same thing looking at it in Safari. I've disabled the trailers thing and no longer see the problem on my end--does it work for you now?

My favorite Of Tati's is Mon Oncle, though it is long. There's a unique beauty to it's humor that the other films don't have. It contains more of a childlike sense of wonder of the world while it critiques. The last shot of the dachshunds running the streets as the camera pulls back into a window with the gauzy curtain is so perfect it gives me a little tear. It makes me think of some of Michel Gondry's work.-Shawn McGuire

Nice post! To me Tati is a great observator of the world around him. This is no surprise that Play Time is considered by so many his masterpiece. This is his most personal observation of the transition of the urban life of our society.
Personally, I had many difficulties with the subtle comedy of Hulot's Vacations... But it is still a wonderful gentle film.

I just can't see M. Hulot's Holiday as a movie, I'd rather remember it as a moment of my on life, like I were one of those vacationers.
From the very beginning, at the train station and its joke, I knew I would feel good. And I totally felt this way. I love Hulot's dignity, although everyone else might think he's only embarassing himself, he keeps a bright light, almost untouchable on his involucre of innocense. That's it, Hulot has the innocense of a child and that's why, I think, everyone can relate with some of his experiences.

I had the same reaction as others - it took me watching MON ONCLE and PLAYTIME before coming back and really enjoying this one. I'm glad to see the taffy scene get such a great mention - it's a great example of how timing is essential for comedy to work. His stance, too, as he watches the taffy stretch is burned into my brain as the quintessential Tati image.