The Lady Eve, 1941, written and directed by Preston Sturges, from a story by Monckton Hoffe.

It's nearly impossible to write about The Lady Eve without violating Richard Brody's dictum that "the past should be used to nourish the present, not bludgeon it." In the general case, I think Brody's skepticism toward the TCM Industrial Complex is salutary: nostalgia for classical Hollywood cinema is usually more tribal signifier than reasoned aesthetic.1 Unfortunately, this isn't the general case, it's The Lady Eve, so please forgive me some light bludgeoning. I grant that Preston Sturges films depend on social mores that we're well rid of, but of all the films I saw in 2010, the only one that gave me more pleasure than The Lady Eve was Trouble In Paradise. Well, it's no shame losing to Lubitsch.

The world isn't exactly waiting with bated breath for another essay about how witty, humane, and generally hilarious Preston Sturges movies are, and adding my voice to the chorus seems about as useful as trying to find something totally new about Silas Marner.2 So, yeah, The Lady Eve is phenomenal: if you're looking for an appreciation of what's so great about it, I recommend starting here and moving on to, well, basically every other word anyone's written about it. If you're interested in how the film works, this is on point, and this is definitive. Adding my own words to the pile feels like proudly showing a professional con artist how to palm a card.

If by some misfortune you haven't yet seen The Lady Eve, I think giving the film-critic-Cliff's-Notes version here would be doing you a disservice, and urge you to watch it as soon as possible. But to continue my tradition of deferring to better critics, here's the plot in haiku form, courtesy of Matt Zoller Seitz3:

And here's the film in a single image: 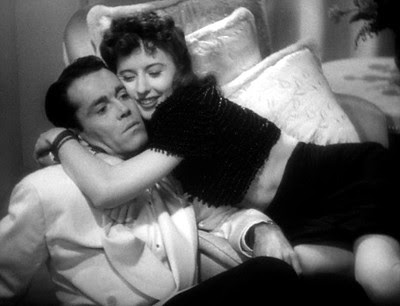 The one thing I will say is that Stanwyck and Fonda are so good in this film that too little attention is paid to supporting performances that, in any other movie, would be scene stealers. So raise a glass of Pike's Pale Ale to Charles Coburn: 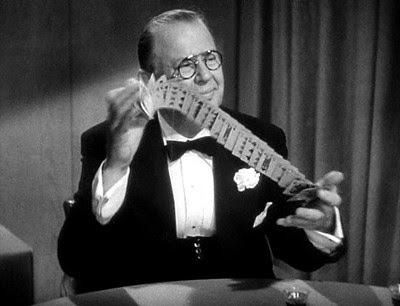 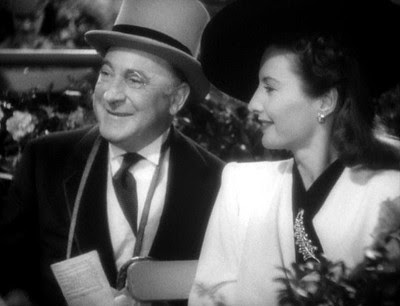 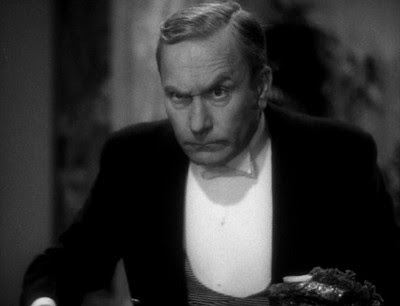 And especially Eugene Pallete, who has a pretty deep voice for an infant: 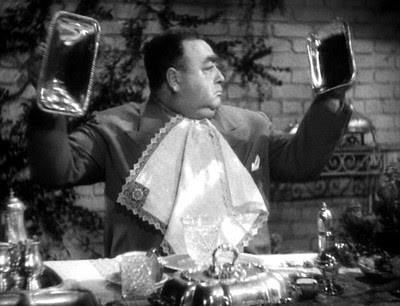 I'll stop before this turns completely into an episode of The Chris Farley Show. Tune in next week, when we'll confront the mountain of critical work that has undoubtedly already been written about Masahiro Shinoda's beloved Bunraku puppet-play adaptation Double Suicide! 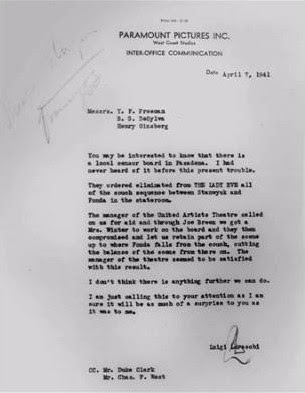 They had about as much taste as you would imagine, since they apparently tried to cut "all of the couch sequence between Stanwyck and Fonda in the stateroom." If you saw The Lady Eve in 1941 in Pasadena, it's time for a second viewing.

1With the exception of the Janeites, there's no analog in the world of literature. The difference, I think, is marketing: as soon as Turner showed the studios how to extract money from their libraries, they've been selling the idea of Hollywood's Golden Age relentlessly. Any day now, they're going to resurrect Photoplay.

2Does anything evoke the mid-nineties as immediately as setting the "key passage" of Dunst's paper in Chicago?

3In addition to his brilliant video essays and prodigious writing for Salon.com, on Fridays Zoller Seitz writes haikus on topics chosen by his Twitter followers. He doesn't really need to—it's just virtuosity.

Posted by Matthew Dessem at 6:35 PM

Well, I've got to speak up. I've been reading your blog for a couple of years now, and it's been fantastic. It's not a recent phenomenon that your posts have become less and less frequent, and I understand that you've got a lot more important things to do than post online.

But seriously.... two months of waiting for a series of links to other reviews? Really? I understand you don't want your posts to reek of plagiarism, but didn't you realize that by undertaking the mission to write about all the films in the CC that you would be writing about some of the most highly revered and most written about films of ALL TIME?

I don't want to seem ungrateful. What you are doing is on your own time and you receive no payment whatsoever. But wouldn't it be cool if you gave it a stab anyway?

Idiom alert: It's a very common error, but you should have written "bated breath." A negligible flaw in another first-rate review.

@Rand Careaga — Of course I should have; fixed. Thanks for pointing it out!

@Brendan Flaherty — After a month of watching and rewatching The Lady Eve, I really didn't have anything to say about it that hadn't been said better elsewhere, couldn't summon much enthusiasm about restating other peoples' arguments, and figured it was better to move on than keep dicking around. Sorry to have disappointed, though I doubt you would have been happier with a by-the-numbers rundown of other peoples' ideas (and I certainly wouldn't have been). The last thing I want to do with my time is write high school term papers. (And yes, I know the archives are filled with many examples of me doing exactly that. If there's a difference, beyond the fact that I'm more impatient lately, it's that I love this movie and would rather write nothing at all than do it any disservice).

Hey, fine by me. I re-read my comment and it might have come off sounding more negative than I intended. Keep up the good work.

You state,
" It's nearly impossible to write about The Lady Eve without violating Richard Brody's dictum that 'the past should be used to nourish the present, not bludgeon it.'"

There's a simple reason why you find it nearly impossible: you are dealing with a romantic comedy. Romantic comedies are the one case where the nostalgists are right! How the romantic comedy got so bad could be the subject of an entire book, but The Lady Eve is a perfect example of my primary theory - it lies in the intelligence and self-assuredness of the protagonists. Naturally their intelligence (Gary Cooper), or self-assuredness(Barbara Stanwyck) becomes useless once they are besmitten by their soul-mate.

For some reason mainstream filmakers seem almost afraid of intelligent characters (probably because we won't identify with them) - instead we see schlubby guys or women with no self- confidence (the eptiome is Meg Ryan in Sleepless in Seattle) who are redeemed by love.

There are of course other explanations for why romantic comedies really did have a golden age, and there's a good argument for the role that censorship played.

If you havn't seen a lot of Sturges, I highly recommend that you go beyond the Criterion selection and view Miracle of Morgan's Creek, The Palm Beach Story, and Hail the Conquering Hero. In fact, you can't go wrong with any of the comedies that he made during his miraculous run in the early 40s.

Keep up the good work!

I recommend Christmas in July too. It's about as perfect a film as Sturgess ever made. -- Shawn McGuire

Mark - I stand second to none in my hatred of any form of censorship and firm belief that it leads to infinitely more harm than good. So I doubt it's the desperate wriggling past the censor's disapproving scissors that made Golden Age romantic comedies so good, as much as it was the writers' love for their characters' wit and need to live their own lives not shackled by societal constraints - which I doubt seriously any modern "rom-com" writers possess.

Look at the Golden Age romantic comedy's plethora of quick-witted women, who were the equal of the men they set their caps for - Stanwyk, Katherine Hepburn, Rosalind Russell, Ginger Rogers, Joan Blondell, Ann Southern, etc., etc., etc. Compare those women to - Meg Ryan? Katherine Heigl? Jennifer Anniston?!?!? These are women defined by their neediness, not their intelligence or strength of character. No wonder the men they fall for are at best cardboard cutouts (Hanks), when they're not either arrested adolescents (any Apatow or Farreley Brothers "hero") or misogynistic brutes (hel-LO, Gerard Butler!).

The closest you'll find to a Golden Age romantic comedy female hero is Amy Adams circa ENCHANTED - and rest assured, Hollywood is desperately trying to crush her wit and spirit so she can be as big a Sucking Black Hole Of Need as Anniston or Ryan! I also feel Heigl has it in her as an actress to be more than the screechy needy simps she's played so far - which might explain her vocal contempt for those roles....

Like the Criterion Collection itself, it's your curatorial function, telling us why this movie is worthy of inclusion or why you're going "HUNH? WTF did Criterion include this one, anyway?", that makes this blog valuable. Well, that and the way you express your opinions, that make you worth reading in the first place....

I'd just like to note that Criterion's "The Lady Eve" has my all-time favorite DVD commentary. I'm used to the savvy critics Criterion employs giving me eye-opening insights that help me see each film in a whole new light. But it really delighted me to hear the usually grave and reserved Marian Keane unable to disguise her love for and enjoyment of this film, or the great affection she has for the characters. She can't stop referring to Henry Fonda's character as "Hopsy," and her happiness is infectious.

I'm very much enjoying your thought-provoking essays and often uncanny choice of frame grabs. Keep up the good work!

I'd just like to note that Criterion's "The Lady Eve" has my all-time favorite DVD commentary. I'm used to the savvy critics Criterion employs giving me eye-opening insights that help me see each film in a whole new light. But it really delighted me to hear the usually grave and reserved Marian Keane unable to disguise her love for and enjoyment of this film, or the great affection she has for the characters. She can't stop referring to Henry Fonda's character as "Hopsy," and her happiness is infectious.

I'm very much enjoying your thought-provoking essays and often uncanny choice of frame grabs. Keep up the good work!

When they resurrect, Photoplay, I'll be in line to buy the first copy.

What a great movie. Though I always confuse it with All About Eve when I recommend it to friends.

Interesting. A tall friend of mine confused it once when recommending it to me, too. Weird.

I really feel there's a gripping and cohesive narrative somewhere in the spam links by Bryan above...