Fiend Without A Face, 1958, directed by Arthur Crabtree, screenplay by Herbert J. Leder, from the short story "The Thought Monster" by Amelia Reynolds Long.

Some movies are brilliant from the first frame to the last. Some are irredeemable drek all the way through. And some have flashes of greatness. Fiend Without A Face falls into the last category, although it's not so much a flash as a splatter. 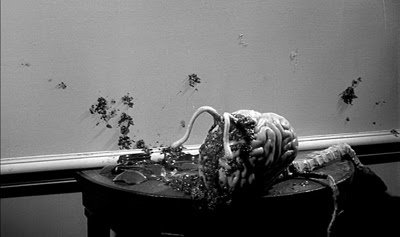 That's one of the eponymous fiends, the physical manifestation of a human thought, in its death throes. Yes, in this movie, human thoughts are represented as giant brains with attached prehensile spinal columns. With eyes on stalks. When shot, vast quantities of raspberry jam squirt out of them with horrible burbling noises. They eat brains. They're powered by atomic radiation. And they can fly. More or less what Pascal wrote about in Pensées, if I remember it correctly.

As awesome as flying, brain-eating brains sound (and they are pretty awesome), the fiends don't actually appear for the first hour of the movie. So the audience has to wade through the obligatory "mysterious string of deaths in a small town" section to get to the good stuff. The first hour has its compensations: a pre-Doktari Marshall Thompson is very, very serious in uniform: 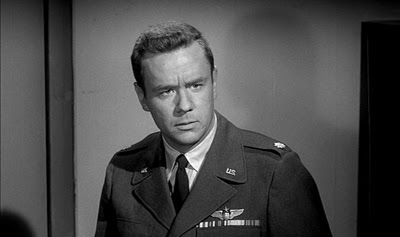 And Kim Parker, as Thompson's love interest, does what she can to help with the marketing campaign: 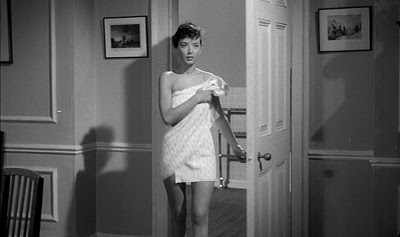 That shower scene is completely gratuitous and not very risqué, but it was featured in every advertisement and poster for the film. So if you don't get to see women's legs or shoulders in your day-to-day life, Fiend Without A Face has that going for it. But there's only so much narrative interest you can squeeze out of a whodunnit where Kynaston Reeves' character is clearly, obviously, a mad scientist. 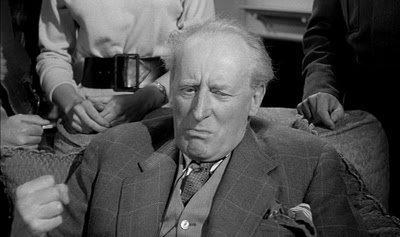 People address him as "Professor Walgate," though he doesn't teach! He does that fist-clenching thing that only mad scientists do! No one in town understands his research! Worst of all, he's written prop books: the ominously titled The Energy of Thought and the ominously spelled Sibonetics: The Application of Logic To Electronics. 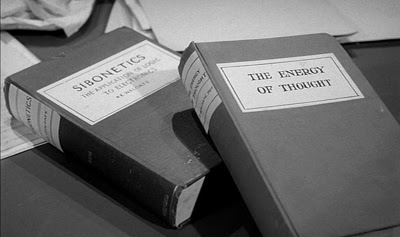 The misspelled title, the peeling label on the spine, the fact that the spine of Sibonetics has embossed printing everywhere but the title: all of this screams "crackpot." The local citizenry can't believe one of their own could be behind the mysterious disappearances, especially when there's a more obvious scapegoat: nearby Stock Footage Air Force Base, pictured below: 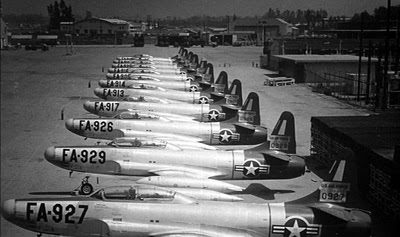 They appear to be about as well-staffed as Professor Walgate's publisher; this is the most personnel in any shot, during a test of an experimental radar system: 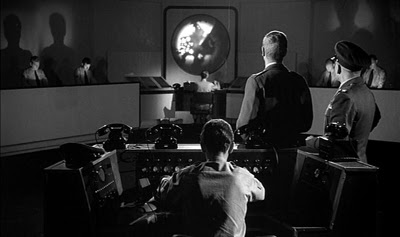 It's worth noting that there are more personnel here than there are at the nuclear plant that powers the base: 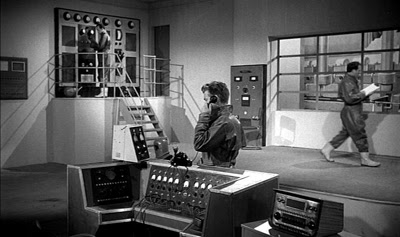 What's more, apparently radar stations and nuclear plants are controlled with the same equipment, an early example of modular design. Note that although you need four more telephones to control a radar test, the consoles are otherwise identical.

Nobody sees a movie like Fiend Without a Face for the set design or snappy dialogue, though, and within the realm of B-sci-fi/horror, this is a fun little movie. It's certainly better than The Blob, even without Steve McQueen. Crabtree knows how to shoot suspense, especially in the sequences where the fiends are still invisible. They move around with a distinctive thumping, slurping sound that is surprisingly creepy. There are decent "stuck in the house alone with the monster" sequences (especially the mayor's death). And as on-the-nose as much of the dialogue is, it's hard not to love a film that introduces us to the main character by showing him smoking and popping pills at his desk, while his subordinate asks him, "You ever think of trying sleep instead of Benzedrine? You know, you might like it." 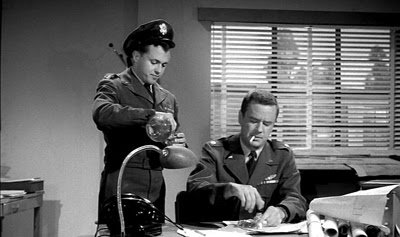 So, yeah, there's some goofy charm here. But the movie's not famous for goofy charm, and it would have long faded into B-movie obscurity were it not for the over-the-top gross-out fest that is the final fifteen minutes. Actually, it would probably have been famous even without the special effects, because without the "locked in a house frantically boarding up windows while countless horrors try to get in" sequence, we would not have had The Birds or Night of the Living Dead. 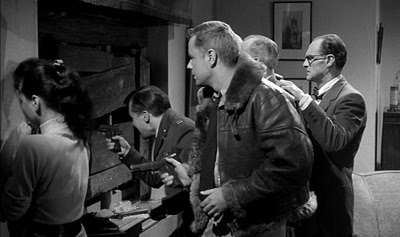 On the other hand, without Fiend Without A Face, we might have all been spared Gore-Met, Zombie Chef From Hell and basically any other schlock horror that ignores the uncanny in favor of the abject. Because: 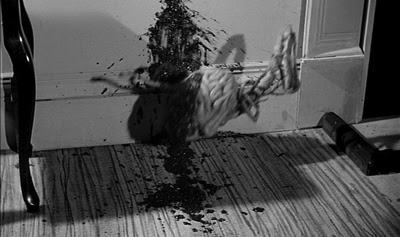 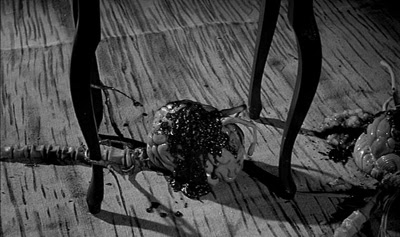 The fiends' deaths aren't just grosser than anything that came before, they're grosser than just about anything that came after, at least until Cronenberg. No, the stop-motion animation isn't very convincing, and yes, they're kind of silly looking to begin with, but there's something about the burbling noise they make as the goop squirts out of them that's completely stomach turning. Inducing nausea isn't enough to make a movie great (look at Salò), and this isn't a great movie. But even a cursory glance at the horror and sci-fi that followed it will show that, for better and for worse, Fiend Without A Face has cast a much longer shadow than your typical Z-grade horror. For a movie made for almost nothing by a producer whose greatest goal was to build England's answer to American International Pictures, that counts as an extraordinary success. 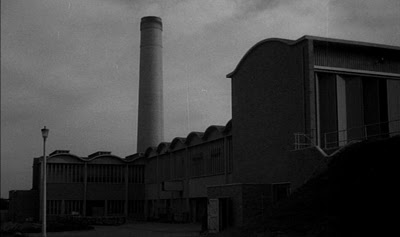 He follows this by flickering a few single-frame inserts of all white: 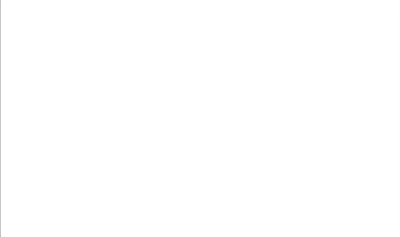 And then cuts to stock footage of a model exploding that is clearly not the same building, if you look at the first frames of it going up: 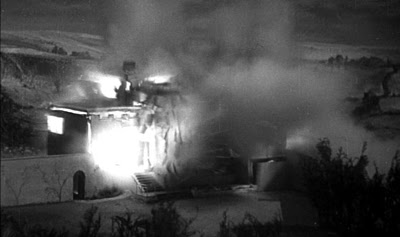 But since the "building" is obliterated in just a few frames, and the flying debris that follows could be from just about anything: 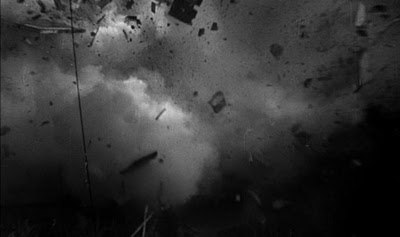 The effect viewed at normal speed isn't half-bad. And must have cost approximatelly nothing. Which is a long way of saying I'm planning on using a lot of footage from Roland Emmerich movies in anything I do going forward. In 1958, it was the place to show horror films in New York City, complete with Arclight-style lobby exhibits on the sidewalk itself: 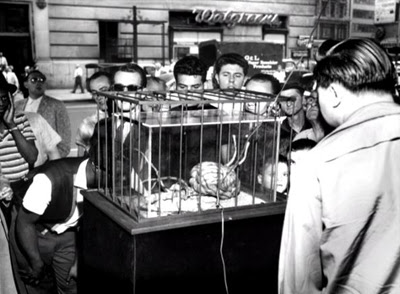 That's the right kind of theater for Fiend Without A Face, but it's not where it premiered. The geniuses at MGM sent it for a tryout, along with The Haunted Strangler, to Detroit's Adams Theater, which was MGM's prestige house in the area. Before Fiend, it was showing Gigi, and the theater manager was less than enthused with Richard Croydon's suggestion that they promote the upcoming films by setting up a coffin with a body in it in the lobby. Things didn't go well for the theater after that; it was finally demolished just this summer, but didn't age gracefully. It did a stint as a porn theater, tried unsucessfully to go back to legitimate movies, but was finally sunk when it was the site of a homocide and a shootout (separate incidents!) in 1988. Here's the auditorium circa 2005. Which just goes to show: no good will come of inadequately promoting a Karloff picture.

It's posts like this that make me appreciate Netflix's "Add to Queue at Position #1" feature.

Great review, Matt! It's a terrific monster movie (although, better then THE BLOB? I'm not sure.)

I've long suspected that the scene in ALIENS, of the facehuggers attacking Ripley and Newt, was influenced by the brain attack at the end of FIEND.

I assume you're adding Gore-Met, Zombie Chef From Hell to your queue. Bravo!

I don't know how I could have missed the facehuggers, down to the tails they wrap around their victim's necks. I'd guess that the original Alien owes Fiend Without A Face a debt, too.

I realize that I may be clutching at an irrelevancy here, but if the script had British origins, the title 'Professor' may not be wrong. In the UK, a Professor is someone who has a department, not just a mere lecturer as in the U.S., and the title may continue to be used after retirement, for ever. From the suit he's wearing, I think this could be the answer.

Love the stories about the old movie theaters. Sad to see them demolished.

Fiend Without a Face is a fun flick. But I can't wait for you to review Black Narcissus. This is my favorite Powell Pressburger film. Watch it a few times and then see it again with the Scorsese commentary.

Btw, you declared that you are going to watch every last DVD in the Criterion Collection. Well, that could just be endless! You do mention other, more current films sometimes, but it would be nice to hear your thoughts on whatever non-Criterion titles you are now obsessed with.

I just saw Julie & Julia. It's an unnecessary piece of fluff that taps into the Top Chef craze. That Meryl Streep is great is not the point. The point is that they didn't give her the whole film. Imagine if they had done this to the Edith Piaf film La Vie en Rose, and cut in scenes of a younger woman inspired by her recordings. Feh!

Saw The Hurt Locker. A tense, well made thriller that doesn't have much going on in the way of characterization. It's standard hero stuff. Great cameos from two name actors.

My next film will be Ponyo. I tried to see it this weekend but I had to protest the pending Referendum 71, which proposes to take away my state (Washington) domestic partnership rights, rights I cherish, despite having to get dragged to movies like Julie and Julia... A second time slot opened up for me today, Sunday August 16th, 2009 (I notice the date doesn't appear on these entries) but I had to take a friend to the vet to have her dog put down. So Ponyo just didn't happen for me. I'm going crazy though. Hand rendered Miyazaki is out there playing in the theaters, and I haven't yet seen it!!!!

Sorry for not writing much about Fiend w/o a Face. I don't really have any insights. You pretty much covered it well, as you usually do.

awesomeness. do you know where i can find any history of these theaters, books, blogs whatever

Love the stories about the old movie theaters. Sad to see them demolished.thanks

Fun movie and funny review. You've hooked me to read more of them.

If you look closely, you will also see a filing cabinet labeled "M-L"