In its rough outline, The Bank Dick sounds almost hard boiled. A misanthropic drunk with a miserable family life lies his way into a job as a bank security guard. Once there, he convinces a coworker (and son-in-law to-be) to embezzle money and invest it in a stock market scam. When an auditor shows up looking for the money, he collaborates with a sleazy bartender to poison the auditor to cover up the theft. Only that doesn't work out quite the way he planned it either. David Mamet could direct it. But odds are he wouldn't cast this man in the title role: 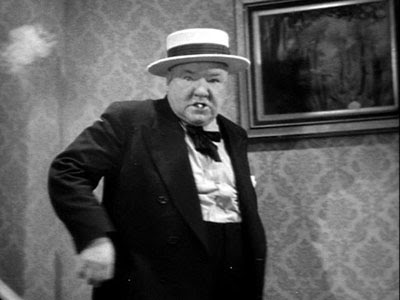 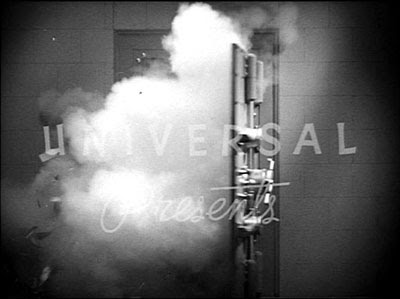 That's the last time you see that safe, hear anyone mention a safe, or see any explosives. That's par for the course; no one involved in the film gave a damn about telling a story. The movie exists just as an excuse for W. C. Fields to do his W. C. Fields thing: putter around drunk, get into trouble, and say and do morally reprehensible things. Fortunately, that's more than enough to keep me amused.

Fields plays an unemployed alcoholic named Egbert Sousé, (pronounced, as he continually reminds people, "sou-say, accent grave over the 'e.'") His only goal in life is to slowly drink himself to death, but he shares a house with his wife, mother-in-law, and two daughters, and they have other plans. Basically, their plans seem to involve sitting around the house doing crossword puzzles, but that doesn't mean they aren't disappointed at Egbert's failure to provide. And they express their disappointment... physically. Within the first five minutes of the film, Sousé's adorable youngest daughter gets adorably angry enough that she throws an adorable ketchup bottle at his head. 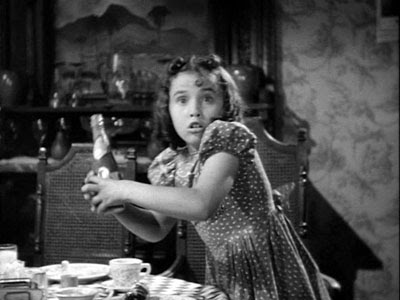 I lost count of the number of times Egbert gets hit in the head by a projectile in the course of the movie, but this is a representative still: 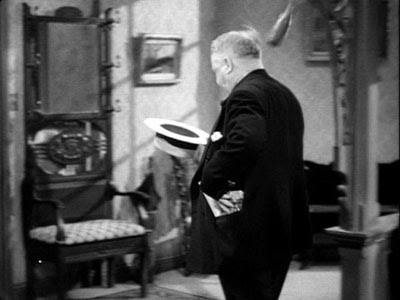 Fair enough. Fields does the typical comedy thing: letting out a bizarre, high pitched yelp of pain and staggering out the door. Very funny. But then he comes right back in and attempts to murder his daughter with a concrete vase: 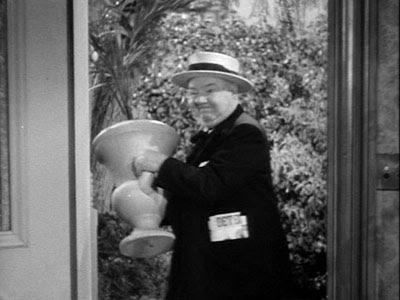 And that's the real gag. A great deal of the pleasure of this film comes from moments when we underestimate the level of animosity Egbert has for everyone around him. Homer Simpson's character often works in much the same way (think of him strangling Bart), and as in "The Simpsons," The Bank Dick operates in a world where sloth, dipsomania, and mendacity are invariably rewarded. Actually, Egbert's world is more morally inverted than Homer's; on "The Simpsons," Homer usually has to learn some sort of lesson before an episode reaches a happy conclusion. But Egbert learns absolutely nothing.

The film is at its best when Egbert is treated with undeserved dignity, as in the scene where he lies his way into a job as a film director. He tells a desperate producer, "In the old Sennett days, I used to direct Fatty Arbuckle, Charlie Chaplin, Buster Keaton and the rest of them... Nights, I used to tend bar." You can't really write about his timing in a way that makes that line as funny as it is when he delivers it, of course, but you can appreciate the way this sequence works from this still of production assistants carrying their director around like the maharaja: 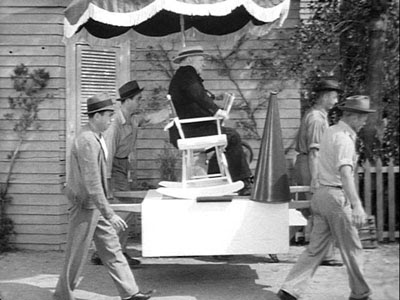 Of course, Egbert's dignity never hangs around for very long, whether he's falling out of his chair: 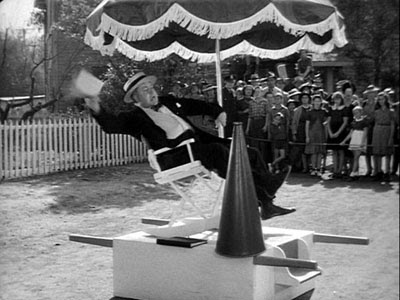 or getting hit over the head by his daughter once again: 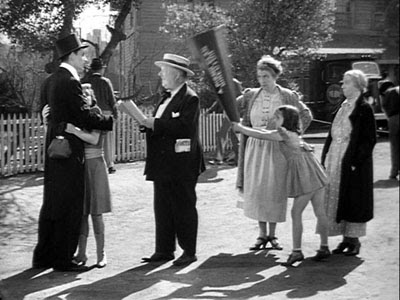 Shortly before being hit on the head, by the way, Fields explains to the movie's leads that he's changed the film slightly: "Instead of an English drawing room dray-ma... I've made it a circus picture." And then the plot he describes is not, in fact, a circus picture, but a sports movie. The Bank Dick never really goes anywhere from here. Sousé falls over backwards on top of a bank robber and tells everyone that he foiled the crook's escape deliberately. This gets him a job as a bank dick, but what he really wants is alcohol. Which, fittingly enough for a "dick," he prefers to get at an establishment he refers to several times as "The Black Pussy." 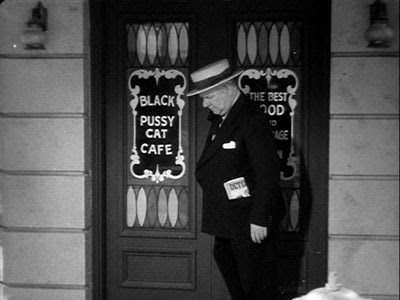 Most of the time, the movie only toys with violating the Hays Code (Sousé's curse of choice is "GOD-frey DAN-iels! MOTHER-of-pearl!"), but I was kind of amazed he got away with this one. The movie gets bogged down about halfway through when it starts to flirt with a plot. Sousé gets taken in by J. Frothingham Waterbury, the least convincing con artist in cinema history: 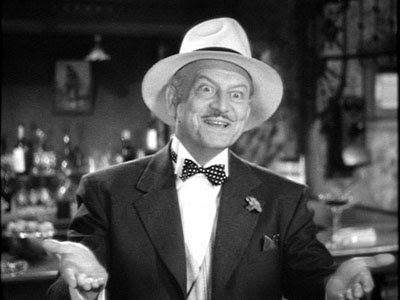 After convincing a coworker to invest $500 of the bank's money in the "Beefsteak Mines" shares Waterbury is selling, Sousé has to match wits with J. Pinkerton Snoopington, bank examiner, straight out of fuddy duddy central casting: 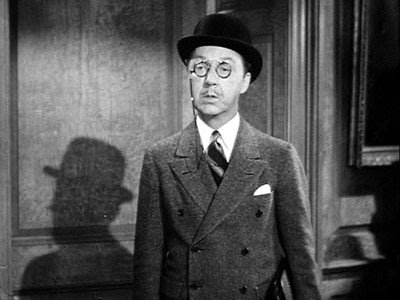 These parts of the film fell flat for me. And the final car chase struck me as tedious, although it does show a remarkable disregard for the safety of stuntmen: 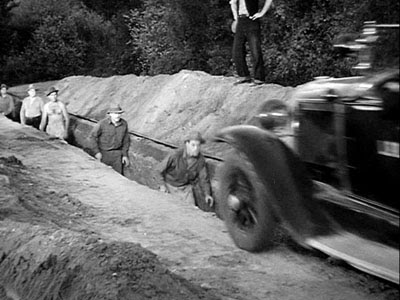 Basically, every scene The Bank Dick spends advancing the plot is a scene wasted; I would have been happier with a movie called W. C. Fields Hangs Out In A Bar And Then Beats Up An Eight-Year-Old. All the moving-the-plot-along drudgery does pay off nicely in the end, however: Egbert is redeemed, not because he has learned a damn thing, or changed a bit, but because he finds himself filthy rich. 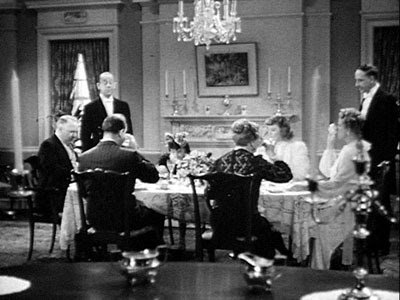 Most comedies from this time forgive a certain amount of anarchy at the beginning, but only because the worst impulses of the main characters are curbed. The genius of W. C. Fields, and his enduring appeal, lies in the fact that his characters continue to wallow in the muck; these are films where having a static main character is absolutely the right decision, Robert McKee be damned. The Bank Dick gives viewers what looks like a happy, if somewhat ridiculous ending; his mother in law, wife, and daughters all adore him (his daughter calls him pater noster!), and he no longer has to worry about losing the family home. But he's still a drunk with no interest in anyone around him. Fields really got something about the way we mistake wealth for character—the most cutting joke in the film comes as Egbert toddles off his estate to get drunk again. His family fondly watches him go. 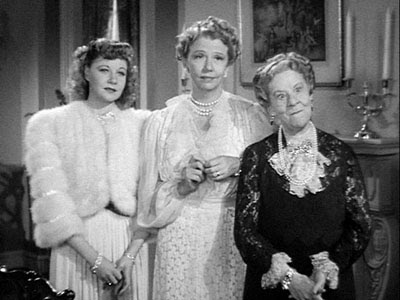 "What a changed man. You deserve a lot of credit, Agatha," says his mother-in-law. "Hasn't been easy," his wife replies. 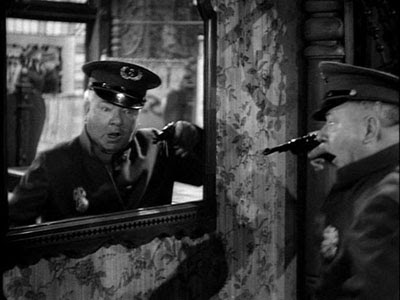 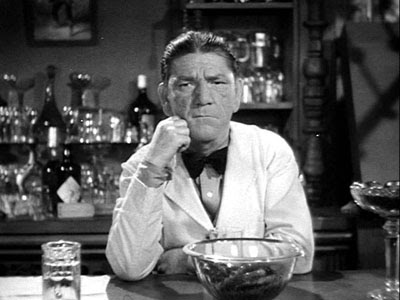 That's Shemp Howard of the Three Stooges, in a rare non-Stooges appearance.

reading about w.c. fields' antics ... i think the most contemporary equivalent, more in terms of character as oppose to an actor, is david brent in the original bbc production of the office. actually it would be better to describe david brent, in that post-modern deconstructionalist way, as the "anti-w.c. fields" in that his alcohol-fueled lucid humour is actually flat, even offensive/cringe-worthy.

"Egbert is redeemed, not because he has learned a damn thing, or changed a bit, but because he finds himself filthy rich."

Isn't that the only difference between a reviled drunk and child beater and a respected pater noster? A couple of million in the bank so people have the incentive to overlook the discretions and outright crimes they may commit?

I'm getting cynical in my old age! :-D

This film is positively classical in its story structure, compared to Never Give a Sucker an Even Break (which I like better).

Check out the Criterion short films of Fields. The best of them is probably The Destist, followed by The Fatal Glass of Beer.

DJProject, I quite agree, and there's at least one moment in The Pharmacist that reminds me very specifically of David Brent.

You're not getting cynical, you're paying attention. I liked the feature better than the shorts, just because I thought the jokes were better. And the inverted morals aren't quite complete in the shorts--Fields gets found out when he lies about catching the robber in The Barber Shop, for example.

I'll check out Never Give a Sucker an Even Break as soon as I've detoxed from the Six Short Films. Great title, that's for sure.

I borrowed the W. C. Fields Comedy Collection from the library, which included The Bank Dick, It's a Gift (highly recommended), My Little Chickadee, You Can't Cheat an Honest Man, International House, and a recommended Biography epiosde about W. C Fields. I'm particularly intrigued by the shrewish women W. C. Fields finds himself married to (particularly in It's a Gift and The Bank Dick. I can't quite decide if there is a misogynistic streak to the movies, or if there is a sly implication that the women have ended up this way because they are married to the Fields character. One can almost see how the Fields character and the female character reinforce each others worst tendencies.

Well, given that none of the shrewish characters seem to enjoy anything outside of tormenting Fields, I think the smart money's on "mysogynistic streak..."

I just finished watching it an hour ago. Great review. I don't think I've laughed harder at a man getting punched through a window. That just came out of nowhere!

I don't know if it's fair to call Fields a misogynist because the women in his movies mostly are sour, hateful people who only derive joy from tormenting him- that's broadly true of everyone in his movies, man, woman, and child.

For the scene where Sousé meets Waterbury, visit my blog: http://meandyobo.blogspot.com/2006/10/dont-be-luddy-duddy-friend-recently.html.
What I noticed when I transcribed the dialogue was what a shameless scene-stealer Fields was. He constantly interrupted Russell Hicks, who was such a pro that he didn't seem to be bothered by Fields' shenanigans.

For example, there's this:
Waterbury: Now, these shares are selling for ten cents a share.
Fields backs into a table, impaling himself on a fork. Squealing, he removes it.

A little later, Waterbury is describing the scene at the Fields mansion if he buys the Beefsteak shares:
Waterbury: Ham and cheese on rye -
Sousé: With mustard. We have plenty of mustard at the house, yeah.
Waterbury: Yes. And then this guy comes up the shady drive in an armored car from the bank, and he dumps a whole basket of coupons worth hundreds of thousands of dollars in your lap. And he says, "Sign here, please, on the dotted line."
Sousé: I'll have a fountain pen by that time.

They're perfect non sequiturs that serve only to bring the viewers' attention back to Fields.