Comedy is one of the hardest genres to write about. Even Robert McKee, who has rules for everything (Sorry! Not rules! Principles!) admits that when it comes to comedy structure, most bets are off. He adds:

Comedy is pure: if the audience laughs, it works; if it doesn't laugh, it doesn't work. End of discussion. That's why critics hate comedy; there's nothing to say.

In a nutshell, that's why comedies don't win Academy Awards, and comedies rarely end up in the Criterion Collection. The exceptions to this rule tend to be satires instead of pure comedies; satires may be "what closes on Saturday night" but you can write about them. Robert Koehler expressed this relatively common view on NPR recently, saying that he preferred Idiocracy to Little Miss Sunshine, because it was "one of the few [comedies of the year] with any ideas." That's true enough, and I liked Idiocracy. But Little Miss Sunshine's last scenes, clichéd as they were, made me laugh so hard I could barely breathe. Which brings me to Monty Python's Life Of Brian. By my count, this is the third comedy in the first 61 films of the collection—and that's only if you count Fishing With John as a comedy (I'd call it more of an oddity, really). Not surprisingly, you can read Life Of Brian as a trenchant satire, if you so choose (you boring, boring person). The only thing that really matters is that it's hilarious.

Life of Brian tells the story of a man born in Bethlehem around 4 BC, hailed as a religious leader during his brief ministry in his 30s, and crucified by the Romans for his trouble. Named Brian. And certainly not that guy from the major world religion, although they did end up in mangers next door to each other. 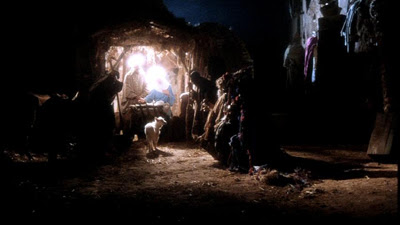 That shot of the Adoration is right after a scene in which the Magi mistakenly give their gold, frankincense, and myrrh to Brian's mother. Her name is not Mary but Mandy, she backhands Brian when he cries, and she's played by Terry Jones in drag, which should give you a pretty good idea of the level of seriousness on display here. Blessed art thou among women, indeed. 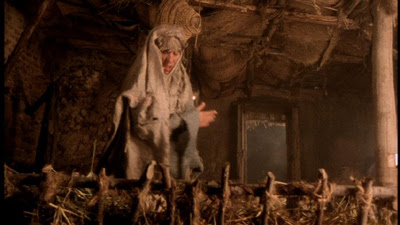 Like the Gospels, Life of Brian is more or less silent about anything that happened between Brian's infancy and adulthood, except for a remarkably silly song during the opening credits. The next person we see is actually not Brian, but his more famous contemporary. 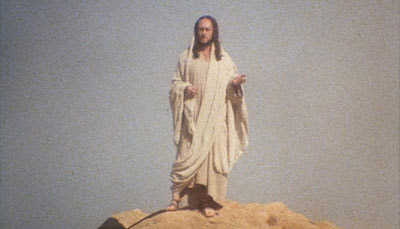 Brian is attending the Sermon on the Mount, however--as the magic of a 70's zoom lens reveals, he and Mandy are in the cheap seats. 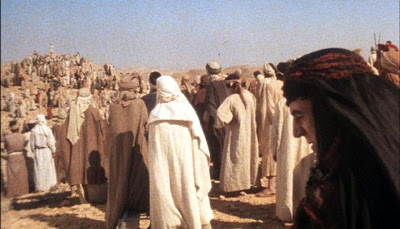 Notice, by the way, the strategically placed valley between the two hills, giving the impression that there's a crowd stretched all the way from Jesus to Mandy. Now that's where a good location manager can make your extras budget stretch a little further. And that's the last time Jesus has anything to do with the movie. Brian has grown into a cheap seats kind of man; he makes his living selling ocelot spleens and jaguar earlobes during children's matinees at the coliseum. Confused about his identity (his mother has just told him that his real father was a Roman named Naughtius Maximus), Brian falls in with a bad lot, a revolutionary group called the People's Front of Judea. They actually show up in the film earlier, critiquing Jesus' performance ("Blessed is just about everyone with a vested interest in the status quo, as far as I can tell...," "What Jesus blatantly fails to appreciate is that it's the meek who are the problem."). Brian gets involved with their incredibly ineffectual attempts to overthrow their Roman occupiers, and from then on, it's a straight road to his crucifixion. There's not a lot of plot or structure here, but there's more than in any of the other Monty Python films, which are closer to sketch comedy than features. Not that Life of Brian doesn't show its sketch comedy roots; most scenes spend very little time advancing the plot and lots of time going off on tangents. And you can hardly describe a film as tautly constructed when it has time for the main character to be abducted by rubbery aliens for no reason at all. 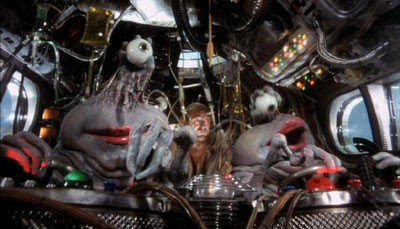 But in the relatively formless world of Monty Python movies, Life of Brian stands out as the best structured, the most movie-like of their efforts. And for a comedy, plot and structure are not as important as hilariousness, which Life of Brian has in spades.

As everyone who's finished middle school knows, Monty Python fans pride themselves on their ability to reenact sketches from the television show and the movies. I've been trying to write this without putting anyone through that, because people tend to have a visceral dislike of Monty Python from hearing nerdy kids doing horrible renditions of the Lumberjack Song. And many of the jokes in Life of Brian lose a lot if you take away their delivery. But I can't write about this movie without commending Michael Palin's Pontius Pilate. 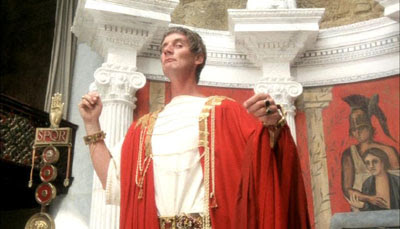 I can't say enough good things about the character, his performance, his speech impediment, or the jokes built around him, but just thinking about him cracks me up. You can see one of his scenes, in which he claims to have "a vewy gweat fweind in Wome called Biggus Dickus" here, at least until YouTube takes it down. The single greatest scene in the film, however, is Life of Brian's version of the release of Barabbas, where the crowd petitions Pilate for the freedom of non-existent prisoner after non-existent prisoner, just to hear him mispronounce his r's ("I will wewease Woddewick the Wobber!") Pilate's friend Biggus Dickus (Graham Chapman) tries to salvage the situation by reading the list of prisoners they actually have in custody. But of course, Biggus Dickus has a lisp, and the list of prisoners goes like this:

Silly and brilliant. You can make an argument that Life of Brian has a lot to say about mindless religious zeal, or political infighting among leftist movements, or Hollywood's relentlessly trivial Biblical epics of the 50's and 60's. But if you need more to motivation to see a movie than Graham Chapman talking with a lisp, this probably isn't your cup of tea. 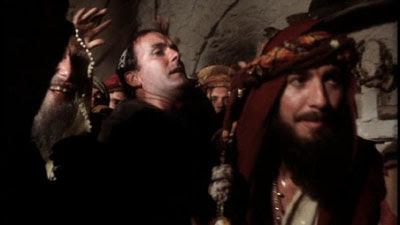 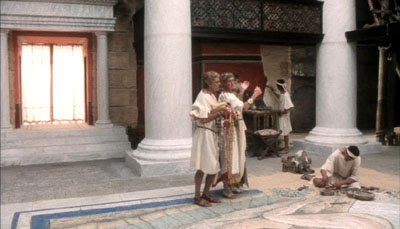 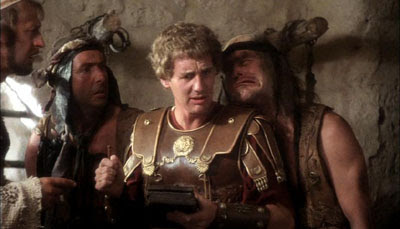 He also appears briefly as a mud-splattered street preacher raving about the end times: 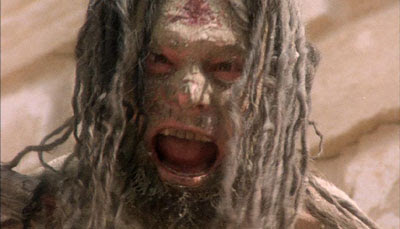 He's disturbingly convincing in both roles; I wonder if Sid Sheinberg had seen him in this movie when he got the idea that he would be good to work with on Brazil. In any event, I like to think that's how Gilliam shows up to meetings. 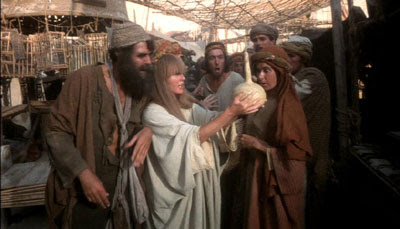 Cleese wanted to have the gourd fall and shatter, and have one of the followers pick up part of it and proclaim it "the piece of gourd which passeth all understanding."

Posted by Matthew Dessem at 9:08 PM

Hello again. Tonight I am writing with a question and the hope that you have time to answer it. That is, of course, if it's not against protocol to answer non-Criterion Collection questions. I recently saw Gus Van Sant's Gerry. I was intrigued by some elements of the film and puzzled by others. I am very interested to know what you think of it. If you have yet to see it, then let me simply ask: what do you think of Gus Van Sant's films in general? I have a great amount of respect for your opinion (as illustrated by my last message) and I would really love to hear your take. Thanks for your time.

Hello again. Tonight I am writing with a question and the hope that you have time to answer it. That is, of course, if it's not against protocol to answer non-Criterion Collection questions. I recently saw Gus Van Sant's Gerry. I was intrigued by some elements of the film and puzzled by others. I am very interested to know what you think of it. If you have yet to see it, then let me simply ask: what do you think of Gus Van Sant's films in general? I have a great amount of respect for your opinion (as illustrated by my last message) and I would really love to hear your take. Thanks for your time.

Jack, as per my usual slack-ass posting schedule, you'll find my response under The Passion of Joan of Arc. Sorry for the delay!

A fun fact I recently heard; I can't remember off-hand which Python it is doing it, but Harrison's voice in the film is dubbed by one of the Pythons, because he was unavailable and the original sound was unusable.

Unfortunately, Graham Chapman tried to make an entire movie full of similarly-pitched rape jokes and none of them worked (that would be 'Yellowbeard').

George Harrison had a pretty amazing career as a producer, albeit a very short one. Haven't seen "Yellowbeard," and probably won't!