Fishing With John, 1992, written and directed by John Lurie.

This is the first title in the collection that's not a feature. Instead, Fishing With John is a six-episode documentary fishing show in which actor/musician John Lurie goes fishing with celebrities. At first glance, Fishing With John has everything one would expect from a fishing show: bad video cinematography, dull conversation, and most importantly, a self-important narrator who solemnly explains what we're seeing. Here, for example, is part of the narration for the first episode, in which Lurie and Jim Jarmusch go shark fishing in Montauk:

Fascinating, our world today. With technology, man now knows more about his fellow man and the world he lives in than ever before. Yet we still know very little. We know very little, for example, about the topic of today's program: the shark. The shark has lived in the same form for millions of years. The word "Shark" came from the German word "shirke," which means "villain." How deep is the ocean? Nobody really knows for sure. Today's program and fishing adventure should prove to be fun. But it could also prove to be very, very dangerous. The shark has made fatal attacks on humans in every ocean in the world. There are 27 man-eating species of sharks. When it comes to the shark, man is on his menu.

You have to imagine that paragraph read by voiceover artist Robb Webb (who you've heard in a million trailers). It's the kind of blather that I usually just tune out, but here's the thing: none of it's true. Not even close. If the idea of a documentary voiceover that's filled with lies (and not jokes, really, just lies) strikes you as funny, you'll enjoy Fishing With John. It's a case study in really stretching the disconnect between visuals and voiceover. This is not for everyone: it requires an exceptionally dry sense of humor and a lot of patience, because the show is exceptionally silly. And I have my doubts whether it qualifies as great cinema, or great television, but it's certainly unique.

A fishing show is actually kind of a brilliant setting to use for this kind of experiment, because viewers are already trained to tune out while watching fishing, particularly to the narrators, who never say much of interest. Lurie does a good job of writing narration that seems plausible just long enough to make you start to tune out; then the narrator will say something like "Both fishermen are covered with sores and boners." Which doesn't make any kind of sense at all. This is not to say that all of the jokes and silliness is in the narration; far from it. Much of the rest of the fun comes from the fact that neither the guests nor the host know anything about fishing. Here, for example, is one of the shark fishing methods Jim Jarmusch and John Lurie try: 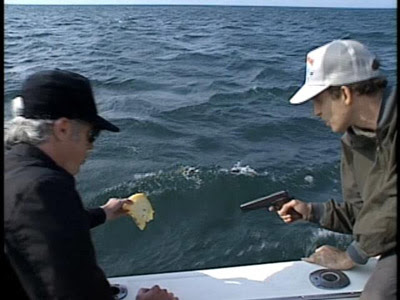 You can probably suss out how this is supposed to work. It doesn't.

Tom Waits, on the other hand, doesn't seem like a staggeringly incompetent fisherman, but when they finally catch a red snapper, he insists on putting the fish down his pants, because it helps with his depression: 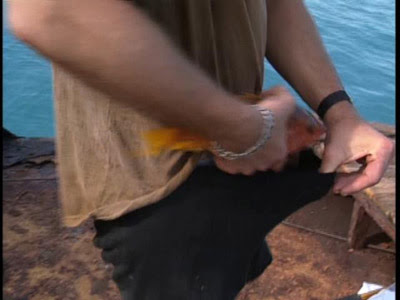 This fish is going to have a confusing last few seconds on earth.

The show is at its best, however, when Lurie doesn't play around too much with what's actually on screen and instead lets the disconnect between what we're seeing and what the narrator is describing get wider and wider. He gets better at this as the show goes along. The fourth episode, in which Lurie and Willem Dafoe go ice fishing in Maine, is the first one where he really goes crazy with this; the episode opens with both men having a good time, but not catching any fish: 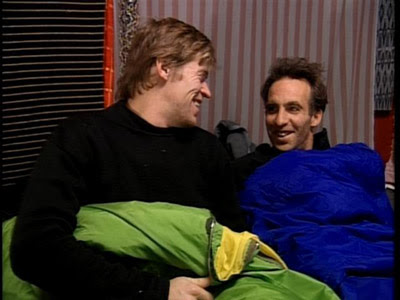 then shows them gradually getting colder and hungrier, until the last shot: 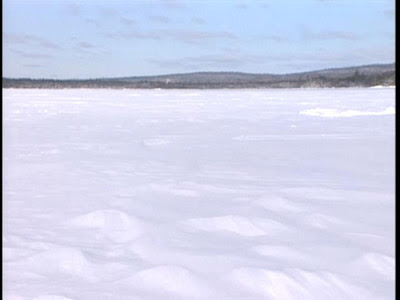 Over the shot above, Robb Webb intones, "On January 19th, John Lurie and Willem Dafoe died of starvation." And that's the end of the episode. As a footnote, when John appears in the next episode, the narrator says, "John's not dead after all. My mistake."

The disconnect between the narrator and what's on screen reaches its lunatic apotheosis during the last two episodes, a two-part story about fishing in Thailand with Dennis Hopper. As you can imagine, footage of Dennis Hopper fishing in Thailand is already pretty interesting, just because of how crazy and animated he is. Even in a silly hat, he looks like he could tear someone's throat out at any time: 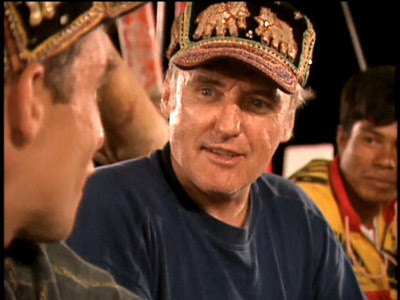 And there aren't that many people who can tell you stories about being thrown out of Cole Porter's house for drinking too much, or give their own ideas about a sequel to Easy Rider. So Lurie could have just let those episodes stand. But instead, he has the narrator superimpose his own version of what we're seeing: John and Dennis are going fishing for giant squid. It's apparent from the visuals (no one ever mentions squid at all) that this is the narrator's own idea. A few examples:

On screen: Footage of the captain of John and Dennis's boat ringing a bell.
Narration: "On the radio, the captain has heard a hysterical SOS from a nearby vessel. He believes this can only mean one thing: a giant squid!"

On screen: John and Dennis walking into an archway, or possibly a cave.
Narration: "In these caves, it is believed there are secrets as to the habits of the giant squid!"

On screen: John and Dennis asleep in their boat.
Narration: (having previously asserted that the giant squid can "hypnotize most mammals"): "John and Dennis... have been hypnotized!"

The calm, precise way in which the narrator keeps bending what's on screen to suit his own mad narrative is like a less tragic version of Pale Fire. Now I'm one of those people who thinks that a lie becomes funny if it's ridiculous enough and told with a straight enough face. So the show appealed to me, but it's definitely not for everyone. If the squid narration above didn't make you laugh, you should probably steer clear. There's not that much to learn about editing, cinematography, or structure from Fishing With John. And as I noted, it's not even a movie. So what's it doing in the Criterion Collection? My theory is this: If I'd seen this show on television, I would work my ass off to see that it was released on DVD, because no one I described it to would believe that it actually existed. So file this one under one of the less obvious goals of a DVD library: preserving the unbelievably odd. 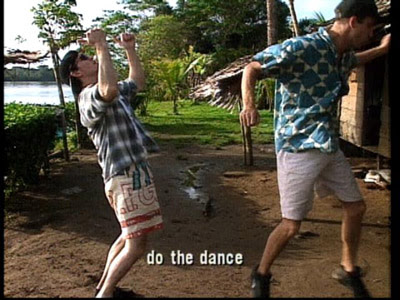 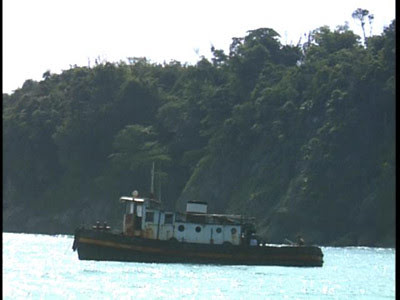 The boat was unbelievably rusty and cut both John and Tom's shins to ribbons, which no doubt had something to do with Tom's terrible mood. 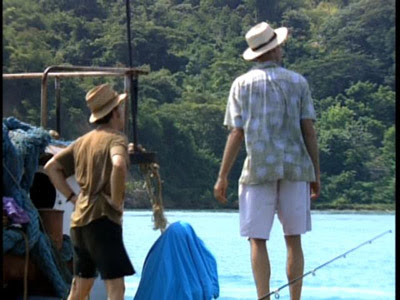 If you answered "The camera guy hiding under a blue blanket," you're right. Here he is again: 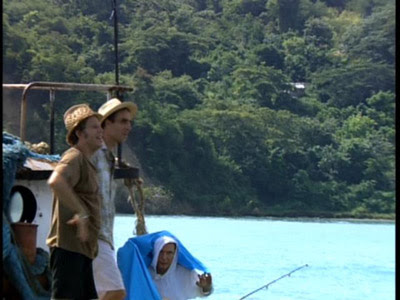 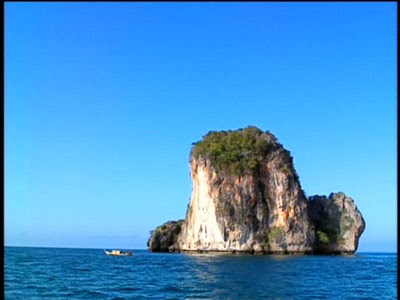 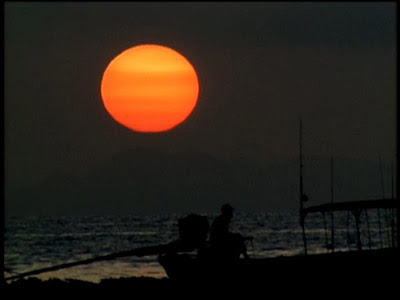 Looking at these locations, I can only conclude that I should start my own fishing show as soon as possible.

Posted by Matthew Dessem at 9:15 PM

Thank you for the being the first person to explain this dvd. I was thinking about blind buying it since I love most Criterions. I just came across your blog and I must say that it is excellent. Great work!

I've never seem somebody summarize the appeal of Fishing with John so well. I had it on my wishlist and somebody got it for me one Christmas a few years ago, and I pull it out every few months to laugh myself silly.

This is definitely one of those love-it-or-hate-it cases. But reading this post reminds me of all the good times I've had, out on the waaaaater...

A similar point that I've made before, but there's probably a market for these reviews, possibly in book form.

Towards that end, Lulu (the same people who published my "Major Major" novella) has a service to turn blogs into "blooks".

Rob, glad to be of help. There really isn't a lot of information about this one out there. Thanks for the kind words about the blog. Modium, yeah, I think I'm going to have to buy a copy of this one too -- it's definitely one of those things that would be great to be able to watch whenever the mood strikes (i.e., at two in the morning, when I'm not all that sober). & Jody, thanks for the tip -- I'll look into it. One problem I forsee is that I couldn't possibly clear or pay for the stills I'm using here, so I think this might have to stay a website.

I hereby declare this--the Best Blog on the internet.

Shreerang, I can only assume you haven't seen many blogs. But thanks--I'm glad you like it!

Wow, excellently done. I've been living under a rock it seems where Criterion is concerned, I had no idea it existed. At this point of time, out of the other reviews you've done, have you found any other titles that rival the comedic genius contained within Fishing With John? I'd be interested because I'd hate to know there's this calibre of comedy passing me by.

Yeah, the Criterion Collection is a good thing to know about, especially if, like me, you know very little about foreign film and want to learn more. As far as comedic genius goes, the collection is surprisingly short on comedies. My favorites, not all of which I have written about yet, are This Is Spinal Tap, Shock Corridor (not really a comedy, but very funny), Blood For Dracula (see Shock Corridor), Life of Brian, Rushmore, Sullivan's Travels, Kicking and Screaming, and of course, General Idi Amin Dada (see Shock Corridor...).

I showed an episode to a potential paramour, who found it unbearably dull. Thanks Mr. Lurie, for helping me dodge a bullet.

A pretty good litmus test. Of course, the fact that you liked "Fishing with John" may mean you failed a litmus test in your paramour's eyes as well...

This is a great writeup, but it's almost a shame to tell people what they're in for with this, which is one of the great blind buys of my life.

I sprung it on my brother, a fishing nut who actually watches real fishing shows sometimes, and it was interesting to watch the "did I really just hear that" look flash across his face at lines like the narrator's "I'd really like a bite of your sandwich."

Wow, talk about dry, which is ironic in a fishing show. This one is going to my youngest brother, who lives in Colorado and is an avid fly fisherman. I find Fishing With John far funnier in the retelling than in the viewing. I’m unsure why. I’m also unsure how it jibes with Criterion’s mandate, but at least it was an opportunity to familiarize myself with the unfamiliar and “unbelievably odd.” And speaking of the unbelievably odd: J. D. Salinger agreed to do one of these shows.