Nanook of the North, 1922, written and directed by Robert J. Flaherty.

When I was maybe four or five years old and I'd get bundled up to play in the snow, my parents used to say that I looked like Nanook of the North. It was one of those things that delighted me at that age; it was so weird and silly and fun to say. Try it: Nanook, Nanook, Nanook! Of the North! Anyway, I got it in my head that Nanook was some sort of character from a book. Which is close enough for a four-year-old, I guess. As it turns out, Nanook was an actual person, the subject of one of the first feature-length documentaries, a model for every documentary and ethnographic film that followed.

Flaherty made Nanook of the North in 1922, shooting members of the Itivimuit tribe in the Hudson Bay area; it's subtitled "A story of life and love in the actual arctic." His aim was to capture the traditional life of the Itivimuit before it vanished. He shows Nanook and his family doing all the things Itivimuits do best: hunting walruses, spear fishing, building igloos, eating Eskimo Pies, and so on. The film purports to be a faithful attempt to capture the Itivimuit way of life before it disappeared. However, as Dean W. Duncan points out, it had already disappeared; Flaherty staged sequences, made the Itivimuit he was filming wear traditional clothes they had abandoned by that time, and by all accounts played fast and loose with the truth. Nanook wasn't even related to his "family" in the movie; they were simply the best looking Eskimos Flaherty could find. On the other hand, you can't fake this: 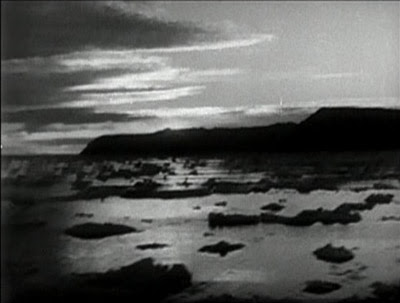 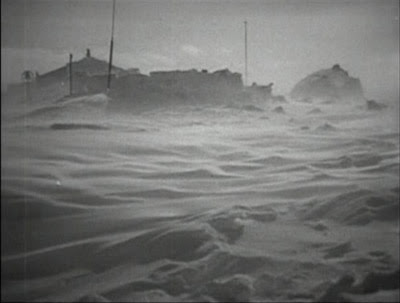 Modern audiences are inured to movies about arctic life (or any far-flung corner of the globe) but we have people like Flaherty to thank for it. Imagine seeing this movie for the first time in New York City or Paris in 1922 and being taken to a part of the landscape like those above. It might as well have been another planet. I think bringing back these kinds of images is one of film's highest callings: Show me something I have never seen before. Flaherty understood that, and all the fakery and false romanticism in Nanook of the North doesn't change that basic thing he got exactly right.

All this talk of fakery makes Nanook of the North sound much more condescending than it is. Nanook and his family may be essentially a fictional creation, but Flaherty packs the film with details that have a powerful cumulative effect. He shows the viewer, step by step, how Nanook ekes out a life from his inhospitable surroundings, and some of it is revelatory. For example, I've always thought spear fishing must require superhuman reflexes; how else could someone hit a moving, slippery target like a salmon with a spear? The answer, it turns out, is to use a spear shaped like a fork; the reverse wedge of the outer prongs draws the fish onto the spear, and an approximate hit will do the job. 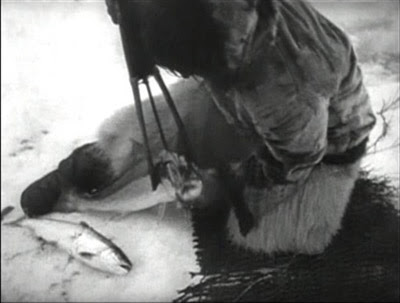 Similarly, Flaherty captures enough practical details of hunting seal and walrus and igloo construction to demystify Nanook's life. It's almost enough to make you want to have a go at northern life, until you remember that Nanook starved to death shortly after the film's completion.

There's obviously a great case to be made for the historical importance of Nanook of the North, but I don't think historical importance is ever a good reason to see a movie. Obviously, you can also learn a lot from the movie if you're planning on becoming an Eskimo. But can you learn anything from it as a filmmaker or moviegoer? My roommate thinks this is one of the most boring movies he's ever seen; I certainly wouldn't call it the most exciting thing I've seen (I thought about writing a review that read, in its entirety, "Nanook of the North? More like Nanook of the Boring!" but then thought better of it). I took back two lessons from this movie: 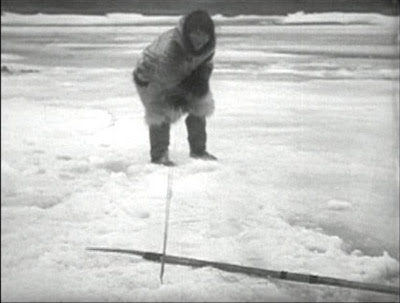 Of course, as it turns out, the seal he eventually hauls up was already dead, and Flaherty had people off camera pulling the rope. Still, I think you could use this scene to great effect in a "they came from below!" type movie like Tremors or The War of the Worlds. (For all I know, they did use this scene in Tremors, which I haven't seen recently enough to remember).

I guess that's actually more like one lesson and one scene to steal. Which isn't enough to make for a very strong recommendation. I enjoyed Nanook of the North, but the pleasures it offers are all pretty austere. If you're the kind of person who finds old home movies of people you don't know to be poignant, you'll like this; I am, and I did. There's something magical to me about seeing someone who died before my grandfather was born laughing and mugging for the camera, imagining what it would have been like to live his life, with its completely alien details. It's a testament to Flaherty's skill that he makes that imaginative identification possible, given the absolute strangeness of Nanook's life. Measured against that achievement, what's a few staged scenes between friends? 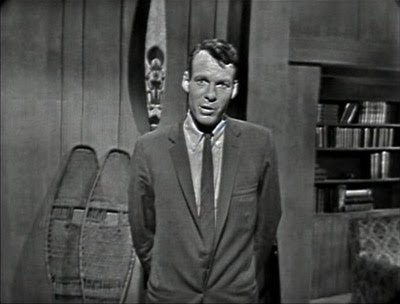 I'm Robert Gardner, from the Peabody Museum at Harvard. Within forty years, no one will be able to introduce themselves like this with a straight face. Still, my suit and narrow tie are cooler than anything they will ever be able to buy, vintage stores or no.

Just kidding. I'll close with one of Robert Flaherty's still photographs, also included on the DVD, which stand up next to Ansel Adams for nature photography or Dorothea Lange's portraits. This one you've probably seen, and I always thought it was Adams. Nope. 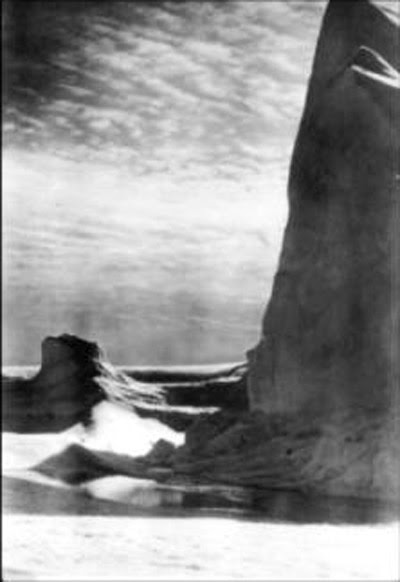 Posted by Matthew Dessem at 9:13 PM

Great writeup yet again. You really need to publicize this blog more. I think you have a book deal in the making here.

Thanks, man! It really means a lot to me that you're enjoying this; I think I'm getting better at it. But I'd still rather write movies than write about movies, so I'm going to keep this filed mentally under self-education. That said, if you have any ideas on ways to publicize the project I'll take your advice.

Thanks for this interesting analysis of Nanook.

You might like to have a look at "How to Build an Igloo", a very short documentary produced en 1950 by the National Film Board of Canada. There's a short portion of the movie available at :

Glad you liked the post. Thanks for the link to the clip -- I checked it out. It confirms one thing I was already pretty sure of: any igloo I tried to build would be a disaster.

Hey, nice job. I just put a video of nanook of the north up on my blog!

Sweet! You didn't provide a link, so I will.

There are several key scenes in Cactus Flower that take place inside a nightclub in Greenwich Village. The exteriors for these scenes were shot on the southeast corner of Ninth Street and Sixth Avenue in Manhattan, outside a then popular establishment called Trudy Hellers. That’s my corner. It’s where I grew up (on Ninth between Fifth and Sixth), and I remember standing across the street watching Ingrid Bergman, Walter Matthau and Goldie Hawn walking in and out (and in and out) of that club. No one would call Cactus Flower a documentary, but if you want to see what my corner looked like when I was twelve, there is no better or more accurate source.

We pigeonhole films into either documentary or narrative categories, but that is a false dichotomy. There is a fairly smooth continuum between the two extremes: objective documentaries and newsreels, subjective documentaries, documentaries with re-enacted scenes, narrative films based on historical events, fictive films shot on location, studio films, and perhaps animation at the opposite end of the spectrum. Most (if not all) films are hybrids. There is some artifice in even the most stringently objective documentary, and an animated space fantasy will probably still tell us a little something about when and where it was made. So Nanook of the North, with some staged scenes, is a hybrid, more documentary than not. This doesn’t diminish the value or impact of this film.

What is important are the answers to two questions: what was Flaherty’s goal in making the film? He wanted to show us a way of life that was rapidly vanishing (or more accurately had recently vanished). And how true was his aim? For all the talk of fakery/deceit by nearly everyone who discusses this film, I’ve not seen any accusation of inaccuracy (ie. Flaherty does in fact show us how an igloo was built; that is, in fact, how walrus was once hunted). I had never seen these things before, and if that is one of film’s highest callings, to show us things we have neer seen before, then 88 years later Nanook of the North continues to succeed quite brilliantly.