Grand Illusion (1937, directed by Jean Renoir, written by Jean Renoir and Charles Spaak) isn't the kind of movie I usually go nuts about, but I did enjoy it. It's set, for the most part, in a series of German POW camps during World War One. Renoir got the idea for the story from a pilot he knew during the war who was shot down seven times, captured by the Germans seven times, and escaped from POW camps seven times. Renoir was himself a pilot; the DVD features a still of him in a completely ridiculous all-wooden plane. Anyway, the movie isn't really much like the idea; it's not a Stalag 17 or whatever. You only see one actual escape attempt (though a few happen off-screen). Mostly, it's about I'd seen one other Renoir movie before this one, The Rules of the Game. Which, incidentally, is fantastic.

Grand Illusion isn't quite my cup of tea. Renoir's thing is kind of elaborate shots that have been really carefully blocked out and framed. An example in this movie is a really neat shot where the camera circles around a dinner table; although the conversation seems natural, everyone who's talking is in frame as the camera goes counter-clockwise. It's really claustrophobic and cool; and it's also been copied and refined since then. Shoulders of giants and all that: Scorsese does the same stuff, but better. Not a fair comparison, because he had better equipment and much more money. But because I saw Goodfellas before Grand Illusion, I wasn't as surprised or amazed by the camera work as I might have been otherwise. And yes, yes, Scorsese wouldn't have been able to do his thing without studying Renoir and people who learned from him, but the end result is that although the camera work is really, really impressive in this movie, I appreciated it abstractly more than viscerally. T.S. Eliot (who I've been loathe to quote since a high school phase, but wait for it):

Someone said: "The dead writers are remote from us because we know so much more than they did." Precisely, and they are what we know.

So, you know, Renoir's got that going for him. I mean, Eliot's right, and it's the reason for studying older art generally. But in film more than other arts, there's a thrill in seeing something being done for the first time that can't be reproduced by watching a movie nearly seventy years after the fact. And I think it has a lot to do with the fact that film is so dependent on technology, in a way that literature isn't; writing hasn't really changed that much in the last thousand years. Don't get me wrong--there are techniques that are developed and refined over time, and writers build on their forebears. But it's still language; it's not like that has been improved on so much recently. Not like, say, Steadicams. The movies I think are really great are about narrative, not technique, and they stand up. Grand Illusion has a lot of very obvious technique, so some of it feels dated; what my friend Adam calls a "homework movie."

The acting is quality: Erich Von Stroheim is great as a German career officer. He shoots down the two main characters at the beginning of the war, and disappears from the movie till about the halfway point, when he's been seriously injured and is running a prison camp that's supposed to be impossible to escape from. Once injured, he limps around in a corset and neck brace, wearing white gloves to cover horrific burns. He's better in Sunset Boulevard but he's pretty amazing here. And the shot that announces his return is a classic horror-movie style thing; the camera tracks over all his (really bizarre) possessions, then settles on his orderly, getting his white gloves ready, follows him all over the room, and finally puts Von Stroheim in the frame. Picture worth a thousand words: 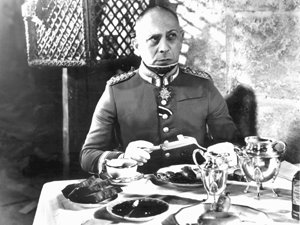 The DVD has a really cool extra on the restoration of the film; a little of the history. The movie was released in 1937. There was an American version, much shorter. Grand Illusion in this version screened at the White House on Eleanor Roosevelt's birthday--after seeing it, FDR said "Everyone who believes in democracy should see this film." I think politicians should endorse movies and books more often; this is a good start. The Nazis banned the movie, but they saved a print or two. When Berlin fell, these were shipped back to Moscow by the Russians, who looted the German film archives (well, not so much looted as "carefully catalogued," but still). In 1958, a restored version was made from a duped negative; it was very scratchy, and the whole right side of the film was blurry. Criterion did a restoration job on this version in the eighties, but it was still pretty scratchy and blurry. In the early nineties, though, the original camera negative (the film that was actually running through the camera when it was shot) was found in the Russian film archives, and that's what Criterion restored for this edition. The featurette shows each version; you see the scratches, hair, cigarette burns, and blurry focus disappear with each successive restoration.

Random notes and things I liked:

Next up, Seven Samurai.

Posted by Matthew Dessem at 9:52 PM

Sorry, Matthew, you missed the point. This is a war movie but it's making a point about peace. The "third act" as you call it is a brief look at real life without all this nonsense about honor and glory. And the so-called "epilogue" -- Man, I felt my heart lift when I heard the German give his order. I've seen so many anti-war movies where everybody gets shot and the viewer has to be miserable. This is a feel-good anti-war movie.

Yeah -- this was the second one of these movies I wrote about. This project has made me a better movie viewer, I think; I should rewatch this.

"Mostly, it's about I'd seen one other Renoir movie before this one"

FYI - it looks like you did a little cut and paste work in your first paragraph and never got back to your original thought.

Either that, or 'Grand Illusion' is about your experience watching 'The Rules of the Game'? :)

I'm gonna just go ahead and rewrite this one.

I keep meaning to rewrite these early, terrible reviews; after all, it's been six years, and I wasn't really trying. So far, I haven't found the time. But I do find myself with just enough time to review your anonymous blog comment:

Despite the author's clever—and correct—use of em-dashes, it's hard to see much substance behind the twin shields of sarcasm and anonymity. The time stamp reveals that the message was left at 5:16 in the morning, from somewhere in San Francisco. I sincerely hope that this comment was co-written by alcohol or cocaine. The alternative—that someone was awake at five in the morning reading reviews of The Grand Illusion on the internet, and felt just brave enough to write this comment, but not quite brave enough to sign their name—is unspeakably depressing.

I've just discovered your marvelous movie blog about the best collection in DVD! Wow! I've just finished Jean Renoir's autobiography and he states that with La Grande Illusion he wanted to influence the greats of this world and stop the coming of the Second World War. Well, as noble as La Grande Illusion is and with all the respect I have for the man himself I think it was a little naive from him. But, the film he made is one of the most beautiful films ever made in film history!

I should really rewatch this soon!

re: "Anonymous" troll - I thought TIKI BAR TV handled it best when they had Limey Bastard say "You know, it takes a lot of courage to come out in front of God and everybody and express your opinion...Anonymous...." Of course, from there it sort of went downhill as they insulted Anonymous's Mother for the rest of the episode - but that's what happens when you take on a group of very smart, creative and drunk comedy writers! >:)